Outside, the skeletons of trees bowed deeply to the earth, their branches covered in ice.

He didn't watch but listened as Satan's Bitches descended upon a small group of survivors in the long stretch of snow in the valley below.
He had dragged himself waist deep through that snow a turn of the moon ago, or was it two turns? There was no need for days or weeks or months any more.

He pressed himself down on the ground , praying the dirt would hide the sound of his breath from escaping the cave and moving to the valley floor, where the Hornets could hear him. When they descended on someone, they screamed and buzzed like a furious swarm. Some Grunt from the Phoenix Second had given the Bots that name for when they killed in a pack. And, so the term “Hornets” stuck.

He lifted himself off the ground, dirt caked in his mouth and turned to her .

His mouth watered at the thought of food, he couldn’t remember how long ago it was when he actually felt guilt for eating the headless corpse of someone from his platoon.

Her eyes were half closed. She was often silent. But that’s what he loved about her.

‘There comes a time in every life when all gets quiet and the only thing left is love. ‘ He thought. He knew her heart, through her silence.

“We’ll rest now” He spat out the grime from his mouth, then glanced quickly to see if his disgusting behaviour annoyed her.

He walked over to her, lay his head in her lap, within a wink, he slept.

Again, nightmares of the Bloodless Witch possessed him. Her flesh half rotten, her right arm had been ripped off and only a shredded metallic stump covered in dried blood and flesh was left. Her other arm a giant gun. She walked with purpose towards him, the leader of their rebellion, and his courage failed him.
He felt the piss warm the rotted clothes left covering his skeletal leg. He also smelt the rot of dead flesh, he did not know if it was hers or his.

The Bloodless Witch raised her left arm, not that it much resembled a human arm so much as an amalgamation of metal and foetid meat ending in a barrel that dealt out death and pointed it at Mahtos' eye. He looked over her female form that was covered in sparse ripped cloth as filthy as the ragged Buffalo hide pants he had just defecated in.

He woke and knew by the reek that his dream had made him urinate. He worried Epsilom would know.

Looking up he raised his hand and cupped Epsilons’ metallic and rotted flesh cheek.


That's quite a grotesque and gritty picture you painted there.

I'm just so impressed you managed to fit as much disgusting imagery as you did into just a few paragraphs and still turn out a stellar story. I've always thought this forum needs a little more rotting flesh and faecies...

Well actually I haven't, but now I think it does... Any chance of getting a 'bloody stump' emoticon masqua?


Gory, yes, but not so stomach wrenching as to make one stop reading. Pretty good, actually, as we don't get much gore around these parts very often. SnF.

Thanks for tossing a story into this month's contest!


What's weird is I'm not into gore.

Its also just one story I have in mind of what may happen during extreme conditions. Highlighting the need for love, repercussions from humanities laziness and what male concerns over the female ideal can lead to.

BTW in the rest of the story, the Fembots may not be the bad guys Not sure I'll ever find time for more of it

Thanks for taking the time to read.

Zazzbot,
Leader of the Fembot Rebellion


Thank you for the story.

So what inspired this Fembot concept? Just curious.

I also want to know what served as your inspiration?

Thank you for sharing this with me... Keep writing! If you do, I will keep reading!


That and a daily greasing.

It reminded me a bit of this, 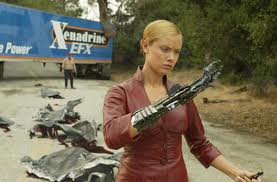 (not saying your story wasn't original )
edit on 9-8-2012 by DjangoPhat because: (no reason given)


Its my avatar that gave me the idea.....and Ive been the zazzbot for years here on ATS and Twitter.

Didn't think of terminator, kinda hope I conveyed a very new story idea and apocalyptic world all together in a handful of paragraphs....
edit on 9-8-2012 by zazzafrazz because: (no reason given)


Lol, sorry that was not my intention. You definately created your own unique world.

And I know you from the time when you were into the Snuffalupagus, at least that was you right? Lol.
edit on 9-8-2012 by DjangoPhat because: (no reason given)

There was a member a few years back that had that Snuffy guy as avatar and was always going on about it.

I could've sworn the member was named Zazzafrazz.
edit on 9-8-2012 by DjangoPhat because: (no reason given)


Mr Snufflelufugis and the muppets are the ultimate Anthropomorphic characters

Nope that wasn't me.


Sorry for the mistaken identity.


Mr Snufflelufugis and the muppets are the ultimate Anthropomorphic characters

Why do you value that? Again, out of curiosity.

edit, I guess you mean with regards to the Fembots being anthropomorphic.
edit on 9-8-2012 by DjangoPhat because: (no reason given)


It's the short story challenge, jump in and have a crack


Aha, that explains a lot.


Your story gave me a reminder of the Fallout series, especially the apocalyptic feel that came with it. Well done zazz. $&F


Never saw that! But have been meaning to

Short but very graphic in detail and not gory as others have said but vivid in it's bleakness.