A mysterious blotch that appeared along the horizon in a photo from the surface of Mars stirred speculation about what it might be, as two hours later it was gone. One image from the Curiosity rover as it landed on the fourth planet from the sun showed a "faint but distinctive" image on the horizon, the Los Angeles Times reported. However, a subsequent batch of images sent from the unmanned rover two hours later showed no trace of the blotch. 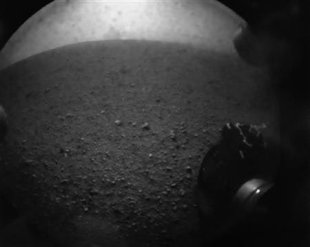 I watched the landing live on NASA TV. This was the first photo that the rover sent back to earth.

I happened to notice the object when they showed the photo for the first time, seconds after download, and I thought 'What is that in the background?". I thought they would say something about it then, but nothing was said, so I disregarded it, until I saw this story.

Now I'm more baffled about what this is. What do you guys think about it?


The JPL site has linearized versions of the photo and show it in relation with the panorama .. not much to it if you ask me..

Thanks Phage. Did a search on with the title of the article, nothing came up.
So disregarud this thread.

Isn't that just a waste of tax payer's money...that whole project and the entire laboratory? That's tax money flushed down the toilet of the Jet Propulsion Lavatory. I guess the cope and scale of the waste makes involved is not a laughing matter by any means.

JPL needs to be sold off to a consortium comprised of schools such as MIT, companies like Boeing, and the DoD.

Then the administration can be staffed with pro "real" energy solution seekers, not the global warming nut bags it's staffed with now where they think they have assumed the duties of NOAA. Idiots!