Yes, I know that what I am saying about this lastest Nasa Hoax Landing of The Curiosity Rover will be loudly ridiculed and laughed at and will not be believed by the majority of the TV brain washed masses world wide. However there are many, many real thinkers world wide who will completely agree with what I say, and they will not be fooled by the ongoing nasa and .gov scams either.

No one on the earth can Prove that Nasa has landed the new Curiosity Rover on Mars period. No one on earth can hop on their private space ship, blast off to Mars, and then Verifiy with their own eyes and personal photographs that " Yes " the new Mars Rover Curiosity is Actually sitting on the surface of Mars right now.

Anyone with any type of common sense at all realizes this fact, and it is " The Actual Fact " concerning this whole subject of the so called landing of the new Mars rover Curiosity on Mars.

All of the Photo's could have been taken " Anywhere " and all of the photo's that Nasa is showing are most likely taken in a very large specially prepared " Movie Studio " set up and built just for this latest nasa scam.

Of course for the millions and millions of people world wide who will still believe any and everything that nasa and any government will tell them, this will provide endless hours of " shock & awe " photographs and film footage that will help occupy all of the masses of simpletons for many many weeks and months and years to come. So have fun with this latest nasa scam, and when you grow tired of it in the months and years to come, there are many many other high tech games and animations in games and movies that everyone can play with in the years ahead.

More entertainment photo's and videos below for those that believe anything that nasa and the .gov tell them... 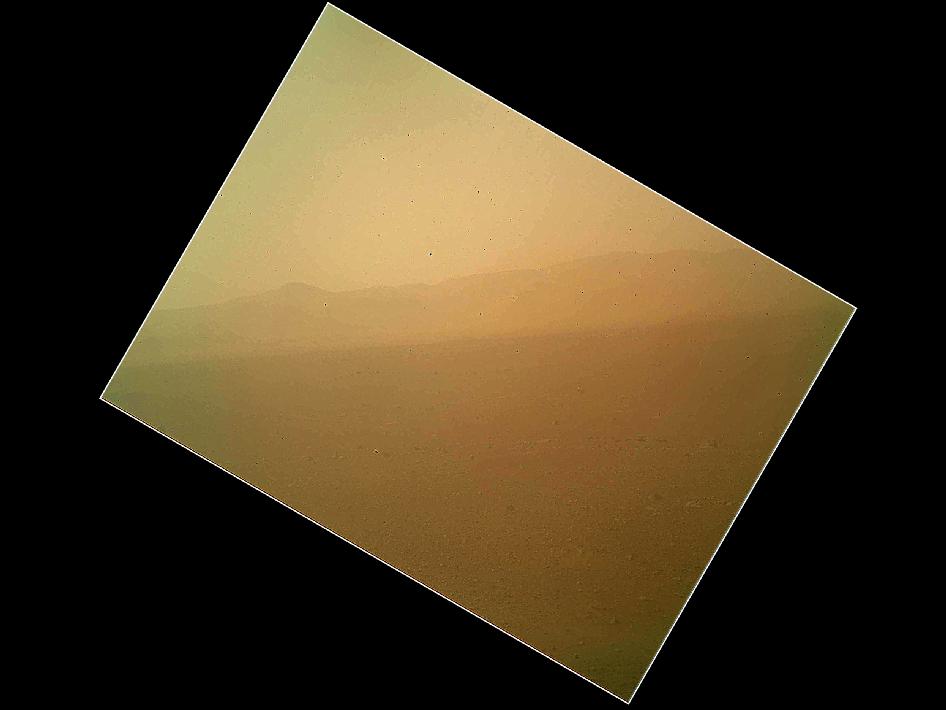 This view of the landscape to the north of NASA's Mars rover Curiosity was acquired by the Mars Hand Lens Imager (MAHLI) on the afternoon of the first day after landing. (The team calls this day Sol 1, which is the first Martian day of operations; Sol 1 began on Aug. 6, 2012.)

In the distance, the image shows the north wall and rim of Gale Crater. The image is murky because the MAHLI's removable dust cover is apparently coated with dust blown onto the camera during the rover's terminal descent. Images taken without the dust cover in place are expected during checkout of the robotic arm in coming weeks.

The MAHLI is located on the turret at the end of Curiosity's robotic arm. At the time the MAHLI Sol 1 image was acquired, the robotic arm was in its stowed position. It has been stowed since the rover was packaged for its Nov. 26, 2011, launch.

The MAHLI has a transparent dust cover. This image was acquired with the dust cover closed. The cover will not be opened until more than a week after the landing.

When the robotic arm, turret, and MAHLI are stowed, the MAHLI is in a position that is rotated 30 degrees relative to the rover deck. The MAHLI image shown here has been rotated to correct for that tilt, so that the sky is "up" and the ground is "down".

When the robotic arm, turret, and MAHLI are stowed, the MAHLI is looking out from the front left side of the rover. This is much like the view from the driver's side of cars sold in the USA.

The main purpose of Curiosity's MAHLI camera is to acquire close-up, high-resolution views of rocks and soil at the rover's Gale Crater field site. The camera is capable of focusing on any target at distances of about 0.8 inch (2.1 centimeters) to infinity. This means it can, as shown here, also obtain pictures of the Martian landscape.


Also - An Animation Game below Provided by Nasa for those that want to play along too...

This animation shows the approximate true position of NASA’s Curiosity rover on Mars. A 3-D virtual model of Curiosity is shown inside Gale Crater, near Mount Sharp, Curiosity’s ultimate destination.

Like any wise hiker heading out on a trip, Curiosity will do a self-check to make sure her tools are working before she makes her way to the foot of Mount Sharp.

Your OPINION is what everyone should be agreeing with?

Do you have any proof of your accusations? Any?

I mean its inevitable really, what with after the whole "faked" moon debacle and what not.

Although I do not particularly agree with the OP here, I do not see the need to mock or flame the person for posting this thread.


Considering the tech level we where at at the time of the supposed moon landings, i can understand the skeptics that doubt the moon landings ever took place, and you have to admit, they have some pretty good evidence for that being faked as well. However, at the tech level we are today, with computers being so mainstream and advanced, iphones everywhere, with built in GPS:es whch would never function without the satellites etc... i find it way more plausible that they are actually on Mars right now. Although it is true, we cannot possibly verify this ourselves, it is possible these pictures are taken in some desert on earth even...

Originally posted by magma
Imagine what you could achieve if you used your talents in a productive way.

and flying to Mars to see a lifeless plantet we could have looked at thru our telescopes/Hubble.....

Right now i am having a cup of tea, i could prove it with a picture of me with a cup of tea in my hand or by streaming it with my webcam, but you could only really trust me if you were here watching me having a cup of tea, and still it could be a hologram, so you would have to actually touch me to believe it.

It's a damn good cup of tea though 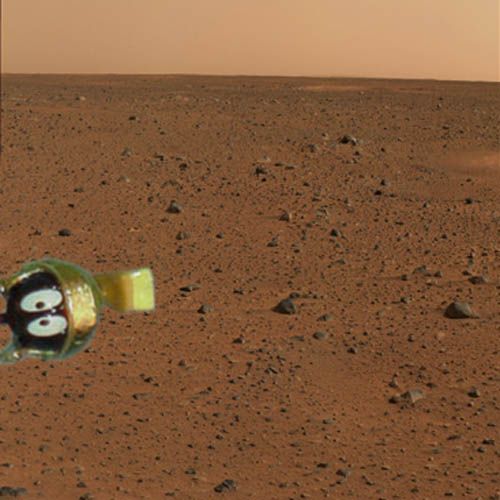 
Like some other ATS members I also expected it was just a matter of time before a thread like this would pop-up. And for a site like ATS it should...

The time we live in has become like the boy who cries wolf... It has become a matter of trust,...can you trust your government?

But to hoax this complex hoax project just for supplying a bunch of talented scientist with a handsome salary makes no sense....even if they are not aware of their manipulation. If it is a hoax it must be for something more meaningful....at least.....unless they are plain idiots of course.....which I doubt.


You sir do have tickets upon yourself don't you?

You can't prove that Curiosity didn't go to Mars, so I fail to understand why you are so certain about it?

Acting so high and mighty just alienates you from everyone, even those that may agree with you.

posted on Aug, 7 2012 @ 06:45 AM
link
how do we know your post is not fake? maybe the govt is trying to make ATS members not to believe!!
unless nasa employed a bunch of actors for mission control,their actions seem pretty damn convincing after the landing!!! tears and all!!!
why waste trillions of dollars to fake this?? what would be the purpose?
i think tptb would be smart enough to use their cash on a more 'earthly' distraction,like another 9/11.
i guess the iss is fake too,and all the satalites orbiting the earth are fake!
even ats is not real,the whole internet is make believe!
its all a dream,now go back to sleep.


You have a point

posted on Aug, 7 2012 @ 06:50 AM
link
While I most certainly believe that the television does actually program people...
The distraction comes from other things, i.e., sports, or entertainment shows.
Because people can tell you the stats of their favorite team but not bills passed in CONgress.
Which is why they call network "programming" just that...
I don't think, in my humble opinion, this particular landing is a hoax.

These are REAL pictures from the surface of Mars.
This isn't faked, or staged, or anything else for that matter.

Why would NASA waste billions of dollars to justify sending any craft to Mars?
Because they are getting paid to explore (exploit) other planets...?
So we just throw money at them and they set up a stage, and take pictures?
Nah. I can't buy it. There's too many other ways to distract the people.
They certainly don't need to use Mars as an excuse.

This is one conspiracy that I just can't keep a grasp on no matter how hard I try.

and flying to Mars to see a lifeless plantet we could have looked at thru our telescopes/Hubble.....


it provides scientist with a more detailed picture of Mars. Think of it this way, during conflicts it's valuable to have people on the ground for intel. Satellites can only provide so much information. A satellite picture may show something that appears to be a weapons of mass destruction mobile unit, but a person on the ground might be able to provide information that it's actually an ice cream truck.

In the same manner, having something on the surface on Mars can clarify or disprove assumptions made using telescope/Hubble/orbiter photographs. It provides a deeper insight into the formation of our solar system and may discover evidence of past life or even currently active microbes.

Many may not see this as productive, but the problem solving required for space travel often leads to innovative products for consumer use.


How do you know Mars is lifeless? have you been there and studied soil samples?

The internets is responsible for untold numbers of highly gullible people susceptible to influence by fringe topic prevarications into going so far as to actually believe true things are false and vice versa.

You believe the Curiosity rover mission is false?
I suggest you recheck your basis for analysis.

There is no way the relief and joy on the nasa bods was faked...no way...

personally I think its a stunning achievement for humankind.


But the TV told me that DDT was safe.

They even showed kids playing in the street with it!

Strawman aside, it seems most of the coverage on this was on the internet and not tv anyway.

If not for work commitments, I had the HD live stream from NASA.gov all ready to go.