posted on Aug, 5 2012 @ 08:50 AM
link
Here is a lecture by Dr. Matt Golombek, who is a NASA/JPL geologist working on the MSL mission, talking about what makes Gale Crater (the destination of the new mars rover 'Curiosity') so interesting to science

In short Gale Crater was chosen as the landing site because of the presence of clay material, which form in a neutral (non-acidic) watery environment and the presence of sulfates, which also indicate water. In addition, there is a mountain in the middle of the crater -- dubbed "Mt. Sharp" -- that perhaps has billions of years worth of exposed strata that can be studied by Curiosity, which can help give a geological history of Mars.

For those of you strictly interested on the possibility of life on Mars, Dr. Golombek discusses his "wildest dreams" of finding signs of ancient colonies single-celled organisms (in fossils called "Stromatolites"), and (only mostly-jokingly) he talks about his even more wildest dreams of finding a fossil in the strata of Mt. Sharp.

Here's a link to the video; It's about 1 hour long. The first 37 minutes is basically about why Gale was chosen over the others. The last 22 minutes or so is about what they expect to see once they get there.

So if you don't have an hour, and just want to know about the types of science NASA is planning to do at Gale Crater, then just watch the last 22 minutes -- although the first 37 minutes is worthwhile too, if you have the time.

I must have slipped dimensions again, could have sworn the Rover was lost on entry, or could have just been a dream.

I am all excited now, and I hope it lands alright as I have been anxiously awaiting this for years!!!

The time of disclosure is indeed happening
people though that thousand of ships would be visible in the sky
an alien warning that if the government dont disclosure .. they will come

the meeting was discussing what exactly they will do
where will they drive the rover .. directly on the face of mars ?

apparently there is a big colony of reptilian on Mars
they are the one helping the mad elites
i think we will have a big show tonight .. it will be better then in 69
no one landed on the moon because they were stricktly denied to land
look at my signature from Carpenter to understand

Now the image will be REAL and FROM MARS
im quite excited for tonight .. have a good show everyone


and if nothing is there?? no reptiles no buildings just dry arid landscapes?


My predictions are 100% wrong, so to help this Mars Rover land safely I am predicting that there's no way in hell it's going to survive the landing.

but satisfaction brought it back.

I do so hope we get that satisfaction.

Originally posted by choos
reply to post by Ben81


and if nothing is there?? no reptiles no buildings just dry arid landscapes?

its only speculation until we see for ourself TONIGHT
for the first time in human history.. a very modern robots with AI will land on Mars
and its happening 5 months before the 21 december
it will land on Mars and show to the world info they have been hidding for decades
maybe also hidding the fact that they already knew and just discovered at the same time has everyone else
watching the rover landing

Meh. I'm more interested in the real scientific value of Gale Crater than I am any wild speculation about there being buildings on Mars. 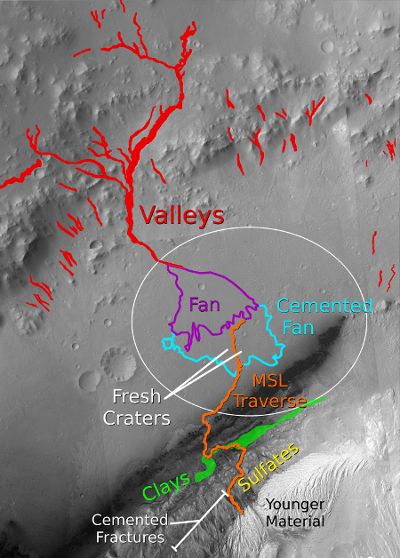 Gale Crater show signs of clay materials being present. Clays are only known to form in neutral water. This image shows signs of sediments being deposited symmetrically on either side of fractures in the highlands of the mountain in Gal Crater. That material in the highlands seems to have been deposited by water, which (along with the clay) could indicate that Gale Crater was once a deep fresh water lake.

Cemented fractures and symmetrical deposits:
photojournal.jpl.nasa.gov...
(and yes -- I see the straight-line fractures, but fractures like this are common in nature, and don't mean "alien-made")

Also, the alluvial fans on the edge of the landing site seem incredibly interesting. These alluvial fans could have been deposited by water, and those deposited materials are worth looking at.