Gun is good, it killeth and purifieth the earth.

posted on Aug, 3 2012 @ 02:36 PM
link
A Kill Zone is an very old, long term military tactic for ambush. It is used when there is to many of them and to few of you. An area is set apart. To weaken, cause confusion, dissolution, control information, control communication, restrict money, create poverty for control, restrict travel, close off any means to hide, use bio-weapons also for such after later sweeps, and to disarm. It is a snare with no means of escape. You take it down at the very weakest point. The above takes time. Just note how long it takes to pick up all weapons door to door and resistance. Best done by foreign troops today and one could use a black out of communication or a false cover and philological war. I would expect about 50% of gun pickup with no problem. But keep in mind people can be cleaver.

To take it down on large scale you would not use a race issue. As noted in the King riots it only covered limited areas. The best would be a legal act that would be seen as an extreme injustice. The object would be to turn victim against victim, bring out hidden weapons and use up limited ammo. As the police and military smartly let all burn they stay back a week before action. All this limits casualties and the troops used are fresh well armed following a plan. Take kids to local domes to be "safe", close off escape (ASAP) before it. Always after food becomes a weapon of control of the public with the victors eat and flaunt wealth showing their pride or victory over the worthless eaters. It shows who is in authority and a philological weapon. The same as under public law 102-14.

As I understand it two legal acts are coming. The second one after it is this one the pale horse Rev.6:8.

The food symbolism you present is so true it's sickening. I advise everyone who has a full belly to begin starving yourselves, as to get acclimated to this hopey 'change', while you cling to your guns and religion. You wouldn't believe just how few calories, per day, you can get by on. It changes everything.
edit on 3-8-2012 by davidmann because: (no reason given)


The plan rahm has in mind is annual tax collections per gun. This will cause the 50% to turn against the other. They will be offered incentives to suit up and conduct the searches. It's a perfect plan, from a shamelessly naked predator of Liberty cloaked as a city mayor.


Yes...and as was done in other countries, it can easily be done here in sections without the rest of the country even learning what happened. See the "Panama Deception" documentary. Our military wiped out poor towns, killed lots of people and was able to hide almost everything from the surrounding neighborhoods. I was like wow, they have been practicing these techniques and perfecting them for decades. The drones, I see as houses mysteriously blowing up without explanation.... and people would just get over it (trusting what the news says) not realizing an execution may have just taken place (no trial or jury). Maybe people are just giving up and blowing themselves up, who knows. A mystery that seem to be on the rise... We really do tend to lean towards believing that all these things are "accidents".

Authorities do not yet know the cause of the explosion. Homes in the area do not use natural gas, and Gaddy said the blast sounded too big to have come from a propane tank. Read more: www.foxnews.com...

What you have written is babble. Please try again.


It is actually a quote from an obscure movie with Sean Connery.
Look it up Zardoz.

Zardoz was a real wild movie a must see for its time. **Thanks** for the comments that included the movie to see Panama Deception as this has a history of military practice. The comment of putting a IRS tax on weapons is also very likely. They also could use a green agenda to sweep homes for food and bomb shelters with it. With events like this weapon confiscation without major incident would be about 50%. The rest would be hidden or otherwise. They also may even offer economic incentives but most likely rewards for turning their Marks in. Like filing a weapon transfer paper with fake numbers from another seller Mark. The man just bought a thermonuclear device.

I would like to ask how long it took from start to finish in Australia to confiscate their weapons?

Originally posted by subject1145
reply to post by yampa


It is actually a quote from an obscure movie with Sean Connery.
Look it up Zardoz.

ah, I tried to look it up originally and got nothing. I remember that movie. Hott: 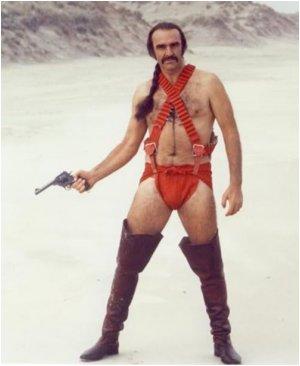 I'd like to see an agent of the government wrestle sean connery's piece from him
edit on 3-8-2012 by yampa because: (no reason given)