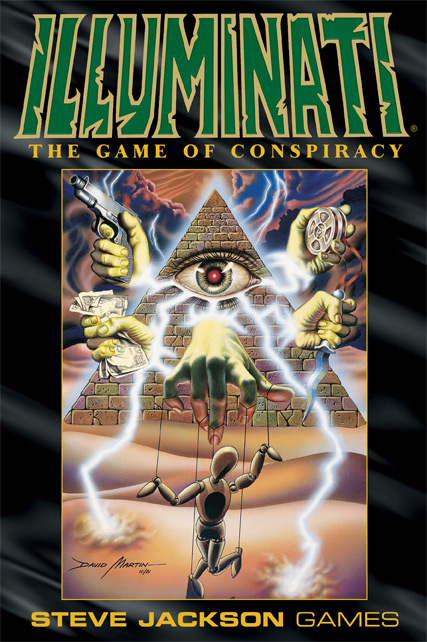 In 1995 games designer Steve Jackson created a role-playing card game called Illuminati: The Game of Conspiracy. When playing, you take on the role of the shadowy puppet masters who supposedly make up the ruling elite of the Illuminati. Your mission is to launch black-ops false flag attacks on your own people, and generally conspire to act out evil plans to elevate your own wealth and, more importantly, to strengthen your ironfisted grip on world domination

Speaking on Steve Jackson, Blankenship says: “Steve is a huge fan of conspiracy theories. Not that he believes in them—as far as I could tell in five years of working with him—rather, he is immensely entertained by them. As for the "predictions" from the cards, it's pretty much like any psychic—say that a Middle Eastern leader will be killed next year and you have a decent chance of getting it right.”

I got in touch with Dan Smith, the main card illustrator, who told me, “Unknown to most, and I say this with a degree of apprehension, speaking out now that the events are in the past, Steve dabbled in reprehensible, unclean practices to obtain his card ideas. I wouldn't say a Golden Dawn level of occult mastery, but there were times I would get messages from people who I didn't know... Steve often kidded that he was Nostradamus' second cousin's grand-nephew. Now I wonder...”

“The Twin Towers card is actually titled Terrorist Nuke, which I recall from that time was a concern relating to the collapse of the Soviet Union,” says Grigni. “Terrorism was heating up as a 'headline seller' without the ever-present threat of nuclear annihilation, but we were still looking at Hamas and Palestine as likely culprits for such acts. Art direction-wise, frankly a nuke wouldn't just blow up one building, even a 'tactical' nuke would do damage on a much larger scale. It does seem oddly prescient, given the 'twin towers’ shown.” 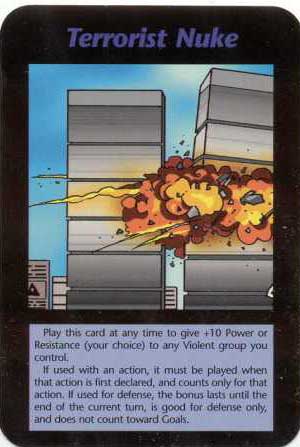 Now I don't really believe in the cards at all. I think most ATS members could have came up with the exact type of situations depicted. All you need is basic understanding of how the Illuminati conspiracy works and false flag events. It's not like a building has never been bombed before.

I just thought I'd pass this article on.

posted on Aug, 3 2012 @ 05:24 AM
link
The artists of that card game seem to have done a bangup job. I wonder how much more accurate the game could have been if it was an ATS collaboration.

Now I don't really believe in the cards at all. I think most ATS members could have came up with the exact type of situations depicted. All you need is basic understanding of how the Illuminati conspiracy works and false flag events. It's not like a building has never been bombed before.


A Mathematician will have a different way of looking at this, eventually the probability gives the game away

posted on Aug, 3 2012 @ 06:02 AM
link
steve jacksons' company got raided by the secret service in 1990.
something to do with another guy in the company who was targeted for hacking.
and 5 years later he creates the illuminati card game.


Interestingly enough, a close friend of mine has the card game. Ordered it online, as even most alternative stores do not sell it.

I believe i saw a vid on youtube that this card game has a little more to do with some future trends rather than past.

I'll do some digging and come back with info


Found the card about the Olympics.

literally hundreds of results...anyway be back later 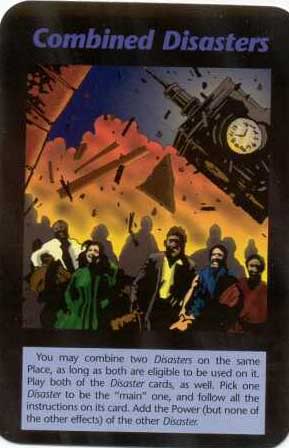 okay if you haven't read or heard so yet, the rings of the Olympics are the same exact colors represented on the shirts of the people running from the fire.

....and look, whats that in the background toppling over?

May just be speculation, but either way...just plain creepy imo

Can't tell which is the bigger hand on the clock though...


The colors are not an EXACT match, and I think the clock tower has been shown to be Ginza, located in Tokyo.


Yeah, people only look for tha matches and ignore all the rest. The majority of the cards do not line up or could be interpreted for a broad match. Like the gunman card being attributed to james holes, tech shooting, columbine, for hood, brevik on and on and on.


Well in any aspect, most predictions about anything aren't exactly dead on, such as 13th Zodiac's post about the shooting. Wasn't dead on, but he did call it imo. May just be an extremely odd card game. Then again, who really knows for sure.

Originally posted by EvilSadamClone
I remember playing that game a long time ago, long before I even knew of this site. It was a good game.

It was a very entertaining game, as the people took it for exactly what it was meant to be - a spoof of the whole Illuminati and conspiracy idea. I still have some of the cards taking up space in a box of my old Magic cards from around that time frame.

Steve Jackson created this game (and others) as spoofs, and he never really did hide that fact. I did play testing for both Magic and the original Jihad card game, and some of the guys that I did testing with were also mildly involved in pre-production work on this game. Even through development, everything was tongue in cheek, laugh at the game, and feel free to make things up as you go to help things along. There's always a serious part of the business side of a card game, but from what I could see, the development of this game was nothing but entertainment for all