posted on Aug, 3 2012 @ 05:05 AM
link
Liberals: If you don't like what Dan Cathy had to say about same-sex marriage, don't eat at Chic-fil-A! If a guy chooses to spend his money in a way that offends you well tough titty. Some people have opinions that, shocker of all shockers, are different from yours. Don't be so ignorant.

Tell your friends why you're not going to eat there and leave it at that. Maybe you could even promote a similar company that is LBGT friendly. You could, gosh I don't know, do something positive and productive instead making an ass of yourself in front of a place that sells chicken sandwiches.

Conservatives: You see a bunch of liberals protesting and your first thought is to buy a chicken sandwich?! To buy multiple chicken sandwiches?! Because, volunteering at a soup kitchen or homeless shelter would make it seem as if you have your priorities straight, right? You just throw fuel on the interminable fire of stupidity that is the Chic-fil-A controversy when you have your "buycotts".


You know who suffers the most in this? The employees of Chic-fil-A. Every last one of them. Whether they agree with Dan Cathy or not they have to put up will all of this bs and go to work and smile and make chicken sandwich after chicken sandwich and listen to the idiots caterwauling on both sides of the restaurant.

This whole situation is beyond absurd. There are far more pressing issues at hand and my fellow Americans have lost all sight of that. These are sad times.

This whole situation is beyond absurd. There are far more pressing issues at hand and my fellow Americans have lost all sight of that. These are sad times.


The word Chic-fil-a caught my eye, and I thought to myself, 'damn, another chic-fil-a thread?'. Then I read the rest of the title and was instantly pleased.

This is absurd...
There are more important issues at hand...
This type of thing should be naturally settled on its own if people are tolerant.
These people that get all up in arms about this sort of thing, show little respect for other peoples liberties.
Times are sad... yes indeed. 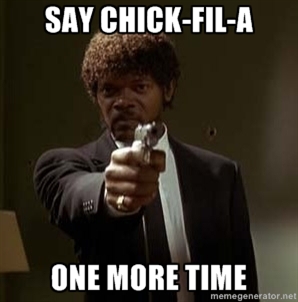 As always, with an over the top media fixation on a meaningless subject, watch what is going on on page four and five right now.
edit on 8/3/12 by soulshn because: (no reason given)


Oh cmon!!
So the world is falling down around us and state sponsored murders are going through the roof.
Big deal if the PTB wants to distract us with a chicken sandwich.
/sarcasm.
I say let the chicken die in the road, I don't eat fast crap anyway.
It's all garbage folks.

posted on Aug, 3 2012 @ 07:29 PM
link
It is kind of a weird situation here. I'm friends with a couple that franchise one of these and they have a lot of gay friends including me. They are kinda caught in the middle of crossfire in a war they did not want. I won't eat there not because of some mission but, because I don't eat any fast food.

There are more pressing issues for sure than this.
edit on 3/8/12 by toochaos4u because: (no reason given)

Me, I say, so frolicking what?

It's only a big deal if people want it to.

The problem is too many people want it to be a big deal when it really isn't.

It shouldn't really matter what another person believes. As long as they aren't selling your pet dogs to Koreans, I don't see the big deal. Let people live the way they want to live, and leave them alone.