"I, pet goat II" Animation About Events In The Last Decade

A story about the fire at the heart of suffering. Bringing together dancers, musicians, visual artists and 3d animators, the film takes a critical look at the events of the past decade that have shaped our world. 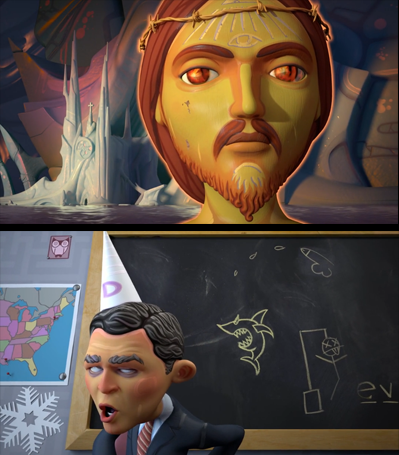 Unfortunately, video is not on Youtube so I can't embed so....
[UPDATE: FOUND, POSTED BELOW BY FortAnthem, THANKS! ]

Here's the link - www.heliofant.com Probably NSFW for Most!

I personally am going to be re-watching this a few times (figure if you're gonna get washed better scrub good).

(mods, didn't know if this would be the appropriate forum or not, please don't belt me)

I'll have to check it out tomorrow at work. My home internet is painfully slow.


What the hell, I searched high and low for this I would have thought "I, pet goat II" as a search term would have worked

But thanks a bunch for posting that! Kudos to you!

posted on Jun, 29 2012 @ 12:47 AM
link
Lighterside
I loved this video and the animation was very well done..
I think the video is open to your own interpretation there was also allot of symbolism that shows how evil our government is ..Thanks for posting this very interesting subject..peace,sugarcookie1 S&F

Reminds me a lot of this guy... 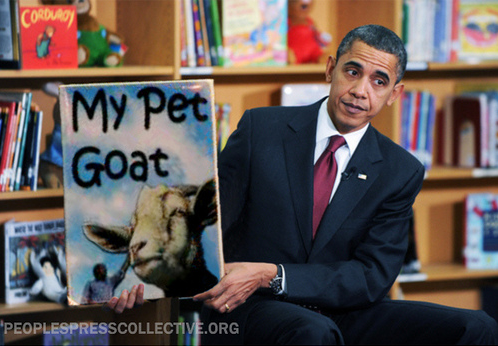 posted on Jun, 29 2012 @ 01:05 AM
link
This video will definitely give me lots to look forward to, as I am fully aware that those I will show this too will not be able to understand the massive amount of relevant symbolism. This is the most artistically show work (with relevant symbolism) that I have seen for a VERY long time, thank you very much for bringing this to ATS, and I hope that it gets the attention that it deserves.


Wow! Simply amazing! Their website gives their own descriptions of what each character represents and I'm all for it. Thanks for bringing this to our attention.

Originally posted by conspiracy88
reply to post by Lighterside


Their website gives their own descriptions of what each character represents and I'm all for it.

Thanks for that, it makes the vid just a little bit less confusing.

Pretty cool vid. You can read a lot into it and it makes you think about the situation of the world we live in today.

posted on Jun, 29 2012 @ 04:33 PM
link
something about that vid gave me an uneasy feeling, just felt weird watching it, the symbolism alone was eerie to me, all should see all ties together so well.

posted on Jul, 2 2012 @ 12:24 PM
link
I wanted to give this a bump. This video in my honest opinion is very important, and just the symbolism alone is worth it. Its great to see that art forms such as this still exist.

It is quite incredible. There are so many aspects of this video that could be discussed!

The part where the apple falls from the girl's hands, it rolls and comes to the foot of Obama. There is a coin below his foot, and the apple comes to rest forming a "007". Does it indicate he is not who he says he is; or, does the apple roll onto an "incomplete" depiction of "01", meaning 2001 (9/11). The job was half-assed, as one plane was taken down by the supposed passengers. I also do not think the entire scenario of 9/11 was fulfilled as they wished it to be.

I do not agree with the website's (creators') interpretations and names depicting the characters.

The true puppet was revealed with Bush, and the transformation of that puppet is quite obvious to us all now, Obama is simply Bush refashioned. I swear the school teacher looked more like Oprah!

Interesting that the clock is now at Midnight, as the true time Bush was in that classroom was more like 8:13 am. Obviously the classroom is teaching Evolution via "Hangman", a very precarious notion to carry about life I would say (personal opinion). I didn't catch all the points on the map behind Bush.

Obviously the entire scene takes place in a "Body", as if we are all collectively that body. Within us lies the Truth. The dancing masked individuals with the star upon their chests represent the "new religion" that will come from this journey. I note the masks change from idolotry to idolotry, perhaps representing the primitive religions of our world. The dead muslim child, and then the destruction of the mosque, eventually depicting the rising of that child (Islam) into something new.

The body with the erect penis is quite artistic. The tower (penis) is the prison of the old "whore", who seems comforted by her situation and is frightened by the coming "flame", which I see as the Holy Spirit of Christ; she is ultimately changed as her menstruation is cleared; was she washed of her sins?

The entire process depicts Christ upon the boat of Anubis, obviously depicting the passage across Hell. Personally, in my own understanding of Heaven and Hell, we reside in the 1st Heaven called Earth, beyond this world on a Spiritual plane resides Hell, it is all around us. Hell is the 2nd Heaven. Beyond Hell is where GOD resides, the 3rd Heaven above, beyond the Abyss. It is no wonder we never made it to Heaven until Christ made that journey himself, there and back again; however, this video only depicts the journey there.

The "Juan Pepito" character is not Mexican, not in my opinion. The website would have us think this represents a labor force that is suddenly finding itself consumed or something. I seriously see the sickle and hammer as representing Communism/socialism. It is drowning upon itself there is no question to that one. It could be that the socialist agenda is in the "stomach" of the journey (the journey being the body), and is being consumed by us!

Odd that money is not depicted here as that is the driving force of them all; maybe that is what the "coin" was, but seriously I see the coin more as the means to "pay passage across hell", as that was a known meme at one time in our past, and may still be! I know the old devil would prefer souls, but the men under the devil want money and power, but this video avoids that and only shows the destruction around us, the loss of the Church and the various religions, the loss of our freedom from the start. In the end we are freed from the connection of Satan and Religion, a new man perhaps will come of this.

Earlier in the video, along with Obama, the graffiti says "JZ" or "Jay-Z", which from my understanding is one artist of many amongst us that has embraced the occult nefarious ways for wealth. The graffiti outside of the compound refers to Psalms 23, "Yea though I walk through the valley of death..."

The possessed child with the gun, that was all too criminal that there would be children who are so demonic that they are lost and find themselves as soldiers (this is obviously African by its depiction). It is quite common to see children in places like Somalia and Ethiopia with weapons of war in their hands. These children are lost by their captivity of hatred and subsequent abusive world, sick world really!

OK, well, I best close on my thoughts. Wow, what a video! No matter how much we want to keep the NWO, or "One World" from coming, there is not much we can do otherwise as it is already here amongst us. We are "plugged" into the Genie, the Gjinn of our Media Circus called Entertainment! Eventually it will be one world, and one religion!

I feel sorry for those who have sold themselves, I really do; we have been given the Holy Ghost, that "breath of fire" so that we can overcome it all!

Pretty awesome; surpisingly this video does not appeal to Christian-minded folk, yet I am quite comforted by it myself..

posted on Jul, 5 2012 @ 10:50 AM
link
I also want to note that this video seems to be saying to our current "occupy" movement (depicted as the girl with the white flag against the battle tanks) is a "dead-end" path. She is stopped by death himself, who is depicted as a twisted character, and suddenly she is "changed".

She gave up! She realized that her attempt at stopping such a maddening thing is not going to happen and will ultimately crush her; she gives in.

I feel this same way about those who are trying so desperately at "getting back" what was once lost, or overcoming the abusive forces which have changed the world; ultimately, I think the movements of today are crying out for "restitution" or "the restoring of what once was".

Impossible, it really is, I think protests and voting, rallys and cries are fruitless at this point! We have to let this implode on itself as we instead embrace the Holy Ghost. Simply by accepting that he crossed the Abyss, to GOD, that he paves the way for us by the fire that resides within him.

I have already accepted the Holy Ghost. I have not accepted Scripture as used by man. I am not a "Bible Christian" but rather I am a "Holy Ghost Christian". Most bible christians see the bible as the Living Word, which it can be used in such a way, but that they suddenly perceive the book as being the "source". They worship the bible as if it were alive, much like those in Isalm feel the Koran is the embodiment. This is why they get so "freaked" by anyone destroying the book. Funny how they don't seem to realize that it is of the hands of man that we have this book, even if it was Divinely inspired, it is a book of what took place in the past and we are simply just repeating ourselves!

I do feel one part of that book is "Truth" and that is the last chapter. We are in Revelation right now as we speak, we are the last chapter of this book, manifest by our own ability to be "Divinely Inspired".

Sorry, got on a soap-box there!


Originally posted by SibylofErythrae
Don't know if it is a mood, but I am quite entranced with this bit of advertizing today.

Understandably so, I'm not sure, entirely, what they are trying to say, and sadly none of the comments make their point any clearer. Advertising? But what? Waking up? Can such a thing be advertised?

In a strangely tangental way, it kind of reminded me of this...

Advertizing their skillz in 3D visual rendering and interesting imagery with appropriate music composition. It is supposed to be a symbolic look at the defining activities of the last decade.

Twin Towers, elections, school children as pawns, bin Laden, market crashing, workers being drowned in debt, people being innudated with news while being watched for their reaction, pirates in Somalia and children soldiers, the occupy movement. Personification of events - I could almost say I knew the people in it except the female Somalian pirate.

I liked Alice as Eve, sitting with school children as chess pieces. Nodding off to sleep and dropping the apple of knowledge. The music and the stage lighting effect for the sequence showed off their skills. The picture of the lotus would make for a good wallpaper for my laptop.

Notice the ring on the puppet master's hand in the opening scene.