A team of Spanish scientists says it's demolished the main evidence that dinosaurs were cold-blooded.

For a long time, scientists assumed that they were coldblooded, or ectothermic, because certain features of their bones known as lines of arrested growth (LAG) were also found in cold-blooded creatures today.

However, it seems that they hadn't done their homework. In a new study of the bones of around a hundred ruminants, a Catalan team of scientists say they've discovered that warm-blooded creatures have them too.

LAGs are seen in bone sections as dark rings, similar to those of tree trunks. The rings are formed - both in animals and in trees - when poor seasonal conditions inhibit the organisms growth.


I'm not much into the argument over creation/evolution but that this was the correct forum to place this. I've always suspected that some were warm blooded.

When I was a kid Dinos were Grey, Big, Slow and Dumb. Now they are fast [some of them anyway] colorful, still others had feathers and now some possibly warm blooded.

I wonder what they'll say they were next?

posted on Jun, 28 2012 @ 08:32 PM
link
While I'm no expert in these matters, I would venture a guess that there were warm-blooded and cold-blooded dinosaurs. It just seems to make sense that they were as diverse as the animal kingdom is today.
edit on 28-6-2012 by isyeye because: (no reason given)

posted on Jun, 28 2012 @ 08:56 PM
link
For information on warm-blooded dinosaurs, Robert Bakker is a good person to start with.

There are also some interesting talks on Tedx, such as this one which, while not immediately associated with the OP, is in some way related and just damned interesting.


I always felt they had a much larger diversity than the books told us.
Just like the wide variety of species alive today
edit on 28-6-2012 by SLAYER69 because: (no reason given)


When I was a kid Dinos were Grey, Big, Slow and Dumb. Now they are fast [some of them anyway] colorful, still others had feathers and now some possibly warm blooded.

I wonder what they'll say they were next?

But scientists do speculate that “advanced dinosaurs” are inhabiting other planets.

These dinosaurs are said to be monstrous creatures with human intellect and cunning–like what would happen to the Earth’s dinos if an asteroid hadn’t obliterated them eons ago. Noted scientist Ronald Breslow came up with this conclusion through his study of DNA and RNA on Earth. Most DNA on Earth, except for D-sugars and bacteria, are oriented to the left.

Smart Dinosaurs May Be Inhabiting Other Planets


Could explain some of the "Grey" aliens....

Another topic for another thread....

Originally posted by LadySkadi
What's your tie to origins and creationism?

I did a search on this particular title and all the related topics that came up were in this forum so I just posted it here.


Heres a video on the debate.

A scientist looks at the notion that dinosaurs may have been warm blooded, and if so, the potential that they may have survived the ice age of 2 million years ago. Great video from BBC show Horizon - My Pet Dinosaur.

Since the 1980s researchers have been saying that nearly ALL Dinosaurs were warm blooded.

That is where the Dinosaur/Bird references come from...Birds are NOT cold blooded.

They've been saying for 30 years that dinosaur bones are structured similar to birds.

Jurasic Park the Movie, anyone?? The Bird reference from the 1990s.!!

posted on Jun, 28 2012 @ 09:26 PM
link
I've heard for a good many years there has been speculation about some Dinosaurs, that they were indeed warm blooded, social and group orientated. Like pack animals. They used strategies to catch prey like many modern wild animals.

Also that some are distantly related to birds, which makes perfect sense to me. If you ever watch crows hopping about, eying you like you're of particular interest as they scour a bin for scraps, or how they talk to each others, I can imaging large predecessors of these intelligent creatures acting much the same.

I also think that a number of marine animals are also descended from a common ancestor to both bird and extinct dinosaur; some have beaks, use the earths magnetic field to navigate, are intelligent beyond our comprehension..

Birds use plumage to attract mates. Look at the cuttlefish. As bizarre a creature that can flutter florescent colours at will; octopus can disappear into the coral..

Cold blooded reptiles of today may simply be a small percent of the example of creatures that existed back then. Crocodiles have barely changed in millions of years. Solitary, not needing the help of others. Seems logical that such a machine built for survival would indeed survive, while creatures that hunted in packs would die out, in the event of a catastrophic global event.

And just as mammals of the time were small and rodent like, if you believe so which I do, bird life would have been able to survive requiring less food, less warmth, and out live any larger creatures, which would require much more food, much more shelter and much more warmth.

When I was a kid, dinosaurs were exactly as you imagines.. land of the lost slow, dumb and instinctive...

But it didn't take jurassic park to make me think differently, I had pondered this long before when they first realised that the bone formation of some larger dinosaurs had the hallmarks of creatures that were built for speed. Laying eggs, fast, able to hunt in packs, far more intelligent than we gave them credit for..

Birds to me are mini representations of what they may have been like, and I don't mean budgies lol.

This just astounds me, these creatures. I had to add this after thinking about the cuttlefish and octopus and how amazing they are. Not really on topic I guess, but still... if we don't even know what sort of world we live in right now, we certainly have to cater for error in theory about how things were millions of years ago!!

posted on Jun, 28 2012 @ 09:27 PM
link
I got into an argument on a geology forum about this recently. I thought it had been proven they were warm blooded. But some still cling to those old notions. Dinosaurs were birds. Big flightless toothy birds. The bones make it obvious. Hollow bones, light skulls, bipedal, had feathers, they were birds. Birds are warm blooded. In fact, it was recently learned that modern birds are merely dinosaurs that never matured. They stayed juvenile instead of growing up.

Thanks for the video.
Checking it out now. 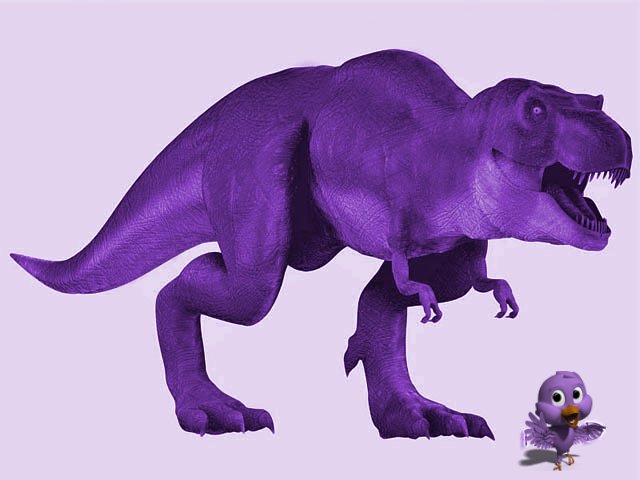 posted on Jun, 28 2012 @ 10:29 PM
link
Being warm blooded might be what made some of the dinosaurs survive the Triassic extinction.

Triassic oxygen levels spiked, leading to an increase in life-forms. Then oxygen levels dropped, during a time of extinction leaving the remaining dinosaurs a hegemony on the planet until the KT event.

During the Megafauna era, only 100,000 years or so ago, there were GIANT flightless birds.
15 foot tall Ostrich types etc etc.
Even now were have 8 foot Ostriches, 6 foot + Emus, 5 foot Cassowarys etc.

I still believe Dinosaurs images are misrepresented.
Skin, fur etc has not survived in fossils, but some feathers have.
There is NO reason to believe that Dinosaurs were not just Naked skin things, but ACTUALLY could have been covered with fur, or maybe decorative plumes of feathers or skin stuff (eg chickens/roosters head things)
They may have been brightly coloured to attract mates (like birds) or have camoflage fur, like tigers etc.

I dont believe they use to Roar (like an Elephant or Lion) as portrayed in the movies.

As there are a myriad of bird sounds, i believe they may have chirped, hissed, deep guttural moans etc that would have been heard in the jungles and plains of the time. Hollywood has distorted people's thoughts...thru ignorance.

Many people show fascination on how these large predators had such tiny arms but huge legs and tails....Why???

Look at the Mammal/Marsupial Kangaroo today...it has Small arms and Large legs and very strong tail....and furry.
A Giant kangaroo of the megafauna era stood over 10 feet tall!!
Who says all the Dinosaurs ran??
Maybe some Hopped, Jumped etc to travel faster than running.
Eg, Kangaroos, some Mice, some birds etc etc.

Too much of a closed mind with these so called "experts".

The only positive, is they HAVENT got a clue.....Until we invent that time machine, wild theories are probably closer to the truth, than what they Think they know and call it science.

Originally posted by SLAYER69
reply to post by PurpleChiten

Originally posted by gort51
The only positive, is they HAVENT got a clue.....Until we invent that time machine, wild theories are probably closer to the truth, than what they Think they know and call it science.

that's how I got my pic... I have a time machine and have been using it in the election thread

The only positive, is they HAVENT got a clue.....Until we invent that time machine, wild theories are probably closer to the truth, than what they Think they know and call it science.

What? "Wild theories are probably closer to the truth"? You do realise that all of the dino assumptions are evidence-based, don't you? And the fact that we change our understanding of dinos in light of new evidence is a good thing, right? "Wild theories" are useless unless they are rooted in hard evidence. To suggest that such baseless speculation is more informative than science is ludicrous.