Law allowing Border Patrol to do their job moves through House

posted on Jun, 27 2012 @ 08:18 AM
link
This is a classic example of creating legislation to counter the effects of other legislation that is restricted by different legislation.

Sounds confusing but it's true.

It seems that Border Patrol agents have a dilemma that takes hours if not days if not forever to overcome when simply trying to do what one laws they should do and another laws they can not do.

Sounds like a Gordian Knot that has laces from both shoes tied together at the same time.

Border Patrol agents must abandon their vehicles to chase illegal immigrants, drug smugglers and potential terrorists who illegally cross into the United States and onto federal lands that are designated as environmentally sensitive areas.

Legislation passed by the House last week to slash environmental red tape would allow law enforcement to “do the job they are paid to do,” said Rep. Rob Bishop (R-Utah), who authored the language.

The measure was part of a package of conservation and jobs legislation that passed the House 232 to 188 on a mostly party-line vote.


The EPA seems to be the "culprit"


“When it comes to the Environmental Protection Agency, the American public is well aware of the ability of this federal agency to slow our economy with debilitating regulations,” said Rep. Doc Hastings (R-Wash.), chairman of the House Resources Committee. “When it comes to our federal lands, which are predominately located in Western states, there is plenty of bureaucracy and red tape to go around.

“It doesn’t have to take federal spending or taxpayer money to solve these problems. It simply takes Congress making common sense changes in laws and regulations to restore reasonableness, transparency, accountability and sometimes sanity, to the actions of the federal government,” Hastings said.


Democrats suggested that Republicans were more interested in rounding up illegal border crossers than they are in protecting the environment. “The border is the excuse, the target is the environment,” said Rep. Raul Grijalva (D-Ariz.).

Rep. Ed Markey (D-Mass.) called the measure a “dangerous overreach.” “Environmental laws are not the problem when it comes to guarding the border,” Markey said.

Bishop’s language gives the Homeland Security Department authority to waive more than a half-dozen environmental laws on 20 million acres of federal land along the southern and northern borders.

Numerous federal classifications including wilderness areas and habitats for endangered species act as an environmental gate, prohibiting the use of motorized vehicles to patrol or apprehend criminals except in emergency situations. As a result, Bishop says, the property becomes a highway for criminals to avoid detection ....


Ironically, the smugglers and illegal immigrants are trashing the environmentally sensitive areas and putting the species at further risk, say supporters of the measure


The article goes on to describe some of the endangered species that live in the "zones".

The article also points out how the "Environment" is getting damaged by "Illegal" forces anyway !!

Republicans say let the Border Patrol enforce the laws they are responsible for.


I wonder what effects the restrictions have on "Humans" ?
Especially when even more laws get broken after the "illegal activities" enter the Cities ?

posted on Jun, 27 2012 @ 08:30 AM
link
Wow, I haven't seen any border pictures that are something other than desert. Kind of hard to believe it's a protected environmental area.

So, let me ask, is the EPA concerned about this? 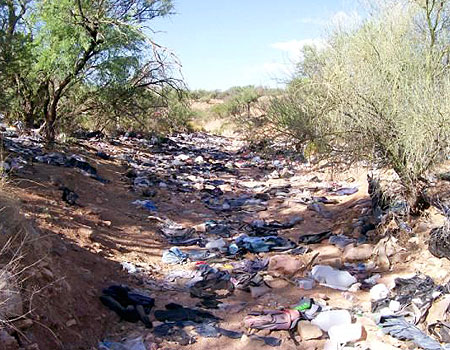