page: 1
100
<<   2  3  4 >>
log in
join
share:
Wookiep
+35 more
posted on Jun, 26 2012 @ 11:06 PM
link
I wasn't going to post this thread because I had recently posted a very big weather event just a few weeks ago which happened in my city, and I didn't want to hog all the CS crazy events news on ATS. (I did search, hmm) That thread was about a very freak, and insane hailstorm that happened that resulted in huge floods and images that I could only describe as incredible. You can view that thread HERE

I had figured by now, someone else on ATS would have reported this since I have been spending my time watching this unfold on local news and facebook reports for the last 3 days now. As it turns out, the MSM would rather talk about Mitt Romney instead of a city burning to the ground.

The Waldo Canyon wildfire started about 10 miles from Colorado Springs on Saturday at around 1pm. There have been several other wildfires in Colorado, and many people suspect they have been lit on purpose. This particular fire was declared #1 priority in the nation due to it's location and unpredictable nature. Many towns surrounding Colorado Springs have been evacuated since Sunday. The fire department, until now, has claimed to have decent control over the situation. The fire has many heads and many fronts. This afternoon one of those fronts broke 2 main fire lines and jumped into a major suburban area in Colorado Springs resulting in 32,000+ total evacuations and now dozens of houses/buildings burned.

The very best source so far concerning this fire is KKTV news 11. They have covered this fire 24x7 since the fire started, and they are the only local station that has done so. Here is their live stream:

Here's a pic of the massive apocolyptic smoke plume I took today. ( I live on the westside and this fire IS on the westside, just not as south as I am YET)

This is ALL smoke: 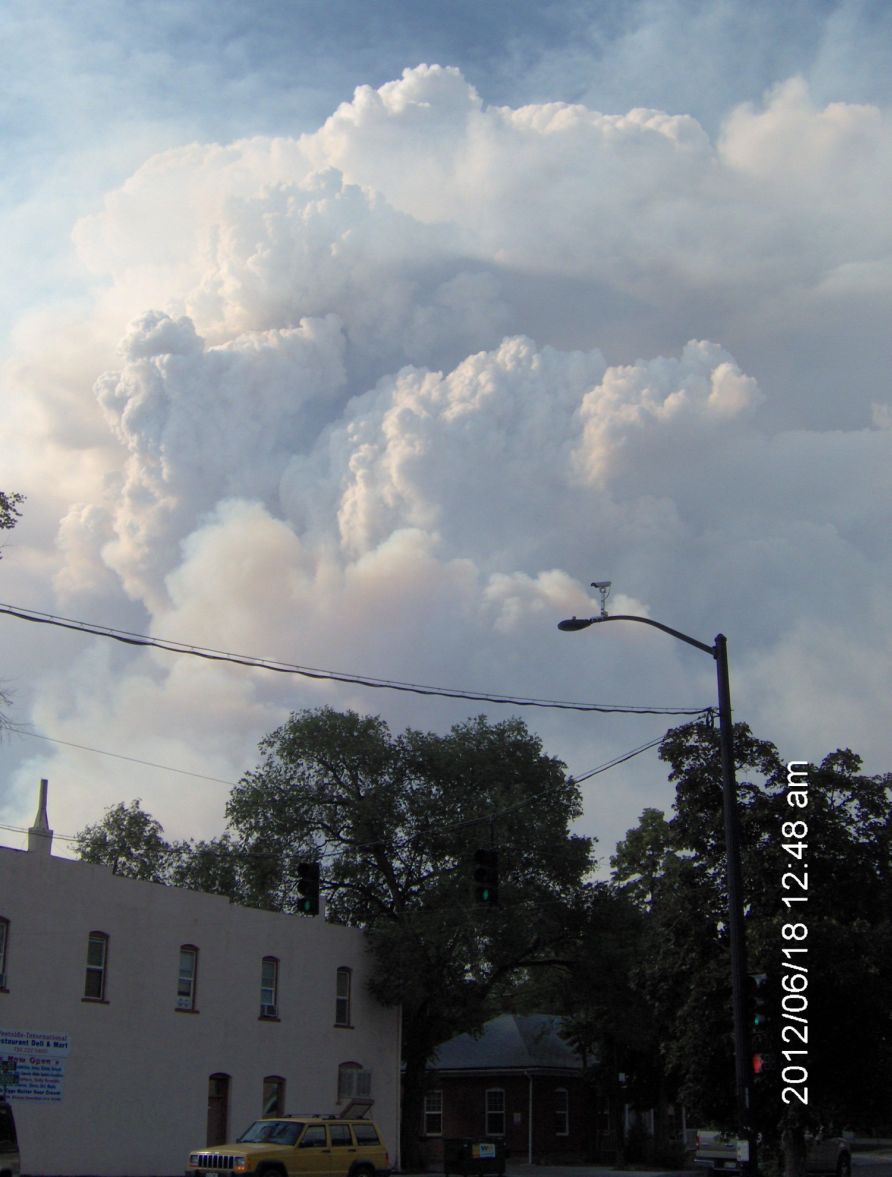 Here's a few others that were posted on Facebook and these don't really even justify the scale of this: 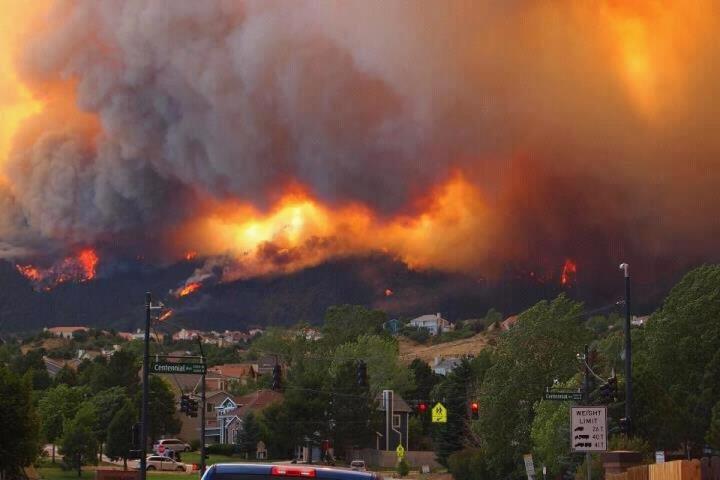 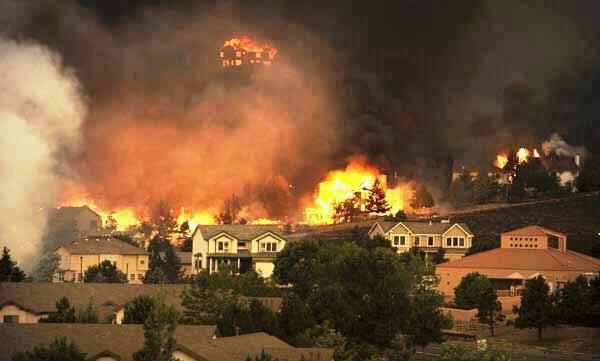 (Airforce Academy, it has been evacuated) 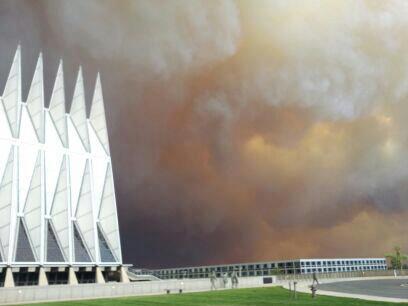 There are some wide spread shots of this fire at night tonight engulfing a large portion of this city the live news shots are showing. I have not seen those ones yet on Facebook. This is much like the Oakland fires, yet our National media doesn't seem interested. I'll try to give updates but for now I'm just making sure my area won't be under evacuation soon. Again, check out the live coverage!

posted on Jun, 26 2012 @ 11:10 PM
link
It's been crazy here lately, hasn't it? I live pretty close to the High Park fire, and I'm about sick of waking up to the taste of campfire in my mouth. I'm hoping they can get the Waldo Canyon fire out quickly, because it's much more populated down there. When I left work in Broomfield today, I was greeted by a fire to the west in Boulder. With the winds out of the south tonight, Loveland was blanketed by the Boulder smoke. Hang tough, neighbor. Let's hope this can be contained quickly!

posted on Jun, 26 2012 @ 11:12 PM
link
I live in Virginia and couldn't imagine going through something this huge, One loses everything in a fire. Your home, pictures, keepsakes, and important memories. My thoughts and prayers go out to those who have lost and will lose everything they have ever worked for. My heart hurts for them. I hope those in the line of this fire (including you) take precautions and stay as safe as you can.

So much devastation, it will take years to rebuild. I am sorry anyone has to go through these things,


Yes it has been freakin nuts! I can't believe this wasnt posted here! The MSM is ignoring it too... Anyway I hear another fire started near Boulder today, any word on that?

posted on Jun, 26 2012 @ 11:16 PM
link
Just finished talking to my brother in the Springs - it's about 2-3 miles from his house now & they're in pre-evacuation mode.
Bad news for many people up there - they're cutting power to neighborhoods around the area and trying to bring in military but according to the reps I was listening to it sounded like red tape is holding up progress.
God help everyone that has a home in that area.
I lived in the Springs for about 7 years - beautiful area, it's a shame so much of it will be scarred for the near future.
edit on 26-6-2012 by coldkidc because: (no reason given)


I have some friends that live near NCAR, and they were ordered to evacuate this evening around 6:30pm. We offered them our basement, but they're going into Denver, since that's where one of them works. I looked south from HP Hill in Loveland, and could see the smoke bellowing up still around 5:30pm this evening. Let me text my buddy in Broomfield and see what it's like there. I'll get back...

posted on Jun, 26 2012 @ 11:18 PM
link
There's a supermax prison right around there. In fact there are a number of prisons in this area. How are they going to handle the fires getting close to these places.

posted on Jun, 26 2012 @ 11:21 PM
link
Wow that's crazy! I can't say that I will pray for those in the path of these fires, because I don't believe in God, but I will say something tonight that will hopefully keep everyone safe! It looks like everything that I've ever heard or seen the apocalypse would look like!

Stay safe everyone in the path of these fires!

Originally posted by Daughter2
There's a supermax prison right around there. In fact there are a number of prisons in this area. How are they going to handle the fires getting close to these places.

Luckily, Canon City (prisons near us) is pretty far away from the fires, but with how dry it is, and how much dry lightning we are getting, that area could ignite just as easily! Of course we do have CJC, but it's on the far southeast side of town.
edit on 26-6-2012 by Wookiep because: (no reason given)


I have some friends that live near NCAR, and they were ordered to evacuate this evening around 6:30pm. We offered them our basement, but they're going into Denver, since that's where one of them works. I looked south from HP Hill in Loveland, and could see the smoke bellowing up still around 5:30pm this evening. Let me text my buddy in Broomfield and see what it's like there. I'll get back...


Kepp us informed, stay informed and stay safe. It's crazy out there!

posted on Jun, 26 2012 @ 11:24 PM
link
My coworker who lives really close to 120th and Hwy. 287 in Broomfield said the smoke isn't bad from Boulder. I'd guess that with Jeffco Airport right there, they'll get the Boulder one in order relatively quickly. He said he has his windows open and not much smoke.

posted on Jun, 26 2012 @ 11:29 PM
link
Yea, the Boulder fire started due to a thunderstorm that rolled through Boulder, and then Longmont (Where I am).

Several fires were started from lightning strikes.. (Or who knows what).

The fires are crazy, and the fact they are soooo close to massive residential areas is uncanny.

Major inconvience for those with breathing difficulties as well.

Waldo Canyon in a demonfire, the way it's moving so fast, it's scary.. I have several friends down in the Springs.. Hope they're all right.

posted on Jun, 26 2012 @ 11:29 PM
link
One thing I`ll never understand in this day and age. With all the might we have in our Military why can`t we have a National Fire task force? You know like 100 jetliners ready to soak anywhere USA. It could be called Fema Fire squad.

I also think this might not be heavy on the news due to putting the idea out there. This might have been set? I`ve often thought these terrorist are not so here due to they don`t take advantage of nature doing things like this.

Sounds like you are close to this OP. My thoughts are for your safety and them getting this thing out. Hope all goes well.

This is what they need a fleet of. 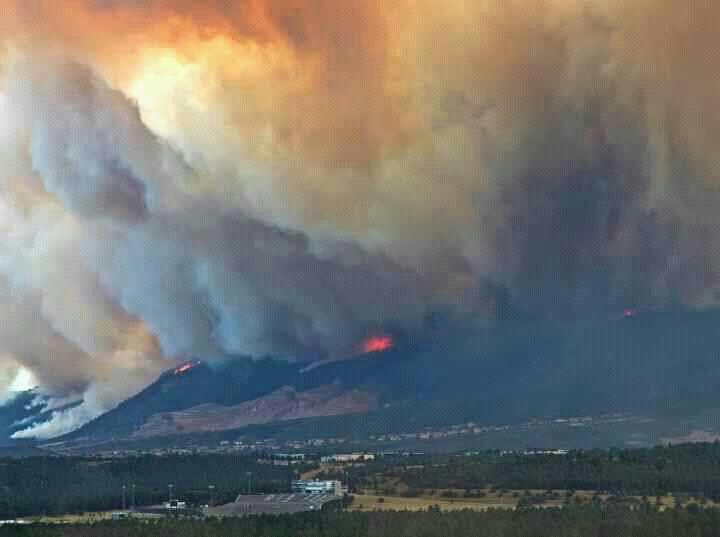 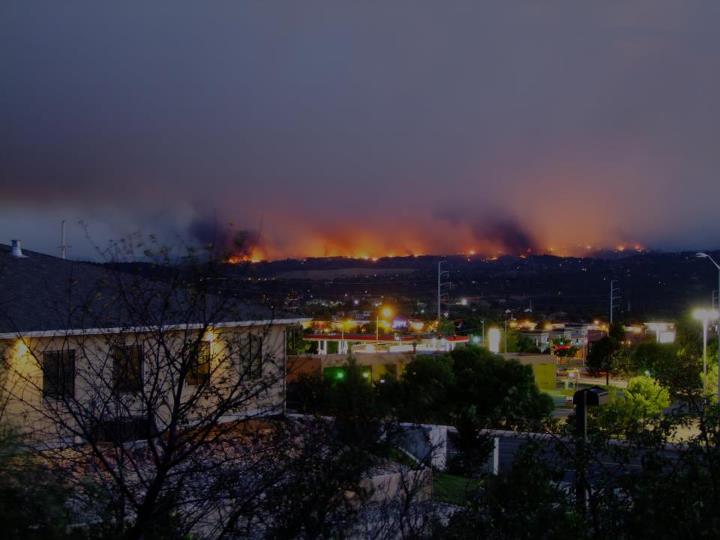 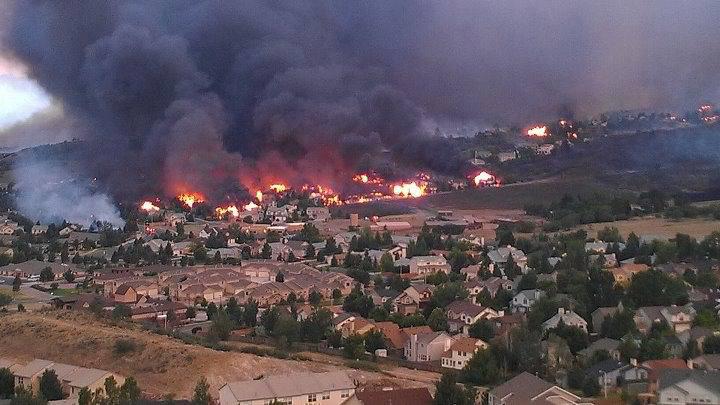 First day ever in recorded springs history that the temperature went above 100 degrees, I feel like I am in a continuous camp fire. Also I heard at work today that physical work was not advised due to the amount of smoke. I have been out a couple of nights in a row now, taking walks to look at the impending fire. Hahaha I am a bit away but the moon is red an the distance is cluttered with clumps of red glow and smokey haze above the illumination. If I can take some decent pictures, I will post them but... Well I would have to get a clear picture with a very deep zoom so I can only hope

Isn't the main Lockheed Martin manufacturing facility (where nukes and other bombs are built) in Colorado Springs?


I was at Abo's in Superior this afternoon when that thunderstorm rolled through. It rained a little bit, and we were joking around with "what's that stuff falling?". Now, I wish that storm would have never even came. I work at Oracle, and could smell smoke at one point. When I left work it was pretty bad around the old StorageTek campus area. Being in Longmont, you'll could hop onto the Diagonal and get us an update? Please? We can't see anything this far north at this time.

posted on Jun, 26 2012 @ 11:34 PM
link
You guys need to knock it off with all this trying to take up air time and all. Jeesh. JK What the heck is going on. Why is nature picking on you guys? It's hard to see my old stomping grounds being destroyed like this but more importantly I hope everyone makes it out of this safe and okay. The last picture in your post is the Air Force Academy Chapel enveloped in smoke, Is the Academy on fire too or is that blown smoke?

Please keep us informed but above all stay safe.