The ancient Temple of Dionysus found?

posted on Jun, 25 2012 @ 08:23 PM
link
I was looking for some information, to address several threads and trying to bring them to a conclusion, and found the following. I was surprised had not been presented on ATS, according to the Search Engine anyhow.

If it has previously been offered for view, my bad.

Bulgarian archaeologist claims he found the ancient Temple of Dionysus

A Bulgarian archaeologist has presented new finds from the Ancient Thracian and medieval fortress of Perperikon proving the existence of an Antiquity period sanctuary that he believes could be the ancient Temple of Dionysus.

“The marble reliefs of the Thracian Horseman that we have found during excavations there prove that there was a sanctuary at Perperikon,” Novinite.com quoted Prof. Nikolay Ovcharov as saying at a news conference. 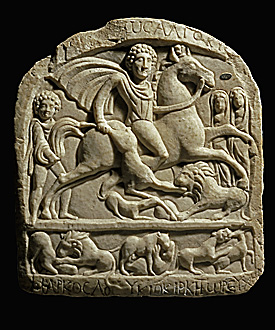 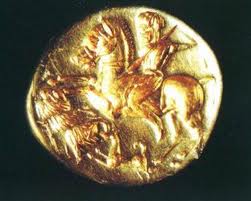 The Thracian Horseman is the conventional term for a recurring motif from the iconography of Paleo-Balkanic mythology during the Roman era, believed to have been supreme deity of Ancient Thrace; he is usually depicted on funeral statues as a horseman slaying a beast with a spear.

Ovcharov has been excavating the Ancient Thracian rock city of Perperikon in the Rhodope Mountains for the past few years, and his finds have increasingly proven that Perperikon (also known as Hyperperakion) used to be a crucial urban centre during the Middle Ages as well in the Byzantine Empire and the First and Second Bulgarian Empire, and not just in the Antiquity period.

His earlier finds also revealed that Perperikon could be a sanctuary of Ancient Greek and Ancient Thracian god Dionysus.

“We are currently excavating a very interesting object about the link between the Perperikon acropolis and the sanctuary-palace. I continue to insist that this place was of great importance,” Ovcharov stated.

“We know that in Perperikon, 7000 years ago, there was a rock sanctuary of the sun cult. We have seen these images on ceramics from the Stone-Copper Age, and then this persists throughout the Bronze Age, during which the altars were cut into the sanctuary.

“The second millennium before Christ was the most important period because this is when the entire system of rock altars, which we are now studying along the mountain range, dates back to,” he explained.

He believes that the spot in question could be one of the greatest cult sanctuaries of the Antiquity period, the long sought after Temple of Dionysus, which was also mentioned by Herodotus in his writings.

“This temple was as famous as the Temple of Apollo at Delphi. Two Roman historians also write about this temple. However, they don't mention that it was in the Rhodope Mountain. My hypothesis is that this was precisely the Temple of Dionysus,” Ovcharov claimed.

And if I am not mistaken, this would be close to an Original due to it's Thracian relationship.

The Dionysian Mysteries of mainland Greece and the Roman Empire are thought to have evolved from a more primitive initiatory cult of unknown origin (perhaps Thracian or Phrygian) which had spread throughout the Mediterranean region by the start of the Classical Greek period. Its spread was associated with the dissemination of wine, a sacrament or entheogen with which it appears always to have been closely associated (though mead may have been the original sacrament).........................

Searching the Net, I have not seen anything dating to this era being located in respects to Dionysus's Temple outside of Perperikon. There are many items found elsewhere, (Minoan Crete for example), but no Temples other than the ones of the Greek and Roman periods. (They were always stealing other peoples god's. )

Originally posted by Infi8nity
Reminds me of st george, same depiction of man riding on a horse with a spear killing a "monster"....


You're absolutely spot on..

Thracian horseman is the conventional term for a recurring motif from the iconography of Paleo-Balkanic mythology during the Roman era.

The tradition is attested from Thrace to Moesia and Scythia Minor, also known as the "Thracian Heros", at Odessos (Varna) attested by a Thracian name as Heros Karabazmos, a god of the underworld usually depicted on funeral statues as a horseman slaying a beast with a spear.[1][2][3]

Sabazios, the Thracian reflex of Indo-European Dyeus, identified with Heros Karabazmos, the "Thracian horseman". He gained a widespread importance especially after the Roman conquest. After Christianity was adopted, the symbolism of Heros continued as representations of Saint George slaying the dragon (compare Uastyrdzhi/Tetri Giorgi in the Caucasus).[2]

It has been part of the syncretism of Romanized people; Cult of Apollo[4], Christianized people; possible connections with warrior saints, e.g. Saint George[5] and Saint Demetrius[6]

Personally, I have always considered these motifs as being remnants of the cult of Alexander, however, that does probably mean that the location of the Temple was over one that had previously been dedicated to Apollo, and before that Dionysus. The syncretisation of the cult of Apollo to Alexander or the Horseman, would have given over the slaying of the Python to that new god. So yes, he is, technically slaying a dragon.

edit on 26-6-2012 by Biliverdin because: grammar and spelling

Originally posted by Infi8nity
Reminds me of st george, same depiction of man riding on a horse with a spear killing a "monster"....


Aren't a Dragon a reptile by the very definition, if going by mythological descriptions?

I am absolutely not trying to "pic", but, saying a "Reptilian Dragon?" sounds like saying "Avian Bird?", to me.

posted on Jun, 26 2012 @ 08:25 PM
link
I would like to clarify, since I was out of town and Internet was "shakey" at best. I wasn't able to add some editing comments. It was more than 4 hours before access worked again.

Both of those photos above, are examples of the "Thracian Horseman" and where NOT located at this site. I just offered them for examples.

And there are thousands of those representations all through the Mid East, and Europa. I liked the Gold Piece, (personally) and thought the Other depiction was one of the clearest.

I was seeking photos of the found reliefs on the Pillars, spoken about, but haven't seen them as of yet. Like I said, there are thousands of them.

And yes, I agree completely with the premise that this "concept", The Thracian Horseman, has been utilized and transferred according to the whims of the Dogmas of Man, and their incorporation of "Pagan" symbols for even newer pagan cults as well as the Cathotic/Christain applications. That's just a never ending list of Icons relabeled over and over again.

P.S. It's nice having a steady conx.

Recently there have been claims of bones found there in 2010 belonging to John The Baptist. Oddly enough scientists have mapped the genome but I have yet to see mtDNA and Y-DNA results but the mtDNA hints at U1a.
edit on 26-6-2012 by cry93 because: (no reason given)

Originally posted by cry93
Bulgaria sure is getting a ton of attention lately.

And I think it rightly deserves the attention it is getting.

Here's an Article from a few years ago, but it makes a point.

Nowadays Perperikon is one of the authentic ancient stone cities which impressed Herodotus, Suetonius Tranquillus and other historians many centuries ago

The ancient Thracian city of Perperikon is situated in the Holy Rhodope Mountains near the town of Kardzhali, Bulgaria. It covers an area of 12 000 meters square and is one of the largest megalith complexes at the Balkans. The city flourished during the Roman Age but the earliest traces of human activity found there are dated back to the late Neolithic Age, 6th – 5th millennium BC. The archaeological research of the site restarted in 2000 after 17 years at a standstill. The excavations are headed by Prof. Nikolai Ovcharov, known as the Bulgarian Indiana Jones.

At the Dawn of Civilization

Many centuries before the invasion of the Thracian tribes, the Rhodope Mountains were inhabited by people who laid the foundations for a sophisticated megalith culture. They worshiped the awesome scenery all around them – huge solid rocks, rising high above and touching the mighty sun. There is plenty of evidence that the site of Perperikon was one of those prehistoric sanctuaries. The archaeologists have unearthed ritual fireplaces, flint knives, effigies of unknown gods, ceramics, which have been laid in roughly whittled pits in the rock.

Perperikon – a European Machu Picchu or a Stone Pompeii

The Thracian tribes, who arrived and inhabited the Rhodope Mountains during the Bronze Age, 3rd – 2nd millennium BC, turned the primitive sanctuary at Perperikon into a gorgeous temple. Step by step, the place had been developing into a big city with a palace, houses, temples and tombs cut into the surrounding cliffs.

So far, Prof. Ovcharov and his team have unearthed approximately 10 percent of the entire ancient complex and everything that has been revealed is quite fascinating. The remarkable discoveries provoked a Dutch journalist to describe Perperikon as “the European Machu Picchu”. Surprisingly, this comparison makes the Bulgarian Indiana Jones a bit nervous.

“It is unacceptable, for Machu Picchu is just a village located high in the mountain, while Perperikon is a big city with streets, urban planning and development of Antique style. Perperikon is a unique archaeological site in Europe because it is cut into the rocks and is well conserved. So, you can see here real buildings, rooms, streets, squares… There are only a very few authentic ancient cities like Perperikon, so I would describe it as a Stone Pompeii: this comparison is the correct and precise one”, the professor commented.

And more inline with this Thread itself, comments moved towards the Temple of Dionysus......or Sabazios should we say?

Recent scientific research and the archaeological discoveries convinced some historians that the sanctuary and oracular shrine of Sabazios (the Thracian equivalent to Greek Dionysus) at Perperikon had been those ones, mentioned by Herodotus and Suetonius Tranquillus. The “Father of History” compared the Oracle of Sabazios – Dionysus to the one at Delphi: “… it is a prophetess who utters the oracles as at Delphi”.

In his book “Life of the Twelve Caesars”, Suetonius gave full description of the visit paid by the first Roman Emperor’s father at the oracular shrine: “… When Octavian, the father of Augustus, came upon the Holy Mount of Dionysus, he asked the oracle about his son, and the prophetess told him that his son was going to rule the world: for as the wine had been spilt on the altar, the smoke rose up above the top of the shrine and even to the heavens, just as had happened when Alexander the Great himself had sacrificed upon the same altar.” There were some other ancient historians, besides Herodotus and Suetonius, who had mentioned the temple and the sacred wine and fire ritual which was used to deliver prophesies.

For more than a century, historians have been searching for the legendary sanctuary and oracular shrine, because their discovery will be as important as that of Troy and Mycenae. Perhaps, archaeologists have already chanced upon it.

And maybe this is what was been discussed above. They may have found it.