In Massachusetts, you must PAY to plead NOT Guilty!

So it seems that the amount of appeals in Mass. Traffic courts has declined drastically.. Why, and who really cares you may ask..

Well they have insituted a fee to appeal traffic charges, and it seems that with less income and disposable money about, citizens are opting to only pay the ticket, regardless of whether they want to fight it, because its cheaper than paying fees to plead not guilty to a charge, and then having to go through the court process. 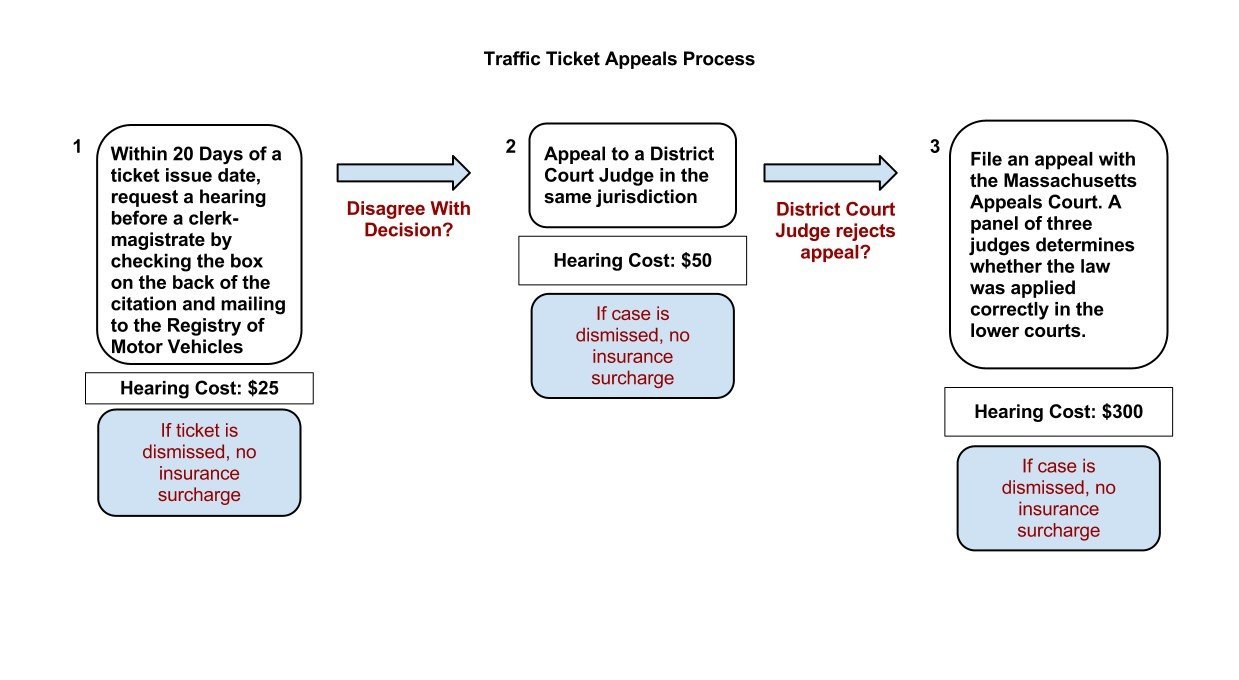 Data provided by the state Insurance Board of Appeals, which rules on traffic accident cases alone, shows that the number of drivers appealing those accidents – and the insurance surcharges that come with them – has declined by 36 percent since 2006 even though just over half of those drivers were winning their appeals. Only about 30 percent of motorists who appealed their cases were found to be more than 50 percent at fault and subject to a surcharge, the records show.

The state Registry of Motor Vehicles is seeing a similar trend in the number of traffic ticket appeals filed by motorists through the district courts.

“We are not in a position to speculate as to the reason for the decline in citation appeals,” said registry spokesperson Sara Lavoie.


The fees, which start at $25 to contest a traffic violation before a clerk-magistrate and $50 to challenge an insurance surcharge, can add up quickly. Appealing either decision through the court system can add hundreds more to the tab.

So.. IF you feel that a ticket was unjust, and you want to fight it now, you MUST pay a surcharge to exercise YOUR RIGHTS to appeal and to use the Justice system! What! This is wrong!
And it starts at $25 bucks and can rtange up to hundreds of dollars, IF the court decides to impose that on you.. that sounds fair eh?

Here is an opinion from WhatReallyHappened


By imposing a fee to plead not guilty, the courts are creating a system where it is cheaper to simply hand the fine to the government than to fight an unjust charge. This hands the police a license to write fraudulent traffic tickets with impunity.

posted on Jun, 25 2012 @ 12:21 PM
link
yes, i had to pay for a hearing last year in MA.
I believe lawyers should get involved with this.
Basicaly, you are paying for something that is your right? no?
your first proven giulty with the ticket, then you have to PAY to be heard in court. and if you win, you DONT get a refund.
its a scam.
either pay the fine, or pay the hearing fee, or BOTH!
what about the poor people who were fined?
that means they have no due process if they cant afford to pay for a hearing?

posted on Jun, 25 2012 @ 12:22 PM
link
Which if I had the power I would fight it all the way to the supreme court if necessary. This can be argued to be unconstitutional, ebcause it places people in double jeopardy.

I tend never to appeal mainly because it's more hassle than it's worth .. generally speaking you don't win very often unless you have a solid case .. it's usually your word against the officer who stopped you.. If the ticket is less than the court fee then it's definitely not worth it unless you have enough points on your license that you risk losing it.

I for one don't get pulled over much.. in all my years of driving I've only been stopped twice for a moving violation and once for a parking violation and I've been on the road for almost 20 years now =)

I would say that people should be careful behind the wheel .. if you get stopped so often that this cost is breaking you financially then you might need to reconsider your driving habits in the first place.. just my thoughts.


To me, the fact that you MUST pay to appeal.. is so wrong! That is your right! and you hafta pay to exercise your rights?! I agree, a lot of times, its not worth the fight cause the amount the ticket may be reduced is minimal, BUT you have the right to do it, regarldess of the situation!

Originally posted by EvilSadamClone
Which if I had the power I would fight it all the way to the supreme court if necessary. This can be argued to be unconstitutional, ebcause it places people in double jeopardy.


I think this is being exaggerated myself.. it's not uncommon to have to pay court fees / filing fees if you lose .. it's like that here in Ohio as well .. and many ( if not most ) places.. sometimes you get lucky and they will waive court costs if you simply pay the fine or if the judge decides to let you off the hook.. but you opt to take up the court's time with an appeal you're most likely going to lose.. causing a hearing to take place which takes the officer off the street and into the hearing as well.. you will usually end up paying the court fees ..

posted on Jun, 25 2012 @ 12:43 PM
link
This is bs, and it has happened to me. I was accused of disregarding a traffic control device, which I did not do. I have gotten speeding tickits before, and I was caught, I did it, I payed the fine with no question. By the same token, I don't think I should pay this. Now, I have a choice of $56 fine/DTCD on my record, or fighting it with a jury trial. Already wasted two days of work at about $110 each. Officers need to be sure of what they saw, or didn't see. Sick of this already and will probably have to take it.

You will pay if:

#4 is the fallback, it lets the court ultimately override any typical guidelines.. now as for what they would deem as cause for that? .. maybe they feel like you appealed and knew you had no case just to delay paying the initial fine which was simply a waste of the judge's time.. maybe you showed up looking like you simply didn't care.. maybe you didn't speak with respect to the court.. all of those could be reasons for having to pay..

But in the case of my area.. it seems generally speaking that you're liable to pay unless you win.. in which case it depends on if the judge likes you or not..


It appears that the word 'traffic', which just so happens to be the single most important detail here, has somehow managed to become mysteriously omitted from your sensationalistic thread title.

Not only that, but this is only in regards to auto insurance surcharges derived from traffic accidents.

Originally posted by rbnhd76
This is bs, and it has happened to me. I was accused of disregarding a traffic control device, which I did not do. I have gotten speeding tickits before, and I was caught, I did it, I payed the fine with no question. By the same token, I don't think I should pay this. Now, I have a choice of $56 fine/DTCD on my record, or fighting it with a jury trial. Already wasted two days of work at about $110 each. Officers need to be sure of what they saw, or didn't see. Sick of this already and will probably have to take it.

And therein lies the problem... if you appeal it will usually be your word against the officer .. often times they have a record of your speed.. they will lock it in on their radar and use that reading on the ticket.. they can also look back at that data later if needed.. other times it's your word against a traffic camera, which you will almost always lose against.. it's hard to win an appeal usually.. if it comes down to your word against his then the judge will often side with the police officer.

Of course if the officer doesn't show.. usually you automatically win
edit on 6/25/2012 by miniatus because: (no reason given)


Unfortunate that you are pissy already.. and its still early in the day!
While you may think its sensational, it is true. Yes it is in regards to traffic offenses only, which is the first line in the OP.. I did not write the thread saying it was anything else other than traffic realted charges, as I'm sure you read.

So, instead of straight up bashing, do you have an opinion whatsoever on this issue?


Gotta love Massachusetts....appealed a ticket and was given a hearing...during the hearing the police man and the clerk had asked if I had any speeding tickets...I foolishly said no because my last ticket was six years ago and before that when I was in my teens..I'm 40ish now...they went all the way back to my first offense when I was eighteen and needless to say they were highly upset that I gave them false information...they denied my appeal and it wasn't so much that they denied my appeal it was the arrogance in which they treated me...

It's amazing no one from MA has bothered to challenge this.

The MA police ruined a 17yr perfect driving record in just 1 year of pulling me over every 2-3 months. My mandatory auto insurance went from $500/yr to $3600/yr (paid in full up front).... so I couldn't afford to live in MA. anymore and moved to NH, where auto insurance is optional.

The magistrates in many of these towns are juiced in for decades, they run traffic appeals like a business, and it does cost to appeal their decisions. MA. is a horrible state to live in, costs of living are beyond what most people can afford, and the costs, fees, and mandatory payments just to live are rising by the year.

Did you know that if you do not have Health Insurance they charge you a tax of $1000 dollars?


No one in MA challenges anything!

Unfortunate that you are pissy already.. and its still early in the day!
While you may think its sensational, it is true.

I am not pissy.
It is not early.

You leaped from here↑ (title of the article), to here↓ (thread title).


[color=E6FFF2]In Massachusetts, you must PAY to plead NOT Guilty!


So umm yeah, that's quite a difference. Melodramatic sensationalism to build it up, so that it appears as if it is a much greater issue than it actually is.

So, instead of straight up bashing, do you have an opinion whatsoever on this issue?

Yup. I sure do. Here it is:
[color=82FFDE]Drive sensibly. Obey the traffic laws.
Leave your cell phone turned off.
Don't crash into other vehicles.
Voila! Problem solved. No fee.


Am I getting that you think this is not an injustice because it is in regards to traffic charges instead of greater charges?

posted on Jun, 25 2012 @ 01:34 PM
link
same in California - its a good thing I follow the Constitution which does if followed - keeps you out of harms way to some extent - but I pitty the poor cop who wants to oppress me - as his law has no bearing on my law - I am a Soverign - and he is an employee - and I will have Justice to my satisfaction.


Too early to be sour friend!

So yea, IF you actually read the article, you would see WHY the apppeals are down, because you hafta pay to plead not-guilty which the title of this thread.
Fyi, breaking news you must keep the title the same, here and most other threads you can disseminate the information and put a different title. If you didn't only create threads in movies and music forums, you might understand better, oh wells!
I'm sorry you are having a bad day, hope it gets better!!