Well I spotted this while searching videos. I had to take a break from 'WOW' for a bit.

Okay I don't know much about this video.

For those who can't watch it's a lady video recording a bunch of 'orbs' flying from Indiana into Kentucky.

I don't know what I think about this one.....strange.


They do look the same.


They do look the same.

Invasion is if they only LAND. . This looks more like cruise control..


You may be right.

I hope not though.


They seem to travel pretty fast for Chinese lanterns.

My vote is swamp gas.

Nevermind, I'm sure we'll be invaded one day!


i think your right, here two pics of chinese lanterns we put up.

One night i went out with my dog, when i saw these (like 20-30) lights, flying in formation.
They look like the chinese lanterns as well, but they faded one by one...
Chinese lanterns will fade out in a short time, dont know how long this will take excactly, anyone knows? 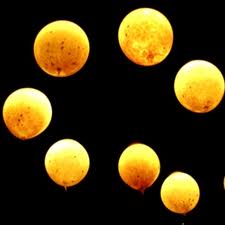 posted on Jun, 25 2012 @ 08:43 AM
link
I cannot tell you or anyone what they definitively "are", but I can offer you some interesting and yet brief discussion as to what they could be.

During the Reagan administration, a secret program was started called "Star Wars", a technology that the US supposedly abandoned if we are to believe what we were told.

We were then told as years went by that such a secret technology was then picked up by the then Soviet Union which to my understanding, took the technology and went where the USA had perhaps gone, but did not want anyone else on the planet to go.

Since cold war espionage was rampant in those cold war days, it was the days of black on black which I can remember vividly. It is such spying that I believe allowed the Soviet Union/Russians to advance the secret technology and to make some startling advances.

Since it has been a while where I could use the term Soviet Union, it gives me a type of memory rush to just think back to the years often referred to as the "cold war" years of the Soviet Union.

Anyway, this old Star Wars technology in the hands of the Soviet Union/Russians was improved upon and some think mastered to develop what is today called "Cosmosphere" technology.

These orbs are crafts usually single or double piloted and use a anti gravity technology for energy and for flight.

These orbs, usually glow, appear as large balls of light, luminescent and capable of changing colors, speed, direction and with today's advances far removed from the Reagan era, it is reported that some of the cosmospheres have a stealth cloaking technology.

Most cosmosphere orbs are 20-40 ft in size which denotes them as cosmospheres with human pilots.

Rumors exist that this technology has been reduced to small glowing balls of light, which are a drone technology with many pilot-less features, akin to control of drones by remote means but with 100% surveillance.

This could explain why larger spheres are seen releasing smaller spheres popping out in numbers.

Anyway, once you do some online research into Cosmospheres, of which a number of videos exist to gain a background on such a topic, you will come to see such spheres of light which are often mixed in with UFO's and aliens incorrectly.

The the smaller cosmospheres balls are associated with fairies and fairy tales, so of course anyone talking about a balls of fire or light would be laughed at, when they could be smaller versions of the larger Russian Cosmospheres.

Please note that cosmosphere orbs always have a round, ball type of luminous properties regardless of size.
UFO's that are created by factions of the USA secret govt. are saucer type, disk shaped, crafts of scientific design.

These two distinct design differences denote the two separate secret factions of Russia and the USA that possess and use anti-gravity technology.

Since such technology also helped to advance other fields of science to include computer technologies, STUXNET and FLAME are in my opinion, by products of such technologies from cosmosphere advances.

Time temporal distortion is another researched element, because such an advanced energy source that powers cosmospheres is said to create time displacement and believed to be somehow related to time travel or at least capable of creating short term time temporal capabilities.

Lastly, I would state that whenever I see or read about such orb like objects in an around the USA, I consider that instead of them being UFO's with aliens, they are Russians on missions doing things only TPTB know.

Take the time, research cosmospheres, get the background going back to the beginning or early years of Star Wars and I am certain you and others will come to see these orbs not as UFO's, but as Russians violating American air space, just as we violate their airspace with impunity.

Such technology cannot be prevented from going where they want and it is in the interests of the USA not to bring attention to a technology we supposedly didn't want and that was refined into what we see today in strange large balls of light, traveling at impossible speeds and doing things just like a UFO would do, but shaped differently.

Cosmospheres vs UFO's. Cosmospheres Orbs are Russian and the saucer, craft, disk shaped are ours. Somewhere in the mix there are alien crafts, but they are advanced far beyond this technology.

What we are seeing I believe are human in design and development, but they are Russian none the less and that is what I would keep in perspective when reading about such orb reports, because they will be used in a world war.

Note where such reports are located and I will bet you there is a military base near by.

Anyway, there you have it. I hope it helped. Take a look at cosmospheres when you get the time.

That was a great post I don't know if I believe it all but it is interesting. thanks.