posted on Jun, 21 2012 @ 08:55 PM
link
This Video is somehow showing the Obama Birth Certificate supposedly photographed by reporter Savannah Guthrie with "Hawaii" spelled as "Huawii" with a "u".

The green one has a very clear "a".

I have no idea if this is legitimate.

But it sure makes for a good conspiracy

Now who would make that mistake in Hawaii when the thing was for the President of the United States ?

I'm sure they checked and re-checked at least 10 times.

This is absolute proof that the versions released by Obama to the press (ie. the AP version) and to the general public on the Whitehouse servers (the long form Pdf), are forgeries. Upon a close inspection of the photo Savannah Guthrie took of Obama's long form Birth Certificate, I've found that the document states that Obama was born in "Honolulu, Huwaii." This could be one reason why Obama and the State of Hawaii refused to allow the public to see this document. Obama's lawyers have argued this would be too much of an embarassment for him to produce this document in Court, in the Berg v. Obama et al case in 2008. Correcting this spelling error, is proof that what Obama released was not a "true copy", but, a forgery.


Here is supposedly the "Savannah Guthrie photograph"
(scroll to the right) 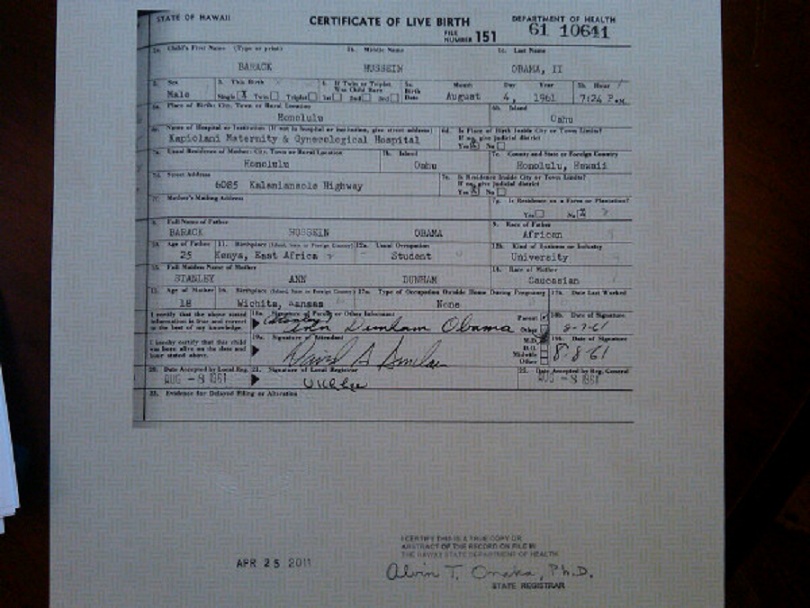 posted on Jun, 21 2012 @ 09:51 PM
link
In the original polynesian language there was a word spelled that way. I am sure it was not the name of the islands or any nation. Meant something else. May come to me at a later time. Although, I cannot be one hundred percent sure. The language is tricky.

What you can do, if you cannot find any really old hawaiin story talker to tell you what the word means, is go HERE and contact that person listed there and ask them for a transliteration of that word.

posted on Jun, 21 2012 @ 09:53 PM
link
Aha i love that 'n-word' spelling errors on official documents that's a classic i'd say, dang he's got some balls you gotta admit it.I recall it was theorized at some point that the FBI was involved in this forgery but when you see this i say it's unlikely, it's an an amateurish work from A to Z.
Spread the word around and please don't elect a kenyan next time

Do you really think someone wouldn't have caught such a silly mistake? The scary answer is nope , it just slipped everyone's mind lol. I wonder if its just a type , but that would mean you would see some other BC , that actually have the same mistake.

Perhaps once the original is sent out to compare , this whole thing will be cleared up . But if it does turn out to be , fake , then we will cross that bridge when it comes lol somebody is lying to me...

posted on Jun, 21 2012 @ 10:32 PM
link
I could make a birth certificate look more authentic, than the one they're trying to pass off as "original". Doesn't Washington have graphic design artists, with Adobe Photoshop...or what? Where is Bush's people? They know HOW to get the job done.