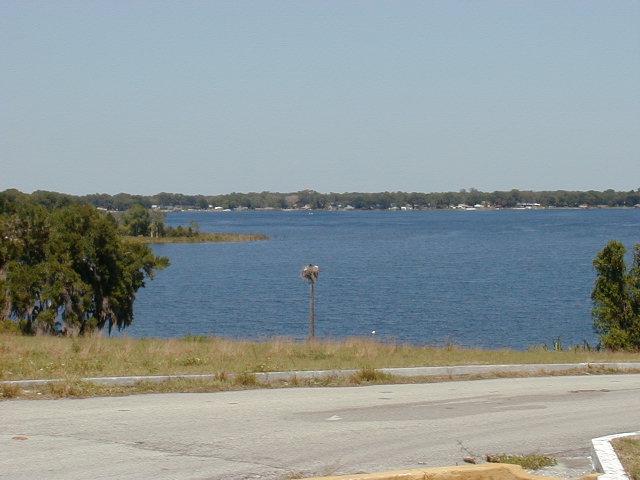 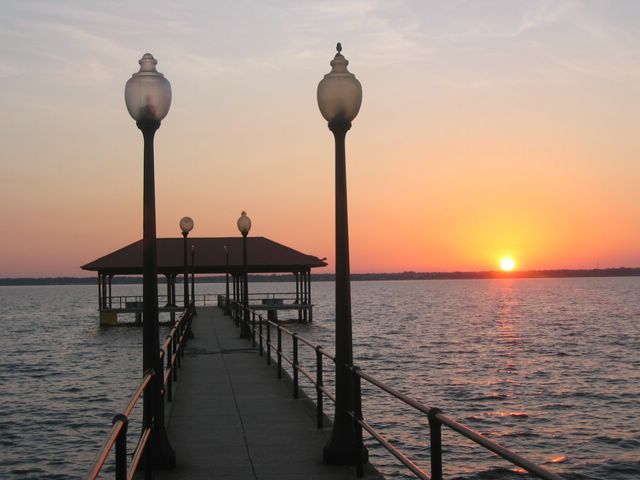 A few days ago a friend of mine went to put his boat in, and he couldn't find any ramps with water. Today another friend of mine walked out across the barren lake and took this picture of the last bit of water draining out. 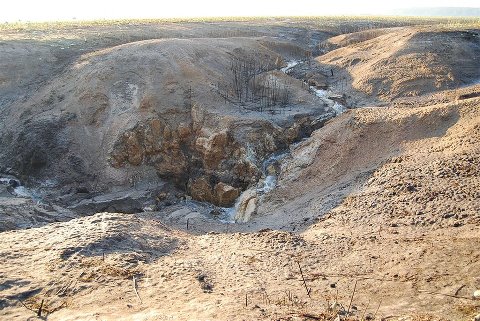 And an online pic from the last time it drained

Now, this particular lake has a cycle of draining about every 25 years. The Florida Aquifer is limestone, and sinkholes in this lake are fairly common. When the aquifer gets low, the lake will drain, but it rarely goes 100% dry. In fact, I don't know anyone that can remember the last time it went 100% dry. Also, it is known to be on a 25 year cycle, but it drained in 1999 and 2007. Recently it was making a pretty good comeback and boat traffic was becoming a common sight on the lake. Also, just prior to this week's draining, we had a period of 10 straight days of heavy afternoon rains. The lake and the aquifer should have been in recovery mode, not draining mode. We also had a piece of the tropical storm about a month ago. We are technically in a drought, but we appeared to be recovering from that drought.

Another oddity. I have a runoff pond behind my house. Probably about a 3 acre pond, and it was much, much lower back in Dec/Jan, but it is currently pretty full, with a nice contingent of bream, bass, and catfish, 2 river otters, and about a 4 foot gator.

The Lake Jackson site has been around for centuries, so its cycles are well-known. The lake boasts bass-fishing tournaments, bald eagle and other endangered bird species, wetlands, indian burial mounds, and a rich history.

Lake Jackson State Park is more than eight centuries ago, Native Americans inhabited the area around Lake Jackson, just north of Tallahassee. The park site was part of what is now known as the Southeastern Ceremonial Complex. Today, it encompasses six earthen temple mounds and one possible burial mound. The largest mound is 278 feet by 312 feet at the base and approximately 36 feet in height. Artifacts of pre-Columbian societies have been found here including copper breastplates, necklaces, bracelets, anklets, and cloaks.

Cool Pics from the last time it drained.

People might say Global Warming, or Gulf Oil Spill, but I think it is from the Metropolis of Atlanta robbing water that typically flows southward to Florida. There have been lawsuits ongoing for years, because they directly impact the ecological system in our Apalachicola Bay.

This area also has one of the World's Largest Fresh Water Springs at Wakulla Springs, and it is on the same aquifer that Lake Jackson is on. The spring pumps an average of 200 to 300 million gallons of water per day, but has been known to pump over 1 billion gallons on record setting days. That is approximately 14,000 gallons per second. This spring has the longest and deepest submerged cave system in the world, and they have found Mastadons and Sabre-Tooth Tiger skeletons in the caves, as well as voluminous caverns that used to serve as camps for paleo-indians about 12,000 years ago. Wiki

I bring up the spring, because it used to be dry. When the paleo-indians and Mastodons lived here, the caves were dry. What are the chances of them becoming dry again? What would that do to the ecology and economy? What would it mean for mankind?

In this transition year of 2012, anything is possible. Lake Jackson has drained 3 times in 10 years instead of its usual once every 25, so what if Wakulla Springs starts to go dry also?

How long does it take for the fish population to come back enough to do tourney fishing, or any fishing for that matter?

Star and flagged because this is definitely interesting.

Curious about the fish.

Originally posted by EmperorXyn
That is pretty cool. I wonder how long it takes for it to fill up again.

I've been living here for about 12 years, and when I got here it was pretty dry still from the 1999 draining. It stayed dry and grassy, and was just starting to look like a lake again, so I'd say it takes a good 10 years to fill up again, and probably more like 20 to 25 years to get back to its full glory.

I had some friends that moved here in 2006, and they rented a place on Lake Jackson, but they couldn't even see water from their house, they had to ride a four-wheeler out to the edge of the water, LOL! But, by last fall, they actually had a place on the lake as promised.

What a strange story.

Originally posted by liejunkie01
I am curious,

How long does it take for the fish population to come back enough to do tourney fishing, or any fishing for that matter?

Star and flagged because this is definitely interesting.

Curious about the fish.

I've heard stories from life-long residents of times where the news broadcasts would ask people to run out and save the fish. People would scoop giant bass and catfish out of little mud puddles all over the lake and take them home to keep them from just dying and going to waste. They didn't repopulate the lake, they just ate them, but it was still better than letting them just die needlessly.

I've also seen pictures in local businesses of a whirlpool over the sink hole, and boats tied off trying to keep other boats from being sucked in. Apparently years ago they also dumped 100s of tons of construction debris down the main sinkhole, dumptruck after dumptruck coming out and trying to plug the hole, but it drained again anyway.

As for the fish, I can only guess that the fish come back fairly quickly, because it is a great fishing destination, but it has historically drained every 25 years, so the fish population must recover pretty quickly. I would also guess that since it is now a state park, they probably re-stock it with some of the fish to get the tourism kickstarted back up.

I expect the water disputes between cities, states, and countries to increase in the near future.

Little streams running down the hole...

and a geologist descending into the hole....


Very neat! I've heard rumors of water scares and all sorts of rubbish for a while now. I wouldn't read too much into it. The way water behaves can baffle even the old and the wise. From what I can recall of drained lakes in the past, you may wake up one day and the lake be completely full again. Say your hail mary's before bed just in case though.


Say your hail mary's before bed just in case though.

Oh ya, I always do. And then I alternate between cuddling my wife, and my shotgun.


Here is a video I found while exploring the links provided by wiki.

I find this very interesting because I do alot of fishing in the local waterways around here.
edit on 19-6-2012 by liejunkie01 because: (no reason given)


WOW, thanks! That is just amazing. From 1:20 to the end is just unbelievable. I remember when I moved here in 2001, the lake looked just like the beginning of that video. Mostly grass and wetlands with some areas of open water. Here recently it was getting to be a lot more open water and less grassy, but it looks like it will be starting all over again now.

People might say Global Warming, or Gulf Oil Spill, but I think it is from the Metropolis of Atlanta robbing water that typically flows southward to Florida. There have been lawsuits ongoing for years, because they directly impact the ecological system in our Apalachicola Bay.

Okay - those are fighting words.

I'm pretty sure most of the lakes in the Greater ATL area are below full. The issue though is not just water usage by citizens, it's also watershed management by the power companies and the Army Corps of Engineers, who manage Lake Lanier. Badly, I might add. Of course the Chattahoochee is the main water artery between here and there. The thing is, if you travel 431 and go through Eufaula and all the little lakes around the border from GA to AL to FL - they're typically full or close to it. At least before this past few months of drought. Maybe members can chime in here but they look close to full on the chart..

So, we're not full, they are full and you are low. So something weird is going on.

Originally posted by getreadyalready
Apparently years ago they also dumped 100s of tons of construction debris down the main sinkhole, dumptruck after dumptruck coming out and trying to plug the hole, but it drained again anyway.


Gotta love it. Puny humans. I was wondering what they think the natural mechanism for plugging it back up is? It takes millions of tons of concrete and sluice gates behind big dams to reliably control the flow of such a large amount of water. So where is the "gate" that periodically opens and closes on this 6 mile lake?

Maybe its an underground alien base

All "con"jecture aside, I would like to point out something in this pic you brought in your OP:

Anyone else see the ancient forest along that even older riverbed? Those trees are worth money. And those outcroppings of rock may hide minerals and like you said caves with fossils and stuff. I would be all over that.

posted on Jun, 19 2012 @ 09:55 PM
link
The same thing is happening with Lake Tiberius/Sea of Galilee as the Israelis are draining the life out of it and if you look at satellite pictures of the Caspian Sea (not sure if this one) the change is drastic

I didn't know this sort of thing happened.

Are there other lakes nearby that the wildlife can move to ?

posted on Jun, 20 2012 @ 06:38 AM
link
That's really weird, i feel bad for all the wildlife that used that lake to survive. I remeber when i was young i went to Colorado (almost 100% it was Colorado) and we were driving next to what use to be a lake but it was completely dried up. I went back around eleven years later and the lake was back,. So maybe your lake will come back too, you just never know with mother nature.
edit on 20-6-2012 by VinnyPNY because: (no reason given)