posted on Jun, 19 2012 @ 01:57 PM
link
Could it be that there really are mermaids. I(my daughter) believe that they travel with whales and dolphins to keep them safe from predators. Let me know your thoughts.

But no, I highly doubt they truly exist(ed).

Thought I had read it somewhere (well, not on Wikipedia, but I guess it's the same story)

Fiji mermaid
edit on 19/6/12 by woogleuk because: (no reason given)

Creatures were created like minators, pegasus's, griffons, centeurs and mermaids. 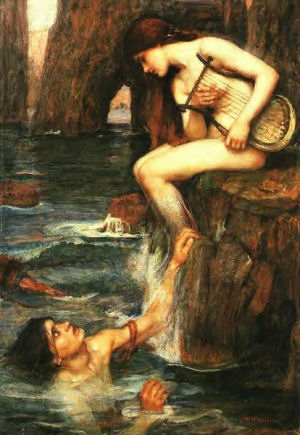 This is probably why there are so many dolphins dying recently, with stupid humans at war with these mermaids.
www.abovetopsecret.com...

Originally posted by swampcricket
Could it be that there really are mermaids. I(my daughter) believe that they travel with whales and dolphins to keep them safe from predators. Let me know your thoughts.

Well mermaids must not live in the China Sea, if of course they do exists that is...

If mermaids exist , they do a great job hiding like god does.

posted on Jun, 19 2012 @ 03:07 PM
link
I'm going to go ahead and vote unlikely, but there are vast stretches in history where many ideas are perfectly valid. I have grown warm to the theory that life has spawned, died out, and spawned again here on earth, so if you feel this atmosphere has seen mermaids, why the hell not? I wouldn't go spending 3 million on an expedition though :p

posted on Jun, 19 2012 @ 03:09 PM
link
For what its worth, I really love the old legends of demonic mermaids luring sea-farers to their deaths. Mostly because a) It makes a killer story (no pun intended) and b) Mermaids are hot, fish tails and all.
edit on 19-6-2012 by BS_Slayer because: (no reason given)


I think what are depicted as Mermaids are real species of EA*RTH or beyond.


I've considered this possibility with various similar topics as well. I find it funny that every culture seems to depict dragons of all types, which all share the same basic shape....and here we have dinosaur bones all over the world. Aside from the fire breathing, I don't really think a dragon is all that far fetched.

After all if one actually made their presence known they would wind up on a gurney in a government lab somewhere with a mad scientist trying to figure out how they tick.

If they do exist I hope they are as good as big foot in keeping hidden away from humans. We are curious and could do something stupid to screw up whatever they have going on. Look at where are dumb butts have gotten ourselves so far...We are a bunch of losers waitin on the world to end.lol..Instead of coming to together and adapting and overcoming the greed of the Rich and Powerful that are destroying us.

posted on Jun, 19 2012 @ 04:09 PM
link
I dont believe so, but if they did exist.. they sure wouldnt be hot naked beautiful women. Theyd be slimy or scaled with big honkin gills and no boobies. Sorry guys. I imagine rum, too much salt water, and contaminated food along with extended times on the oceans would make a Dolphin seem pretty sexy.

In my culture we have a sort of mermaid story, but theyre just called water spirits.One was an old man that gave us horses AKA elk-dogs or Big Dogs.


Yeah, didnt you know that movie " The Little Mermaid" was based on a true story but Disney gave it a happy ending?? Truth is we're still fighing the great Mermaid Wars of 1749. Geez... pick up a history book once in a while, deny ignorance, and all of that...


Did you not hear Aquaman and the mermaids ride the dolphins into battle and throw starfish at cruise ships.

Originally posted by Rapha
Back in the days of Noah, the fallen watchers did many experiments with D.N.A.

Creatures were created like minators, pegasus's, griffons, centeurs and mermaids.

Why am I instantly wondering where the Minotaur, Pegasus, griffin, centaur and mermaid bones are?
You show me some minotaur bones, and I'll stand corrected.
edit on 19-6-2012 by AFewGoodWomen because: whatever

The object at the bottom of the Baltic Sea is the great entrance to the Kingdom of Mer.
This makes so much sense.

If it makes so much sense where is the definitive proof? My daughter started this thread and she is 8 yrs old and is intrigued by the fact that mermaids/mermen could or still do exist. Let's help this eight year o,d happy by giving positive or negative evidence she can handle the negative replys as well as the positive responses. Remember she is eight so keepit PG please. All thoughts are welcome. Thanks and lets make her day !


I actually watched the mocumentary you're probably basing your facts on, and I've got a lot to say to you and your kid. First things first, Parenting: You're doing it right. I like that you're encouraging your daughter to question things. I feel like a few of the more recent generations have been so driven to be doctors and lawyers that many of them forgot they had imaginations and made this world dry and stale. But down to business.

I think that the fact that these "mermaids" could is exist is totally possible. I believe that if there were some sort of evolutionary oddity it would be that some of our ancestors would naturally be drawn to the sea. There is actually a website that is based around a theory that is similar (www.aquaticape.org...)

As humans we are naturally drawn to the water, the notion of what is beyond us, and the sea is just that. It is beyond us or our ability to explore the entire thing in the history of man, let alone in this lifetime. I think that there are many things we are unaware of that exist in the ocean and that we'll never know. They're many tales of sea monsters and mermaids that will out live any or all proof of them not existing. The fact that such a god like species like us humans would misidentify a Dugong for a beautiful woman is something we would hate to admit to ourselves. But I digress.

I think that if mermaids did exist, they would have developed some sort of echolocation ability like most underwater mammals. Do I think they would hang out with dolphins, possibly. If they had the same basic model of communication I think that a dolphin would be able to comprehend what is being said to it. They are incredibly smart creatures, and if this has been going on for thousands of years they might work out some basic migration paths and work together to stay alive, solely out of instinct.

Would they be super hot babes and guys with six pack abs and flowing hair?
Nope.
They would most likely be hairless so they would be more maneuverable in the water and also rather fat, and blubbery, like a seal or walrus. If not covered in blubber, they would have a very think epidermis and be able to adapt to underwater temperature changes much like dolphins.

If they do exist, they certainly do not look like Ariel.