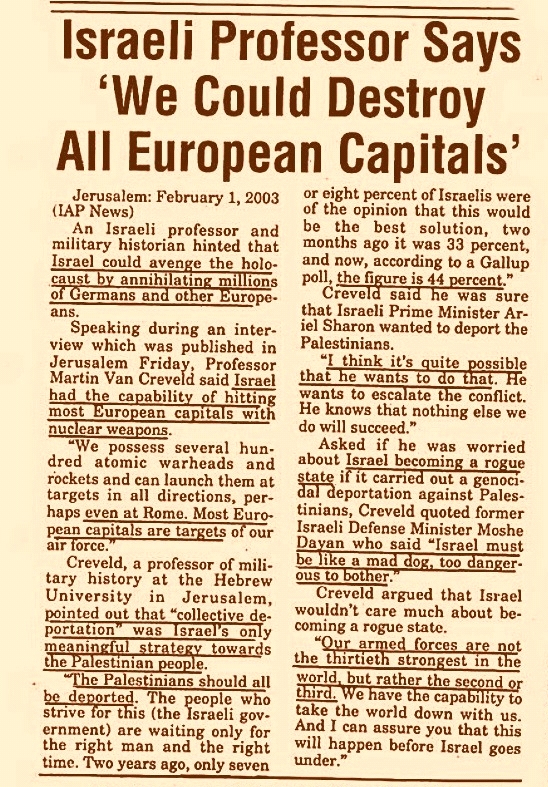 In remarks reported in the London daily, The Guardian, on Sept. 20, 2003, Prof. Martin van Creveld said that faced with the prospect of “the collapse of the Israeli state society,” the Zionist entity would come under pressure to “transfer” Palestinians out of the land — reminiscent of the ethnic cleansing by ancient Hebrews 3,000 years earlier.

'WE COULD TAKE THE WORLD DOWN'

But would the world, particularly the Europeans, permit such ethnic cleansing today against the Palestinian people?

According to Creveld, the Jewish Entity is not concerned if deportation of the Palestinians caused it to be regarded as a rogue state. The Hebrew University professor went on to note:

“Our armed forces are not the 30th strongest in the world, but rather the second or third. We have the capability to take the world down with us. And I can assure you that this will happen before Israel goes under.

“We possess several hundred atomic warheads and rockets and can launch them at targets in all directions, perhaps even at Rome. Most European capitals are targets for our air force.

“Let me quote Gen. Moshe Dayan: ‘Israel must be like a mad dog, too dangerous to bother’.”

In the eyes of many Israelis, an attack on European cities and the annihilation of millions of Germans and other Europeans would be seen as avenging their suffering during the Holocaust™.

Do you post the same newss when Iranian Cleric says "Mahdi will convert all non-believers to Islam"?

I bet you dont. Weak ass post to be honest and has nothing to do with WWIII.

posted on Jun, 18 2012 @ 10:35 PM
link
This is like quoting Obama's preacher at the church he went to and saying Obama believes everything Jeremiah Wright says.

Part 1 – America as an Israeli Colony

“I don’t care if Americans think we’re running the news media, Hollywood, Wall Street or the government,” Jewish columnist Joel Stein wrote in the Los Angeles Times in December 2008. “I just care that we get to keep running them.”

Mr Stein’s reckless candor in admitting that the Jews ran America was to cost him his job at the LA Times.

“When the world looks at America, what it sees is an Israeli colony.” — Paul Craig Roberts

America has been taken over.

Slowly and imperceptibly, duped by lies and lulled into complacency, Americans have let their country slip into the hands of a fifth column: of a hostile ethnic elite whose primary allegiance is to Israel, a country built on stolen land and engaged in systematic genocide.

If the goyim have lost the game of life and their hard-won freedoms to the Jews, it was because they didn’t know they were playing a game in the first place. A game for the highest possible stakes.

The world that awaits us, if our New Masters prevail, will be a grim dystopia. It will be a spiritual wasteland in which an unprincipled elite rides roughshod over the teeming masses. It will be a cruel world of exploitation, moral darkness, and unspeakable brutality. 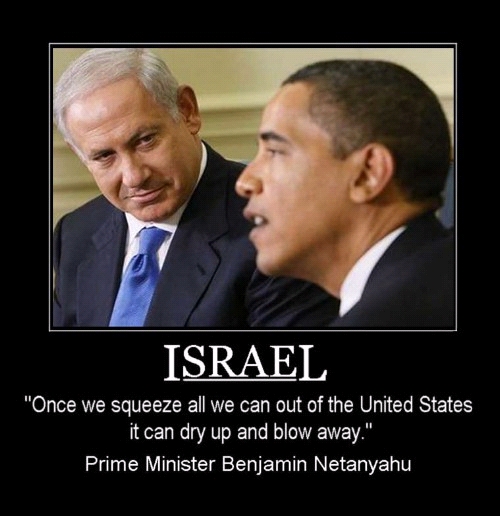 It seems that Israel poses a much greater threat to the security of the European cities than Iran...

And "deport" Palestinians? This man was born in another country and he is talking about deporting Palestinians.