posted on Jun, 17 2012 @ 06:48 AM
link
I did not see anything on these Soldiers noted so far, but trust the news can be re-directed to another appropriate Thread, if required. 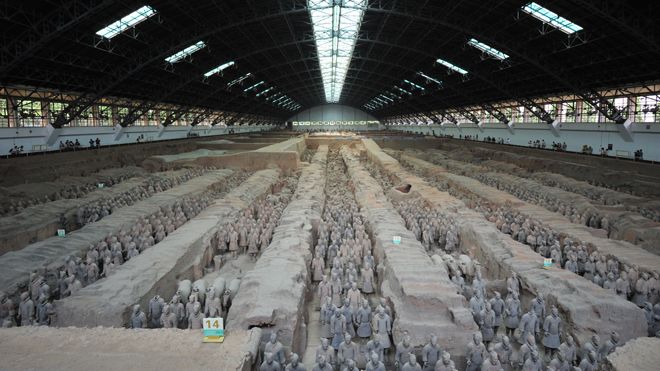 Just liked this Photo. Quite an eyeful, and a Grand Scale.

Some 100 new Soldiers, Horses and Weapons have been found, but the exciting aspect is Colors are appearing in some of these newest finds.

The most significant discovery this time around is that the relics that were found were well-preserved and colorfully painted," Shen, deputy head of the museum's archaeology department, said. "The existence of colors preserved after two millennia was a surprise to the archaeologists. The other figurines recovered and on display in the museum are of a uniform earthen color, the hues from red clay and charcoal long since worn away. Some even have painted eyeballs and eyelashes.

But the new figurines aren’t in perfect condition: According to Reuters, this group of soldiers fell prey to arson and looting when military leader Xiang Yu rebelled against and overthrew the Qin Emperor

The new finds are unique in that the color pigment they were originally painted with has been preserved, and the details remain clear — some soldiers have black and taupe eyeballs, and one even had eyelashes, according to the Guardian. Warhorse sculptures, chariots, drums, and a Qin Dynasty-era (221-206 B.C.E.) shield decorated with red, green, and white patterns have also been unearthed. Much of the color of the other sculptures had been lost due to fire and water damage. 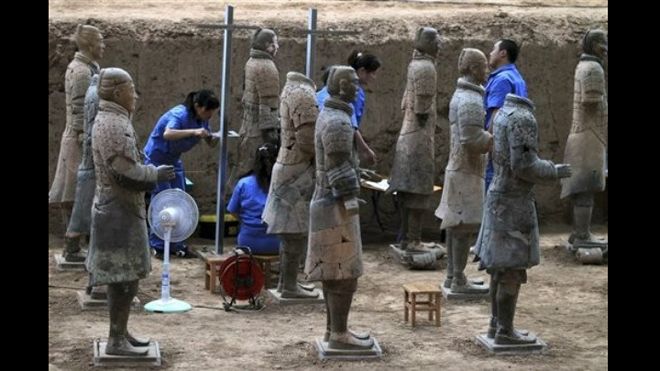 I have not yet found Photos of the "colored finds" but when located and available I will place them here to see. Apparently this is the first time they have found shields in this dig.

posted on Jun, 17 2012 @ 07:03 AM
link
Found another Article with quite a few newer photos of the work being done, such as the following 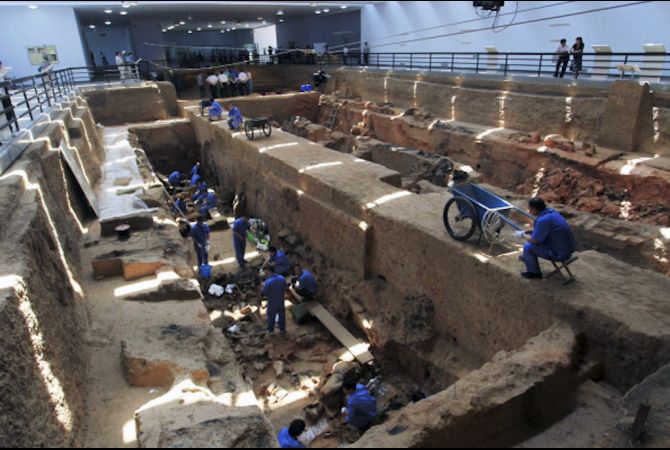 This picture taken on June 9, 2012 shows Chinese archaeologists at work in the extended excavation of the Pit One of the Terracotta Warriors and Horses Museum in Xian, as they measue and record the dimensions of the latest terracotta warrior find in Xian, China's Shaanxi province. Excavations in China have unearthed a stunning new collection of 2,000-year-old terracotta warriors and hundreds of other artefacts, as Chinese archaeologists unveiled 120 new terracotta warriors at the Qin Shihuang Unesco World Heritage site in Shaanxi province.

And it seems another 10 have been added to the total. 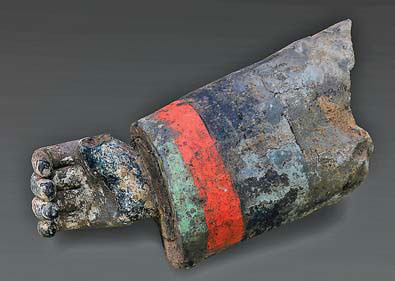 Forearm and "Sleeve" depicting the Coloring being found 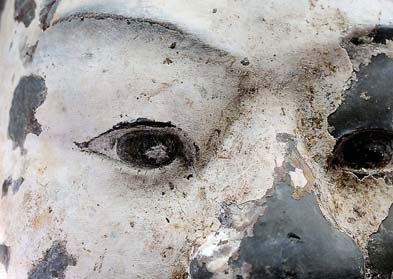 Archeologists working on the latest dig at the site of the Terracotta Warriors in Xi'an say the project has already turned up vital historical finds.

Experts restarted work on the No 1 pit of the Terracotta Warriors in 2009 and have so far unearthed 310 artifacts, including parts of chariots, weapons and tools, along with 12 pottery horses in three groups, and about 120 more warriors.

"For the first time, we have found a painted, cortex shield on a chariot, which is the first of its kind to be discovered in any of the three pits," said Cao Wei, curator of the Museum of the Terracotta Warriors and Horses of Qin Shi Huang.

Shields used by soldiers in the Qin Dynasty (221-206 BC) were 60 cm long and 40 cm wide, with red, green and white geometric patterns.

"The shield was partly broken, and it's believed it was the type used by a high-ranking official, as it's larger and had colorful patterns," said Zhang Weixing, a researcher on the archaeology team.

"The brightness of the painting exceeded our expectations," he said, adding that it was a surprise to unearth such a number of painted figures as many archaeologists considered before the excavation that the paintings on the figures would be damaged because the pit had been damaged in a number of ways.

And some guesses are starting to payoff it seems.....

Yuan Zhongyi, the former curator who presided over the No 1 pit's first excavation, said one of the important achievements of this dig is the arrangement of the Qin army.

"Archaeologists speculated in the past that the ancient army should have a wing guard to prevent enemy attacks from the side, and this excavation confirmed that the Qin army really had wing guards," Yuan said.

According to Xu Weihong, the researcher in charge of the excavation from 2009 to last year, archaeologists found a number of warriors with black or gray-brown eyes, and even a figure with red eyeballs and black pupils.
"We also found a figure that was believed to have had a high rank as he had well-made and colorful armor," Xu said.

And they are finding "Others" now as well.

According to the team leader, archaeologists also found a pit with performers.

"From the pit located in the southeast part of the mausoleum of Qin Shi Huang, the first emperor of the Qin Dynasty, we unearthed 41 figures that were very different from the military figures. From their gestures, we can see that they were performing," Shen said.

"Among the performers, we found one that was 2.5-meters tall, and all of the figures had red, purple or black and red patterns," Shen said.

It also noted that the speculation about the "burning" that occurred and discolored most of the previously found artifacts was due to intentionally by the new leader, following Qin Shi's death.

I had no idea about this army... Gives me something to research later tonight after work

posted on Jun, 17 2012 @ 10:01 AM
link
I swear they look like actual people who were pulverized into stone. The detail of them is amazing. And they look so real and human like. There is no way some artist was able to do that many.

Originally posted by Manhater
I swear they look like actual people who were pulverized into stone. The detail of them is amazing. And they look so real and human like. There is no way some artist was able to do that many.

They used mass production methods, common bodies but individualized heads - quite a feat but what a waste of resources - another monument to one guys ego

posted on Aug, 17 2012 @ 10:07 PM
link
There is another article regarding the King of this Army site, which is discussing the Tomb itself.

Opening secret tomb of China's first emperor waits for science details some of the other aspects of this location.

Buried deep under a hill in central China, surrounded by an underground moat of poisonous mercury, lies an entombed emperor who's been undisturbed for more than two millennia.

The tomb holds the secrets of China's first emperor, Qin Shi Huang, who died on Sept. 10, 210 B.C., after conquering six warring states to create the first unified nation of China.

The answers to a number of historical mysteries may lie buried inside that tomb, but whether modern people will ever see inside this mausoleum depends not just on the Chinese government, but on science.

"The big hill, where the emperor is buried — nobody's been in there," said archaeologist Kristin Romey, curatorial consultant for the Terracotta Warrior exhibition at New York City’s Discovery Times Square. "Partly it's out of respect for the elders, but they also realize that nobody in the world right now has the technology to properly go in and excavate it."

The Terracotta Warrior exhibition, featuring artifacts from the Qin dynasty and nine life-size statues from the extended burial complex built for Qin Shi Huang, is on display through Aug. 26.

Qin Shi Huang (pronounced "chin shuh hwang") was born in 259 B.C., first son to the king of Qin, one of six independent kingdoms inside modern China. These kingdoms had been warring for more than 200 years, but through a combination of military strength, strategy and natural disasters, Qin Shi Huang conquered them all, proclaiming himself not just a king, but also an emperor — the first of China.

Scholars still debate the details of how this occurred, and what unique tactics allowed the Qin emperor to achieve what no one had managed before.

There is some discussion about the site offered, as well as talk towards the prospect of opening the Tomb itself. Some concerns?

"In archaeological conservation, every year you have major new developments," Romey said. "When we began excavating (the soldiers) in the '70s, the minute they were exposed to air and sunlight, the pigment just flaked off.

And then there is of course, the Mercury Moat

Ancient writings say the emperor created an entire underground kingdom and palace, complete with a ceiling mimicking the night sky, set with pearls as stars. Pits full of terracotta concubines have never been discovered, though experts predict they exist somewhere in the complex.

And Qin Shi Huang's tomb is also thought to be encircled with rivers of liquid mercury, which the ancient Chinese believed could bestow immortality.

"It's kind of ironic," Romey said. "This is probably how he died, by ingesting mercury. He was taking all these mercury pills because he wanted to live forever and it killed him by the age of 39."

That moat of mercury also presents another reason why archaeologists are loath to explore the tomb just yet — doing so would likely be very dangerous, according to soil samples around the tomb, which indicate extremely high levels of mercury contamination.

In the end, scientists and historians must always weigh their desire to know more with the damage such inquiry would cause.

"Archaeology, ultimately, is a destructive science," Romey said. "You have to destroy stuff in order to learn about it."

You can also review the Wiki Link about this topic.

Originally posted by Manhater
I swear they look like actual people who were pulverized into stone. The detail of them is amazing. And they look so real and human like. There is no way some artist was able to do that many.

I've seen them up close and even though they do look amazing, they still look like statues.