page: 1
30
<<   2  3  4 >>
log in
join
share:
burntheships
+5 more
posted on Jun, 4 2012 @ 03:00 PM
link
While Barack Obama has steadfastly denied connections with former domestic terrorist Bill Ayers,
the Weather Underground radical, it appears that in fact, his close connections to Ayers,
a known terrorist has been a carefully kept secret.

Big Government has obtained more proof of this coverup, and now has published the the story as
shown complete with screenshots/pictures from its site:

We now have proof that Obama's association with Ayers continued even after
Obama had been elected to represent Illinois in the U.S. Senate 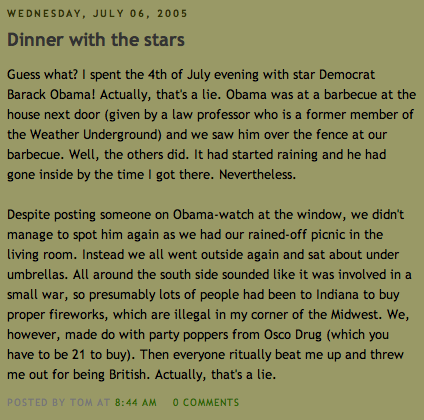 Dr. Tom Perrin, Assistant Professor of English at Huntingdon College in Montgomery, Alabama, was a graduate student at the University of Chicago at the time, and maintained a blog called "Rambling Thomas." He lived next door to Ayers and Dohrn in Hyde Park. He wrote at 8:44 a.m. on July 6, 2005:

Guess what? I spent the 4th of July evening with star Democrat Barack Obama! Actually, that's a lie. Obama was at a barbecue at the house next door (given by a law professor who is a former member of the Weather Underground) and we saw him over the fence at our barbecue. Well, the others did. It had started raining and he had gone inside be the time I got there. Nevertheless.

Of course no sooner did Big Government contact Mr. Perrin for his comments, his blog was
scrubbed. Amazing! Really? But, the screen shots are proof it was there!

Obama's presence at the Ayers barbecue was also witnessed by Ben LaBolt
and he gave the New York Times in 2008 his statement:

"I too saw Obama at a picnic table in the Ayers/Dohrn backyard, munching away--on the 4th of July."

"I dont regret setting the bombs" Bill Ayers said. " I feel we didn't do enough"

Well, it sure seems that Obama did in fact Pal around with terrorists!
edit on 4-6-2012 by burntheships because: (no reason given)


Yes, its creepy, scary and sad. Andrew seems to be alive and kicking though,
hard to keep a good man down.

Ya know what I mean?


Character matters. We hear that all the time. But somehow, Obama gets a pass time and time again.

I don't know what he ate at Bill Ayers house.

posted on Jun, 4 2012 @ 03:22 PM
link
Two terrorist peas in a pod, and there as a lot of white washing of their histories didn't they say Ayers was the one who wrote obama's book?

Originally posted by loveguy
Why am I not surprised?

Well, I'm totally surprised! What the Hell was a bunch of commies doing celebrating the Fourth of July!

Yes it does Beez, yes it does!

But somehow, Obama gets a pass time and time again.

You know what, lets hope this one hits the mainstream too.

ETA: Heres to the mailman:

Lets hear from the Milkman and The Butler!
edit on 4-6-2012 by burntheships because: (no reason given)


Yes, in fact Google has it listsed under books written by Ayers!
ETA; Here it is:

Google liest that Ayers actually did write "Dreams From My Father".

ETA: And here too:

III. Leftist Groupthink: How Intellectuals Lost Their Ability to Reason
In brief, the history of “liberalism” covers the development of every precious idea to the Western mind, including the Bill of Rights, Constitutionalism, the free market, etc. The root word means “liberty,” after all. Yet this “classical liberalism” gave way to liberalism as socialism, as the term is now understood today, and all hell broke loose.

The main driving force behind the socialist worldview, which is the default view of the American Democratic party, is the writings of Karl Marx. This is important because the project that most distracts today’s typical Western leftist is Political Correctness, which is a tendril of cultural Marxism. Likewise, the central debate tactic is another Marxist trope called Critical Theory.

But as modern liberals have walked away from the Western canon of Art and Literature, and revealed religion, they have moved further into a very murky swamp. This Slough of Despond swallows them as they call out to lure others into its reedy interior, to sink and drown. Misery and insanity crave company. But once society trades a set of core truths for increasingly tenuous and farfetched philsophies, the ability of the average person to debate important topics disappears. This is because there is no longer a baseline from which to evaluate the statements and ideas of the self and others. In its place comes a politically predetermined set of goals that will eventually be installed, without any regard to logic or consistency, like Nietzsche’s Will to Power. And this is where Critical Theory comes in.

How to describe it when a "hero" breaks your heart? It's not my heart that is breaking, but someone whom I love and care for tremendously.

Sorry if I went off-topic...


Originally posted by loveguy
Why am I not surprised?

Well, I'm totally surprised! What the Hell was a bunch of commies doing celebrating the Fourth of July!

Plotting ways to bring the country down?


The continued connection between Obama and his radical, domestic terrorist associates
until mere months before he launched his presidential campaign is sharply at odds with the
way Obama minimized the relationship

Ayers: "I dont regret anything I did"

posted on Jun, 4 2012 @ 04:29 PM
link
It is quite possible that Obama will now get destroyed by scandal, possibly so as to back hand Rmoney through the goal posts...or maybe in a rare event, if scandalized early enough, oust the incumbant prez, and give Hitlary the Gnomination?


It is quite possible. Funny this just popped up! ?
Wth?

Those close to Hillary Clinton are starting to openly speculate that the secretary of state will run for president again in 2016.

I kinda wish I was never right ever

you know with all the dead ex lovers and given Ayers bloodthirsty past, i wouldn't put murder as exclaimation point past these pee..

posted on Jun, 4 2012 @ 05:03 PM
link
Barry knew who had the best fireworks around for the 4th.
No sparklers and party poppers for Bill!
Gee, now there's a whole different kind of fireworks going on.

Too bad the MSM is going to still run cover for him and ignore this story.
One man's terrorists is another man's school board buddy.
I hope he remembers that next time he thinks about droning some funeral in Pakistan.
edit on 4-6-2012 by Asktheanimals because: corrections

The line starts the same " I did not have a *** relationship with that (insert here)
terrorist or woman .

Vincent Foster and all that. Yep.
edit on 4-6-2012 by burntheships because: (no reason given)

The author does his best (probably under orders) to squash the connections as simply casual or non-existent,
but at the same, it makes the connections crystal clear.
The author even goes as far as claiming that Ayers is somehow rehabilitated !!!
(but only in Chicago of course !)

Obama and ’60s Bomber: A Look Into Crossed Paths


There's a ton of info on Ayers / Dohrn / Obama / Michelle connections.
Most is not mere speculation as many will argue.

1. From Dreams From My Father and other sources we know that Obama was interested in South Africa divestment in the early 80's. For example, he had a moment of awakening at Occidental College when he gave a brief but well-received speech to kick off an anti-apartheid demonstration. Other sources indicate he maintained that interest while at Columbia.

2. A major focal point of the anti-apartheid movement in the fall of 1981 was the Springboks rugby tour - they were an integrated South African rugby team on a "goodwill" tour of the US, creating controversy and drawing protests everywhere. Some of the protests were violent, including one at John F. Kennedy Airport (from whence the team departed, I believe), and bombs were exploded.

These are just dots and it may be impossible to connect them, but we have Barack Obama at Columbia working on South African divestment (as were many peaceful protestors) while other radical elements with a Weather Underground flavor are setting bombs, killing cops, and working on South African divestment. As a bonus, Bill Ayers is studying at Bank Street College a quarter mile from Columbia towards his Masters in Education and Kathy Boudin, one of the Brinks getaway drivers, was working at a progressive Upper West Side School. Eventually Bill Ayers and Bernardine Dohrn raised Kathy's child while she was in jail, so it seems a fair guess that they were close.

A small, small world in which Obama never met any of these people despite their shared passion for justice in South Africa. Never heard them speak at a rally, never heard anyone describe the Weather Underground to him, and felt comfortable assuming that Bill Ayers had been rehabilitated by 1995. In fact, a world so small that Obama won't talk about it now.


Obama’s Connections to the violent SDS: Bernardine Dohrn (from May 14, 2012)

BERNARDINE DOHRN: She outranked her husband Ayers in the early SDS hierarchy, serving as one of 10 National Committee members and the only woman. Dohrn, Ayers and Jeff Jones created the splinter Weather Underground where an FBI informant testified the trio was willing to kill the 25 million Americans they expected to resist their planned overthrow of U.S. capitalism. Then-FBI chief J. Edgar Hoover called Dohrn “the most dangerous woman in America.”

Dohrn and Michelle Obama both worked at Chicago’s Sidley Austin law firm in 1988. Barack Obama, Dohrn and Ayers appeared together at several community events, including one organized by Mrs. Obama in her post at the University of Chicago. Today, Dohrn, an associate professor of law at Northwestern University and founder of its Children and Family Justice Center, supports the 150 “New SDS” chapters in U.S. high schools, colleges and universities, writing, “This is the power and the inspiration of a vast, Left umbrella network with variety and vigor.”


this is only the tip of the iceberg.
more to follow.

btw, Michelle, while at that law firm, was assigned to be Obama's "Mentor" when he came there.
One guess who made that "assignment".

The Ayers/Dohrn Weather Underground never went out of business either.


Guess what? I spent the 4th of July evening with star Democrat Barack Obama! Actually, that's a lie. Obama was at a barbecue at the house next door (given by a law professor who is a former member of the Weather Underground) and we saw him over the fence at our barbecue. Well, the others did. It had started raining and he had gone inside be the time I got there. Nevertheless.


Translation...there was a black guy at the BBQ next door....or at least that's what some people told me that were peeking through the fence and the rain in the backyard.