executed by shabiha members in a village near Qusair, in the west of the country, they said.

Correspondents say the video shows a group of bodies with hideous injuries.

The UN Human Rights Council has meanwhile begun an emergency session to discuss the violence in Syria.

posted on Jun, 1 2012 @ 05:39 AM
link
Once again another supposed Massacre happened in Sryia this time in a village near Qusair, in the west of the country but however i find the timing rather more questionable.

( reported ahead of UN meeting )
Do you honestly think Assad would do something like this ahead of a UN meeting? i highly dont think so.

Don't forget a few ago, America,Britain, all went to the Friends of Sryia conference meeting, where they have could discussed on how to escalate the conflict in Sryia.

Which is why you dont see any leaked videos been released to public on about there meetings.

So i am not surprised that another massacre happened right after the one that took place on May 25 or May 24.

If you look at the BBC news article, they posted an image from the apperent video of these Rebel activists.

In which it states.

And once again the bodies are been covered so quick without an investigation, just like in Houla this is getting pretty much to a point where there could be an Intervention.

The true aim of Washington planners is not al-Qaeda,or hunting terrorist groups but remains to target “Iran, as well as the oil and military interests of Russia and China in the region.

And it is rebirth of recreating the ottoman empire through by proxy.

Once again i am not failing for the massacre propaganda. Just so the dead journalism can win me over by getting me emotional.


Do not believe the lies people
We have been told the same things before by these people and they have lied many times.
They are not presenting legitimate evidence to back up their claims.
Syria is looking exactly like Libya and it is very likely that they have been invaded by western back terrorist groups.

Wait for proper evidence before you make up your mind but do not allow them to invade another country and kill millions of innocent people again.

The Syrian government should not be found guilty before trial, let alone before any evidence has been presented. 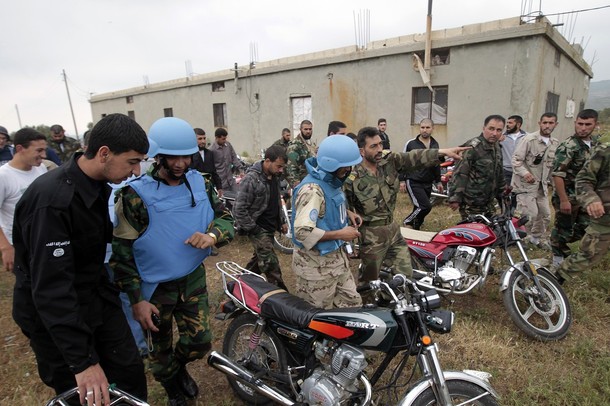 A man wearing a black shirt bearing an Al-Qaeda flag (L) speaks with a UN observer as monitors meet with rebels and civilians in the village of Azzara in the province of Homs on May 4, 2012. The Syrian Observatory for Human Rights says the unrest in Syria has killed more than 11,000 people since an anti-regime uprising broke out in March last year.


The body language in that valuable picture you posted is priceless..

Notice the guy above the second motorcycle in the back?
Notice the (one alqueda haha) guy?

This is so cheesy, that if it was a game I wouldn't buy it, but the graphics do look life like...

Originally posted by HumanCondition
Do not believe the lies people
.


And Yugoslavia, liberals it was Clinton who bombed Serbia and attacked Yugoslavia, just look at how great the ex Yugoslavia is doing now?

Why its failing apart.

You don't remember reagan selling chemical weapons to saddam? God your life must be so simple...
How do you think ahmadenijad got into power? Wasn't there a democracy in Iran at some point? Maybe some terrorists came in and overthrew the leader and installed a radical type guy in there?

Gaddafi? You're being serious? He was murdered for trying to unite Africa. A united Africa and trading oil in non US dollars is a death sentence.

Bill O'Rilley didn't tell you? Liberal means someone who spends and likes to spend money. It doesn't mean everyone you ignorantly hate.

By the way, the conservative thing to do is to SAVE bombs, and save lives. conserve... Like conserve the environment, ie. don't waste. I wish you were actually a conservative, then you wouldn't be wasting my time.
god...
edit on 6/1/2012 by Dustytoad because: (no reason given)

much nicer than Vader Black,,,lol

ohh u asked who was in Control,,,,
whoever the Bikes are Reg. too.

Some of the replies in this thread are just ridiculous in my opinion.

People are dying. I realize emotions are running high but stop with the lies and deceit simply because it may expose your version of events as a house of cards. [Whichever side that may be] The real question should be,

Who is doing the killings and why?

Not simply sit back and deny the whole thing happened.


Not everything is a US or Israeli false flag operation or a CIA plot.

Why is it so hard to believe Assad is a tyrannical dictator who will crush opposition (like many have done before him)?

There are bad people in the world who aren't Israeli or America...Just Sayin'!


Other agencies are reporting that it was the 'rebel' terrorists who did all the killings and staging. No matter what side is true if we deposed Assad who will take his place? Some jihadi, or some violent thug?

Are we in the business of regime change? Seems like we are using the story of killing children to put in a new dictator that only we would like. Is Libya any better now?

We installed various dictators around the world, keep them in power and they kill children and yet we do not do anything about it because we installed them and let them have power.

What if it is the Syrian Government? Should your outlined fears justify burying the truth? If it's the rebels? Then it should be exposed.

Either way, pretending it NEVER happened is just ignorant

posted on Jun, 1 2012 @ 12:28 PM
link
Critical thinking. Looking at facts, without emotional or personal bias and coming to a conclusion.

A typical day on ATS where a persons bias manipulates some data until it fits in to a preconceived notion.

Anyone wanna guess where we are on this thread?

I'm not a liberal, I vote 'R' Actually you are generalizing. Now the people who defend these three mentioned people are the ones who do not want to be bombed by NATO to kill more women and children, hey but its ok to kill women and children as long as you drop a bomb from the sky because its Amerika, F' Yea

Originally posted by THE_PROFESSIONAL
reply to post by SLAYER69


Note: I had to stop my initial reply to you and go back and quote you so as to make sure I read it right...

I'm against killing ANY civilians however and wherever it is done. Collateral or not. You really are twisted sometimes in your logic and demonstrate a total lack of empathy and sympathy
edit on 1-6-2012 by SLAYER69 because: (no reason given)


No one's championing any side here.

Rather, you are jumping to conclusions based on your own ignorance.

Let's see, another "Friend of Israel"?

Just how much better are you?

90% of the Syrians voted for Assad and he is doing what his people wanted that is to get rid of these terrorists. The collateral damage is bad and regrettable.

I am not saying it is justified because the west kills people in different countries. I am saying it is justified because it is an internal conflict. It would not be justified if Syrian killed civilians in another country. The citizens of syria want these terrorists out of th country. If NATO wants a quick end to this conflict how about they stop funding the terrorists and the conflict will be over quick and their will be no more civilian casualties.

I am not saying that civilian causilites are justified, just a regrettable side effect.