This is a video montage from FOX, so yea, that may bias you already but its worth watching. Obama saying what he'll do during his campaign in 2008 and the 'results' of his administrations policies

posted on Jun, 1 2012 @ 01:28 AM
link
It's false, they aren't even using the correct numbers.
For example, in July of 2008, gas was 4.11 per gallon, higher than it is now, in fact, at an all time high....EVER. Then it took a nose dive, just in time for the elections of course, but it didn't help much, now did it?
The national debt took a 72% increase under bush. Granted, the whole number is higher now, but the percent increase was much higher under bush.
In fact, I don't see a single figure that is correct and anyone with the ability to do an internet search can quickly verify that.

Not taking up for Obama, I think Hillary would have done a much better job, but the guy really is working hard to clean up bush's mess. ... and making messes of his own, but nothing compared to what bush/cheney left for him to deal with.
edit on 1-6-2012 by PurpleChiten because: (no reason given)

CLAIM: The Debt Has Increased By $5.7 Trillion Due To Obama's Policies

REALITY: The Debt Increase Over Obama's Term Is Almost Entirely Due To Bush Administration Policies

Fox & Friends Ad Suggests Obama Responsible For Increase In Debt. The video aired on the May 30 edition of Fox & Friends included clips of Obama saying that he "pledge[d] to cut the deficit in half by the end of [his] first term in office" and that "all of us need to act more responsibly on behalf of a better economic future." Following the statements, Fox & Friends aired this graphic showing the increase in federal debt over the course of the Obama administration:.....


REALITY: the claims are true !! very true !!
If "Bush did it", then MediaMatters needs to explain THIS:

Why did Bush & Co. work hard to get to 4.4% unemployment ?
Why would they do that and then blow the whole deal ?
Answer: maybe He had a gun to his head.
Remember .... Congress was infiltrated by Ultra Liberals starting in January 2007 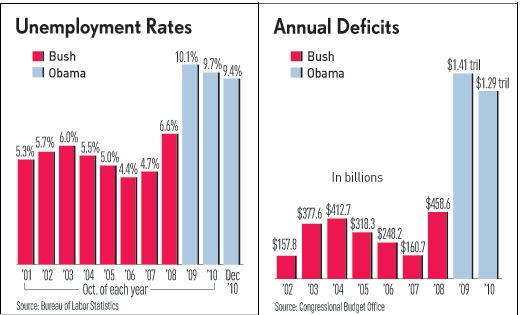 
This video received a lot of heat, it's despicable that a supposed "news organization" would produce and air what is obviously an anti-obama video - it's not their place to do so. Unbiased my ass.

posted on Jun, 1 2012 @ 03:19 AM
link
One thing I never understood with Obama is that he said waterboarding and torture was wrong and that is not who we are.

So, instead we kill them with drones. Even Americans who are not given due process. What is worse waterboarding one al qaeda suspect to get usable intelligence, or killing a supposed terrorist along with any civilians or women and children that may be riding with them or in the immediate area.

The man is an incompetent idiot and is so full of it I don't even want to get serious,

This administration is a complete farce!

Which you don't get. You do not get reliable, usable intelligence from torture. It doesn't happen, all you get is what the person whom you are torturing thinks you want to hear to get you to stop torturing them.

or killing a supposed terrorist along with any civilians or women and children that may be riding with them or in the immediate area.

That's war for ya. Sorry if my bleeding heart doesn't bleed for collateral damage. Maybe, women and children shouldn't be hanging around with terrorists. Maybe that will wake up other women in the region to take off from their terrorist husbands. Maybe it will empower women in the area to say. "Hey, your a terrorist, and the US bombs the heck out of terrorists, and I don't want me or my children to be bombed, so, I'm gonna go stay with my non terrorist mother for a while so that when you get turned into pink goo I won't be around."

Maybe, and stay with me on this. Maybe, we should raise taxes on the wealthy so that they have to do something called WORK in order to become MORE wealthy. Maybe, if they have to do BUSINESS in order to make wealth instead of just getting tax break after tax break and basically get free money from the government, they will be forced to create jobs in order to be more productive and earn more money.

It's a thought I know, and neocons today have no clue, they just think that if you give the rich enough money they will somehow become full and spill over their wealth onto the middle class. It just doesn't work that way.