Did NASA "bomb" the moon to hide something?

Note: I'm writing a fictional short story for our ATS writers forum based on this idea and will be using the feedback and any other pertinent information for the storyline and/or premise...

Let's begin...
I was reviewing some older threads about the KAGUYA (SELENE) Japanese HD moon mission then clicked on a link that lead me to another thread about the "bombing of the moon" by NASA relatively soon after. First off, many were then and still do to this day complain that the Japanese agency hasn't released all they had recorded. I know there is a plethora of available photos [That's not what I'm getting at]

My question is this. Could JAXA and NASA have been involved in a cover up of something that has been known about on the moon since the Apollo era but was of no concern [since no other nation ventured manned landings] to the moon? I'm not talking about photographing or landing probes like the Russians have done but actually stepping foot on it's surface.

Could they have knowing full well that Russia and or China, with it's growing economy and space program. [ I wont go into how the Clinton administration turned a blind eye when China was caught red handed stealing sensitive US missile secrets then within a few short years their struggling space program started making advances in leaps and bounds] will eventually make manned trips to the moon?

Could they have tried to head off some discoveries on the moon? KAGUYA was crashed onto the moon then a short time later NASA crashed their own. Now I don't know where these two supposedly crashed but doesn't it seem odd that not one but two closely timed space crafts from Allied nations would within a very short amount of time crash two into the lunar surface?

How about this scenario...

NASA and TPTB knew of a certain [location/find/artifact/coldwar base] etc etc etc that was [explored/excavated/constructed] during the Apollo program or the supposedly secret space program that we have all heard about over the past few decades. Could JAXA have not only done the obvious HD recording of the lunar surface but also had been used to scout out the location to be "Sterilized of evidence" Now, Here is an image from Popular Science March 1970. 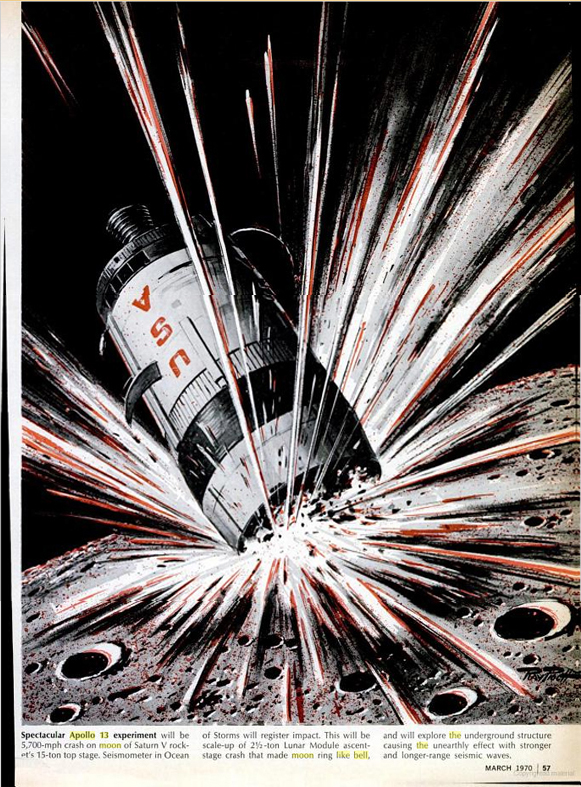 Notice the information written on the bottom? Apollo 13. I wonder if there is any correlation between that attempted "bombing" and their accident? Now, I know this is ATS and I probably will have a few well known ATS "Debunkers" riding to the rescue. So, before they come in and attempt their best to ruin my bowl of Cheerios I have to ask. How can we trust either JAXA or NASA and what they say unconditionally?

Yes it does makes more sense to me than saying the moon landings were "Faked".

posted on May, 26 2012 @ 12:40 AM
link
Ya sort of goes hand in hand with why we never when back offically that is
Still think they are hiding something up there


You cant trust any "organization" that isn't 100% compliant in giving away its secrets,for mankind's best interests.

That's the way I see it. First,you have to "believe' that their was something on the moon,that NASA didn't want anyone to see. Plausible,without any proof ? Sure. No one,but NASA or the Russians,had the capability of mapping it,with fine detail. Now,maybe NASA "found" something it didn't want ANYONE to see,or EVER get a hold of. Highly speculative,but plausible,in the age of one upping .......
edit on 26-5-2012 by sonnny1 because: (no reason given)

posted on May, 26 2012 @ 12:58 AM
link
I think you are on to something. I've always thought, if NASA doesn't have the shuttles to conduct space walks or whatever else they want to do, and now they have to rely on their allies in order to send satellites or what not to space, wouldn't their allied have the same ideologies, strategies as NASA?

Why would NASA trust another country for their space programs if those countries weren't in on secrets and cover ups?

I wish had that kind of cash and send my own team (with me on it) to the moon and make it a camping ground for a whole month just to find out what's on the other side of the moon!

posted on May, 26 2012 @ 01:03 AM
link
Why not? Do we actually know about all the space missions? It is plausible that some top secret mission happened and they were covering it up.... Just the initial mission sounded odd.

The planned October 9, 2009 bombing of the moon by a NASA orbiter that will bomb the moon with a 2-ton kinetic weapon to create a 5 mile wide deep crater as an alleged water-seeking and lunar colonization experiment, is contrary to space law prohibiting environmental modification of celestial bodies. The NASA moon bombing, a component of the LCROSS mission, may also trigger conflict with known extraterrestrial civilizations on the moon as reported on the moon in witnessed statements by U.S. astronauts Buzz Aldrin and Neil Armstrong, and in witnessed statements to NSA (National Security Agency) photos and documents regarding an extraterrestrial base on the dark side of the moon.

If they were willing to violate space law to bomb the moon, then they must have had an important reason to do it in they're minds. Who knows maybe they really did bomb an extraterrestrial civilization on the moon, but thats HIGHLY speculative.


I don't think they were bombing a Civilization but maybe an ancient spacecraft or ruined alien base after they stripped it
edit on 26-5-2012 by The-Hammer because: (no reason given)


Yeah...if the bombing of the moon had anything to do with ET's in any capacity, it would probably be to destroy structures of some kind or artifacts.

posted on May, 26 2012 @ 01:25 AM
link
If it was an artifact, I would think it would be too valuable to bomb. If it can't be removed, I would think (assuming they elect NOT to sabotage China's or whoever else space program) they would bring them into the fold and say "Hey, before you go...umm, yeah, you're going to find a little something something when you get up there. We've been meaning to tell you about it for a while now, but...you know, sh*t happens and then Whitney Houston died and our plate was a little full. But here's what we know. OK then. Have fun, and we'll be watching. Peace out, homies. Oh, and we expect a full report when you return. Laters."

To which China would reply with a phrase that begins with 'F' and ends in 'U.'

I don't know. I would hope that if it was something that didn't belong to us or any other Earth nation, they wouldn't bomb it into oblivion.

NASA Document Recomends Space-Faring agencies to stay away from certain sites on the moon
edit on 26-5-2012 by SLAYER69 because: (no reason given)


They didn't really "Bomb" the moon with explosives [So they say] but rather "Crashed" into it. ATS was full of threads about "NASA bombing the moon" at the time so I just used the phrase. Remember, once upon a time when another crash occurred the moon "Ran like a bell" for a few hours :cool

Specific indicators of U.S. human, human-robotic lunar presence, including footprints, rover tracks, etc., although not all anthropogenic indicators are protected as identified in the recommendations.


but rather "Crashed" into it.

Correct.
I'd forgotten about that whole thing until I saw your post. Old age.
Still It would be interesting to look over images the area before
it was pulverized into a 5 mile wide crater.


I'm pretty sure Jim or Phage would know. Maybe they'll play nice and drop us some info. But, I'll be skeptical about the locations. I'd also love to see some HD images of the impact sites before and after.
edit on 26-5-2012 by SLAYER69 because: (no reason given)

NASA is basically saying it doesn't want its Historical "importance" its "footstep" of reaching the moon,infringed upon . Understandable. I wouldn't want ANY country tramping around such a lofty endeavour America had undertook,its pieces of history,its Flag,its footsteps,like explorers have done to the Titanic site. Some things should be left alone,as significant as it was back then,as it still is now. The Moon is big enough for many footsteps to be placed on it. To any country,willing to make the endeavour ? Pick your OWN spot. The cost of putting man,anywhere in our solar system,is astronomical. The Dangers also. The moon landings,for all its worth,is still a shining example,of one of mans,greatest achievements. One of Americas greatest achievements. To have it sullied by Chinese,Japaneses,or even Russian footsteps, would be a disservice to what America,had done for the World.

Still.......I believe that there is something on the Moon. Something America might know about. Something the Russians,and those who sent probes know about. Spacecraft? Something with the moon itself ? Who the hell knows. I don't have proof,but its definitely one of the reasons I joined up on ATS.

You cant trust any "organization" that isn't 100% compliant in giving away its secrets,for mankind's best interests.

I think that this position is demonstrative as very alienated view of the world we live in. I too dislike secrets, especially those that are kept from me and I would subscribe to your view if you restricted the knowing to those that pay for the "organization" working and restrict the secret to those of a non physical destructive nature (that does not cover any topic that those managing the organizations would claim to mentally or morally affect the general population, like for instance an alien answer to the UFO phenomena).

But imagine that the Manhattan project findings had been made public from the onset (imagine a world where the Russians had no got a leg up on the knowledge to develop the atomic power and bomb), even with all the failing of the USA and its system we would have been in a very different reality. Even the Korean War would never occurred...

Of course that the better option could have been delaying or internationalized (same result) the pursue of the atomic power (much like Albert Einstein argued).

There are some secrets that are just too dangerous to become public, even "free" energy is a two edged sword more dangerous that the realization that we had been infiltrated by an alien civilization.

While we humans remain divided there is no greater good archived by permitting full transparency and access to dangerous technologies. See the discussion about the suppression of the flu study recently U.S. call to suppress information about mutant man-made superflu is ‘censorship’, it is a very extremely difficult gray zone to navigate that requires pondering the risks (that at times aren't all understood) and the benefits. There are good reasons for having "some" secrets, even if we all should fight for a world that would make it unnecessary.

Actually with this scenario,
there could of been a war on the moon
between who colonizes it first.
The jaxa project already had people
setting up a colony, and somehow this
*crash* had to secure the moon from
kazmakazie maniacs!!


Well there have been 13 spacecraft that have impacted the moon since 1959.

The latest impactor from NASA had the LRO watching it as it occurred...