well... WTH is that @ 2:36 thru 2:50?? solar flare? reflection?? broken camera (those are the 3 blanket explanations just as well as for donuts ufo's and other anomalies)

this is NOT the 'tiny UFO' Solar Reaquisition image NASA debunked a few days ago, this is some huge newer UFO, it appears:

apparently lots of people have been reporting seeing strange objects near the sun even with the naked eye in the past 24 hrs esp - wonder what it will look like in 10 days on may 20th - annular eclipse! (moon visible directly between us and the sun - which will turn from circle to crescent to covered by a darker moon except for a fiery bright ring by sunset. no telling what people will see next to the sun - where chemtrails havent smothered our view

Any links, sources, pictures or videos??

where chemtrails havent smothered our view

I know in my tiny little corner of the world here in NE Ohio, anytime there is going to be some sort of lunar, solar, celestial, etc. event, they make sure to lay the chemtrails on plenty thick.

Because in my tiny little corner, I have never ever seen a contrail in almost 30 years...

posted on May, 10 2012 @ 08:54 PM
link
I didn't see anything near the sun this morning, I was waiting for the bus with my son and took the iPad out with me, the sun was very bright and in my eyes, was trying to shield me eyes and I took this picture of it by accident LOL, anyway it's just the normal sun: 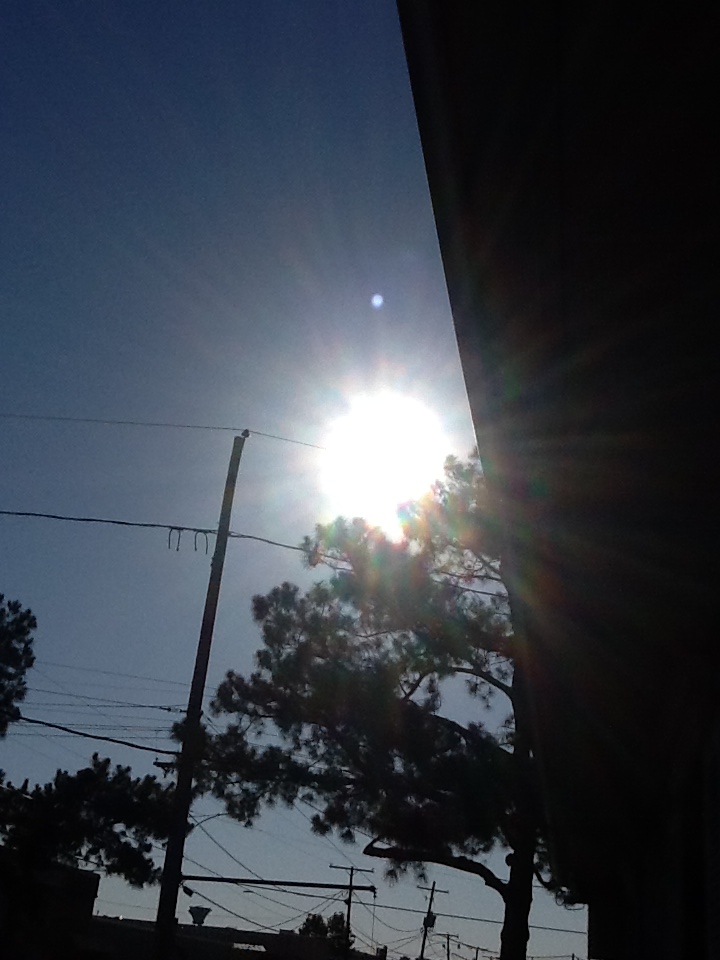 posted on May, 10 2012 @ 08:58 PM
link
Lol, if I remember correctly; I remember a thread a few days back talked about some guy making a prediction that Nibru would be visible on the 9th of May...

This person was known quite well for his failed predictions apparently. I don't know. But that's the first thing I thought of upon reading this thread.


You see, I ask because there have been A LOT of people photographing the sun the last few days, what with the giant sunspot that's visible to the naked eye and all...

And yet none of these people, who actually know how to use their cameras managed to see anything near the sun...

This morning the sight of the majestic Sunspot AR 1476 was great as the Sun was rising alogside the Basilica of Superga!

The sky was hazy and a bit cloudy today. I waited for a few minutes before sunset to try to image the sun hoping to get a glimpse of AR 1476. My patience was rewarded though only for brief moments before and during the sunset.

Huge sunspot AR1476 continues to present a magnificent spectacle to solar observers. I imaged AR1476 at sunrise this morning in Quezon City, Philippines.

posted on May, 10 2012 @ 09:08 PM
link
interesting, a nakedly visible sunspot on the sun
vs
a UFO near(not superimposed on top from our angle of view) the sun

In Greek mythology, Icarus (the Latin spelling, conventionally adopted in ... Daedalus fashioned two pairs of wings out of wax and feathers for himself and his ...

JibbyJedi
+8 more
posted on May, 10 2012 @ 09:11 PM
link
Can you find any videos with more ridiculous soundtracks?
Cuz I got a fever, and the only prescription, is more techno in my UFO videos!

posted on May, 10 2012 @ 09:11 PM
link
lets try to put this "object" near the sun into a certain perspective
considering they say that sunspot is about 4 earths large,.
and that "object" is about half the size of the sunspot,.. um a ship bigger than earth?
no

Nothing here but the usual.
edit on 5/10/12 by Evildead because: (no reason given)

Originally posted by WhoDat09
I didn't see anything near the sun this morning, I was waiting for the bus with my son and took the iPad out with me, the sun was very bright and in my eyes, was trying to shield me eyes and I took this picture of it by accident LOL, anyway it's just the normal sun:

Hi who,
Oh you didn't??
what is that bright round white thing at 12 oclock high?
looks like one of your eyes to me. lol
joshin ljb

Originally posted by Evildead
Hmmm. Ok Phage, anything to debunk here? I'd really like your take on these videos and the ISS commenting on what they're seeing. Are they talking about the bokeh from the other threads or something completely different. Learn me some astrophysics!

yeah, Phage or even Phagette if u guy/gals get a change let us know what we're seein @ 2:36:

solar flare? reflection?? broken camera (those are the 3 blanket explanations just as well as for donuts ufo's and other anomalies)


LOL nope not an eye, what you see here was in the pic... LOL I was holding the iPad up shielding the sun, and musta opened the camera, looks like the sun to me.... along with some kinda camera effect, I guess cause the sun is so bright!

here are the other two pictures I took:

I've been hearing now for 8 months how there is supposed to be something coming at us from "behind" the Sun. Some also say 90 degree off plane and approaching Earth from what we consider South. In all this talk though, I never heard reports from the millions upon millions pf Stargazers with more than a Kmart Telescope. I never hear much from the many thousands around the world with money for decent home equipment and can see MUCH more than they'd have to, for clear pics of anything like this.

In example...Spaceweather had a shot earlier this year of the Sun's surface that was so clear it was spooky. It's one of those shots where you can see the tendrils of Plasma or whatever that is on the surface, very clearly. I swear it looks like a ball of worms at times in that resolution.

The comment....indicated the source as a well supplied amateur with better than average back patio equipment.

So............ How is it all these very serious people aren't also seeing it and raising 10 kinds of warning? As a side note, I've always wondered how anything can be behind the Sun for any length of time?? Given that we and everything else in the Universe is in constant and endless motion relating to everything else...wouldn't something heading "right at us" actually appear to be heading off in some other direction until the end??

Someone correct me if wrong....but it would have to be heading at the point in space Earth WILL someday occupy and nothing relating to where we are right now, right?

Originally posted by kawika
reply to post by JibbyJedi


I checked out your suggested soundtrack, added it to my "favorites" and will surely have fun with it many times in the future.
Thanks

posted on May, 10 2012 @ 09:32 PM
link
I fail to see any thing really strange in any of those videos or photos. Its always the same things.
Sensor Artifacts, Cosmic Rays or Odd shaped 'globs' of coronal material seem to fit almost every video that comes out with claims of UFO's.
When it comes to the average amateur astronomer, the below sums it up.


none of these people, who actually know how to use their cameras managed to see anything near the sun


Maybe one day a real alien space craft will show up next to the sun, but so far, we are seeing nothing more than natural and expected phenomenon.
Awesome pictures of the sun spot, though. Star for those. I think Mr. Chad could use a couple more
TXML