This discovery is extraordinary as it is the first time that shrines from the time of early biblical kings were uncovered. Because these shrines pre-date the construction of Solomon's temple in Jerusalem by 30 to 40 years, they provide the first physical evidence of a cult in the time of King David, with significant implications for the fields of archaeology, history, biblical and religion studies.


The biblical tradition presents the people of Israel as conducting a cult different from all other nations of the ancient Near East by being monotheistic and an-iconic (banning human or animal figures). However, it is not clear when these practices were formulated, if indeed during the time of the monarchy (10-6th centuries BC), or only later, in the Persian or Hellenistic eras.


More evidence of the early Israelites and the “cult” of YHWH, as commonly called. This is for the first time evidence of the existence of a kingdom in or most likely under King David. Archaeological layers in Jerusalem have failed to yield much evidence for David so far, so I’m absolutely ecstatic over this news.

As most of you know, what precipitated the destruction of Israel were sites like Khirbet Qeiyafa and worship outside of the main temple as commanded in Deuteronomy 12:5. The level of transgression chronicled in the Bible during the early monarchy periods is completely accurate. David wasn’t a mythological figure or lesser leader, another slap to apologists.

posted on May, 10 2012 @ 08:06 PM
link
I read this just this evening! I think it's absolutely fantastic!! We really live in exciting times! Well, scarey ones too, but I love this about King David's era. Deep down in my heart would love to know what he looked like. Maybe someday we will. Won't hold my breath, after all they've never found Alexander's resting place.
edit on 10-5-2012 by Myrtales Instinct because: (no reason given)


Right? The present age is so exciting. I love seeing new biblical disoveries. I have faith that more big ones are coming very soon.!

Archaeological layers in Jerusalem have failed to yield much evidence for David so far, so I’m absolutely ecstatic over this news.

Thats because the old city is buried 30 feet underground beneath 30 feet of rubble and thats just from the Roman era. Those ancient cities were destroyed and rebuilt many times, there's no telling how far down passed 30 feet you'd have to dig to find evidence of him but some archeaologists did find hints to his house that was built.

Unfortunately modernday people are living ontop of a giant archeaological site and further evidence of him will likely have to be looked for outside the city for the obvious reason that you can;t just evict everyone out of Old Jerusalem and then blow up their homes to dig for ancient israeli artifacts. 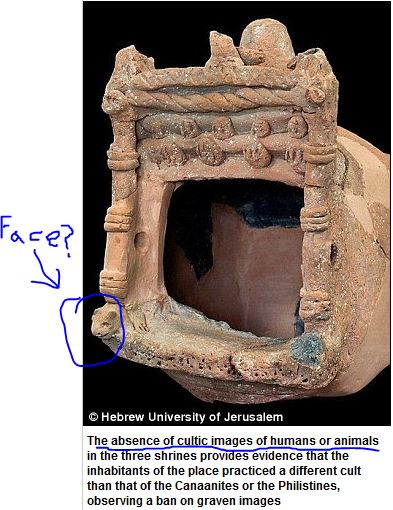 
Yep, mmhmm no graven images. The image you posted is a a pottery piece that's a scale representation of the entrance to Solomon's temple, as purported by one of the dig archaeologists (I disagree because the site predates The First Temple Period about 200 years). The two pillars on the side prominently featurED two guardian lions. I do not think that this necessarily invalidates the previous, that no graven images of animals had been found. After all, this is the only known artifact featuring an animal, and the site has been thoroughly excavated for five years. It's a difficult thing to explain.

My theory is that, the lions are symbols for Israel and Judah. The artifact features two guardian lions at the base of the pillars that lead to the shrine. This symbology, up to the settlement of the city had been used for many years by the Jews, because in Genesis Jacob refers to his son Judah as a young lion. Secondly, King David was the strongest and most famous king of the very newly united two kingdoms. Khirbet Qeiyafa's close proximity to Jerusalem is evidence of two simultaneously thriving cities. The lions represent the two kingdoms.
edit on 10-5-2012 by CaptainNemo because: (no reason given)

Interesting site dig.
In the article text, there are lions mentioned.


The clay shrine is decorated with an elaborate façade, including two guardian lions, two pillars, a main door, beams of the roof, folded textile and three birds standing on the roof. Two of these elements are described in Solomon's Temple: the two pillars (Yachin and Boaz) and the textile (Parochet).

I have two questions.
What was put in these shrine objects? If not statuettes, then what?
Do the lions on the altars not contradict the claim of a lack of graven images?

(1) 'Cultic images of humans or animals'

The article worded it poorly. What's being observed at the site is aniconism. Objects symbolic, but not depicting of a deity are allowed. As I mentioned in my above post, the two lions seem to be symbolic of the two kingdoms, Judah Israel.

(2) So far, with this site being really the only one of it's kind discovered to date, it's very difficult to say what would be in the shrine. The Bible says the Israelites continuously violated the law to worship in one place, the place built to house the ark; the temple or the tabernacle. The Bible very minutely details these failures, there were shrines in Ber-sheeba, Jerusalem and other places. Gideon and Saul are also described as constructing shrines, but there's nothing ever said about what was in them.

Most likely the absence of anything in the shrines and the Bible's detailing of the shrines is correct. I would go so far as to say that maybe (slight chance) if anything, an altar was present, but currently there's no evidence of that outside of the temple in Jerusalem. Most of the priests daily activities involved intensive prayer, reading and writing.
edit on 11-5-2012 by CaptainNemo because: (no reason given)