If the world ends on Dec. 21, 2012 — as some believe the Maya predicted — that leaves plenty of opportunity to see a new exhibit that examines the civilization's ancient kingdoms, intricate calendar systems and current culture. 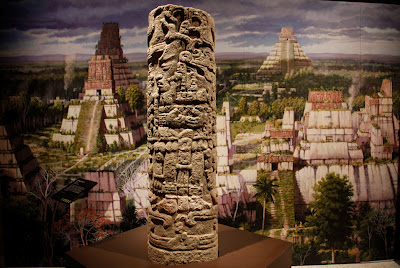 The stone Copan Stela 11 is shown at the Maya 2012: Lords of Time exhibit at the University of Pennsylvania Museum of Archaeology and Anthropology in Philadelphia.


Experts at the Penn Museum in Philadelphia apparently give little credence to the apocalypse myth, considering the show runs through early 2013. But they say the legend, which has been perpetuated in pop culture through disaster movies and sensational tabloid headlines, offers a chance to engage people about ancient and modern Maya society. 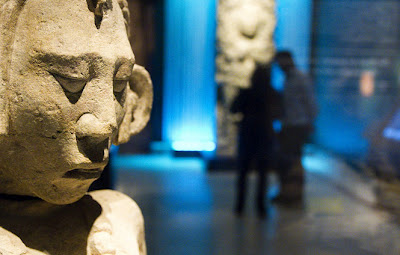 The show also uses interactive displays to explain the culture's glyph writing and sophisticated timetables. The upshot is that while it's human nature to seek ancient insight into the current world, people should not interpret the Maya calendar as predicting a cataclysmic event. "It's just a turn of a cycle,"

As early astronomers, the Maya devised various types of calendars by observing celestial movements. Their "Long Count" calendar begins in 3114 B.C. and marks time in roughly 394-year periods known as baktuns. Thirteen was a sacred number for the Maya, and some scholars believe the 13th baktun ends on Dec. 21, 2012.

"The Maya say nothing," he said. "The Maya are very peaceful. They are not worried." 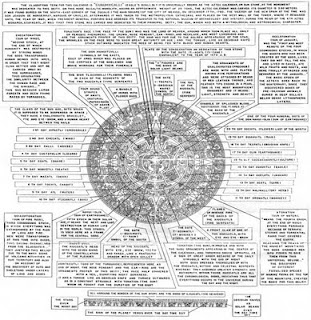 Link to this picture-expandable (which is PACKED FULL of Info and other related info): 2.bp.blogspot.com...

Well, regardless of what you think the Mayan calandar end means.... One thing for sure. This stuff is absolutely amazing!!!!

I have to say, since joining ATS, that the whole Mayan concept of things have taken over my previous desires to see the Giza Pyramids.

This exhibit will be a chance for me and the wife to see up close and personal-what we hope to do when we retire (head to the region to look around for ourselves). So just in case we never are able to make it... better than nothing.

Be sure to check out the last pic of the calendar, with the "break down" of the symbols etc. You can go to that site and expand the picture a lot! Enjoy~!
As far as I feel towards the end of the world etc: 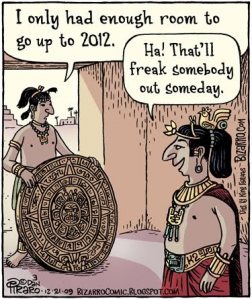 Thanks for the image describing the sunstone. Awesome info. I actually got a replica Aztec sunstone from Mexico, and it have always fascinated me.


Thank you for the head's up! I am only 10 minutes from Philly and can't beleive I haven't heard about it yet.

Penn museum is OK. Been there before. My favorite museum in Philly is the Mutter museum. Very suitable for fans of oddities, cadavers and death in general.

Regardless of what my belief is about the Mayan calendar, I will be checking this exhibit out. Thanks again!


Yes, I know what you say about the museums.

I go to Philly for work-a lot but the wife is bumming.... She hates Philly... (for the usual reason(s)-violence)

I sure hope me and the other ATS member are not the only ones going to this event.


Hi anon
Pretty awsome, is that exhibit done by that museum or is it a travelling exhibit, I hope it is.
I would love to see it if it makes it out to the west coast.


Im trying to find out. I put a phone call to Penn late today.

I should hear back, or will try again tomorrow.


Originally posted by Xcalibur254
reply to post by anon72


Just so there's no confusion:


The Long Count calendar used by many subsequent Mesoamerican civilizations, as well as the concept of zero, may have been devised by the Olmecs. Because the six artifacts with the earliest Long Count calendar dates were all discovered outside the immediate Maya homeland, it is likely that this calendar predated the Maya and was possibly the invention of the Olmecs. Indeed, three of these six artifacts were found within the Olmec heartland. But an argument against an Olmec origin is the fact that the Olmec civilization had ended by the 4th century BCE, several centuries before the earliest known Long Count date artifact.[62]

The Long Count calendar required the use of zero as a place-holder within its vigesimal (base-20) positional numeral system. A shell glyph –MAYA-g-num-0-inc-v1.svg – was used as a zero symbol for these Long Count dates, the second oldest of which, on Stela C at Tres Zapotes, has a date of 32 BCE. This is one of the earliest uses of the zero concept in history.[63] The back of Stela C from Tres Zapotes This is the second oldest Long Count date yet discovered. The numerals 7.16.6.16.18 translate to September 3, 32 BCE (Julian). The glyphs surrounding the date are one of the few surviving examples of Epi-Olmec script.[61] 
5,200 years ago, the world of the Maya ended, and so did their calendar. For the Maya, time was a series of cycles that would repeat. Their calendar always ended in a terrible event. A new calendar began which will end in December, 2012. The Maya never said that life on Earth would end, however in one of their Codex that was not destroyed by the Spaniards, in the Códice de Dresden –it contains an illustration with the picture of the Underworld or Xibalbá: on top, it has a representation of the flood. There are also warnings of disasters, end of a cycle and planets aligned.
"Evidence shows that around 5,200 years ago, solar output first dropped precipitously and then surged over a short period. It is this huge solar energy oscillation that Thompson believes may have triggered the climate change he sees in all those records. But more importantly, they believe it has happened at least once before, and the results were nearly catastrophic to emerging cultures at the time. He outlined his interpretations and fears at the annual meeting of the American Geophysical Union in San Francisco. A professor of geological sciences at Ohio State and a researcher with the Byrd Polar Research Center, Thompson points to markers in numerous records suggesting that the climate was altered suddenly some 5,200 years ago with severe impacts." Lonnie Thompson researchnews.osu.edu...
Email ThisBlogThis!Share to TwitterShare to Facebook

Originally posted by Xcalibur254
reply to post by anon72


I've been doing my own research on the sunstone and think I have its purpose. It is incredibly accurate at predicting earthquakes giving their location as well. It's quite simple really: for reasons we are only just starting to understand, the interaction between Jupiter, Saturn and the Earth causes seismic activity here on our planet. It is something to do with gravity sleeves which at certain times go out of kilter affecting not only the Earth but the sun as well. When Earth passes between Saturn and Jupiter we get high magnitude earthquakes. The last was 11 March 2011 - the Japanese tsunami. When Earth, Saturn and Jupiter "almost" form a right-angled triangle, again there are earthquakes. The declination of Jupiter and Saturn resolve into latitude and longitude components.

The sunstone seems to take the legwork out of doing nasty calculations. By simply taking an astronomy map of the planets on the ecliptic circle, placing the stone over the top and pointing the big arrow at the top towards the sun, you can read off the symbols at the points where Jupiter and Saturn lie. The Japanese tsunami registered as "flower/flourishing" and "water". The Kobe earthquake pointed to House(=earthquake) and Flint for purifying (=destructive). Count the little "fives" on the inside and the larger groups of ten on the outside to get the location: latitude is from the equator, longitude is from Mexico City.

So far I have reconstructed over 50 earthquakes flawlessly which seems pretty conclusive to me. Next I am going to look at storms like Katrina and Sandy as it seems to be able to do those too for the same reasons.

As I say, our science is only just starting to catch up and until it does nobody will take this seriously which is a shame because it could save lives. I'm not an Aztec "expert" so I doubt Mesoamerican academics will give it the time of day

Before I go, a couple of significant predictions: 7 August 2014, Northern Australia: "Total destruction evenly across the board" and 17 November 2014 in the S Pacific Ocean: "Total death/flood". Both will be more sizeable than the Sumatra Tsunami in 2004 which only got a "Raining Earthquake" description.