Will Paul win the Republican nomination?

posted on May, 6 2012 @ 09:49 PM
link
So what do you think?
Remove your emotional attachments to your favorite and review the facts.

Do you think he will win it or is it too far out of reach?

Is the system rigged so people like him cant win?

Or will he win the nomination to make the system seem democratic, but then loose the white house due to rigging etc..?


Yeah but there is still the possibility he will win the nomination to make the process seem democratic.

I understand they would never let him win the white house tho.

It's hard when you have such a high opinion of yourself. Give me a boost? I suppose it was a bit of a jerk move to say threads like this happen daily, and that they usually have more substance. 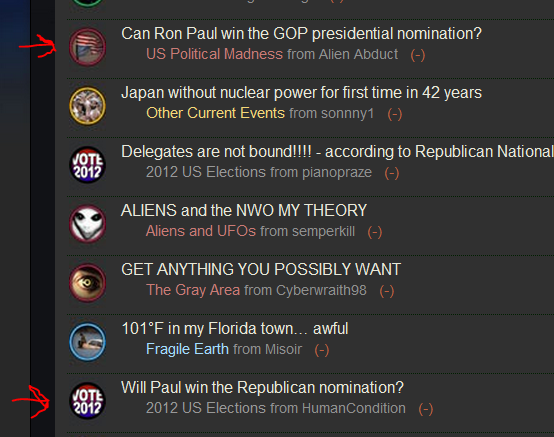 posted on May, 6 2012 @ 10:07 PM
link
Have asked this before but got no response so I'll ask again : how can he possibly win it? Doesn't Romney have a ridiculous amount more delegates or whatever it is he needs? And almost at the point where he's automatically the nomination?

And if so, why is this debate still going on? I could understand it months ago, but not now if Romney is so close.

I just want some information on where the hope for Ron Paul is coming from, because from what I've read (last was a huffington post article.) his chances have gone.

Originally posted by HumanCondition
reply to post by Domo1

I'd much rather Ron Paul got in, but even I think the threads are a bit crazy. Then again though he's won states (or whatever it is in your crazy political process.) today/yesterday so I can see why that's happened to a decent degree.
edit on 6-5-2012 by robhines because: added


See that's what I thought but I wasn't really sure how it all works and figured there may still be a chance.

I really was just looking for some clarification.


That's two of us then, somebody help with an explanation please!


I do. I also understand that there is a search function, and starting your own thread is not the only way to be heard. I don't mind new information about the guy, but the same question day in and day out is getting old. I've started Paul threads too, then I realized it's becoming a problem and stopped.


I may have misunderstood your point. Sorry. I just see so many people posting Ron Paul things and think the motivation is generally stars and flags/attention. Could he win? Not sure, don't think so even if everything lined up perfectly. Should he, I have mixed feelings. Will he, I don't believe so.

Well tough! Because we're making three a day until they close the Fed! [insert sarcasm]

I think three a day is a bit of an understatement! I appreciate the passion, but it really is getting a little weird. Ron Paul has a lot of wonderful points/qualities but I don't believe he could even begin to compete with Obama politically (sadly enough). Mittens isn't going to do much better, but maybe there is a chance. Then again I don't like Mittens, and he seems Obama-ish. This election is going to suck.


why do you think anyone outside TPTB have a say in the matter? they will select whatever puppet (potentially including Ron Paul just sayin) they want to be the current figurehead of the syndicate.


Could you please tell me who TPTB are, or at least who you think they are?


I'm sorry I'm ignorant, have yet to 'wake up', am a shill, a disinfo agent, a troll, an idiot, a sheep, a jerk, and what not. I forgot about the reptilian overlords.