Here's my tribute to these wonderful and beautiful animals.

The Oncilla (Leopardus tigrinus), also known as the Little Spotted Cat, Tigrillo, Cunaguaro or Tiger Cat, is a small spotted felid found in the tropical rainforests of Central and South America. It is a close relative of the Ocelot and the Margay, and has a rich ochre coat, spotted with black rosettes. The Oncilla is a nocturnal animal that hunts rodents and birds

It is considered as "vulnerable" in the IUCN Red list 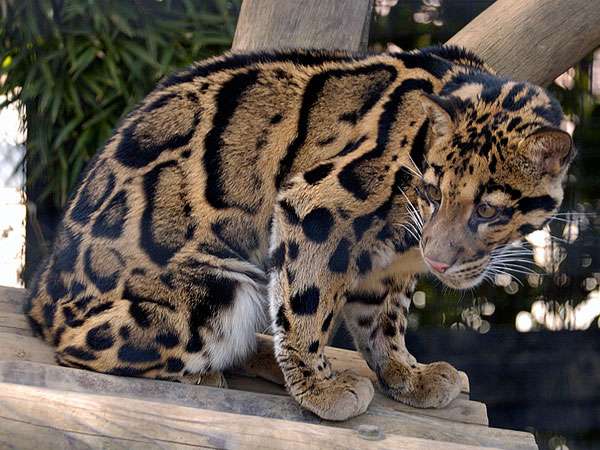 The clouded leopard (Neofelis nebulosa) is a felid found from the Himalayan foothills through mainland Southeast Asia into China, and has been classified as vulnerable in 2008 by IUCN. Its total population size is suspected to be fewer than 10,000 mature individuals, with a decreasing population trend and no single population numbering more than 1,000 adults

It is considered as "vulnerable" in the IUCN Red list 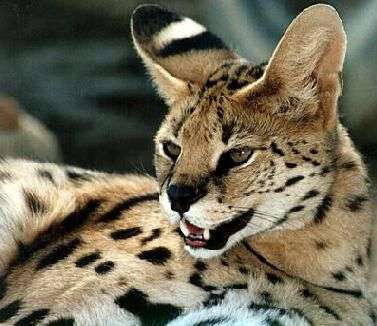 The serval, Leptailurus serval or Caracal serval, known in Afrikaans as Tierboskat, "tiger-forest-cat", is a medium-sized African wild cat. DNA studies have shown that the serval is closely related to the African golden cat and the caracal.

It is considered as "Least Concern" in the IUCN Red list 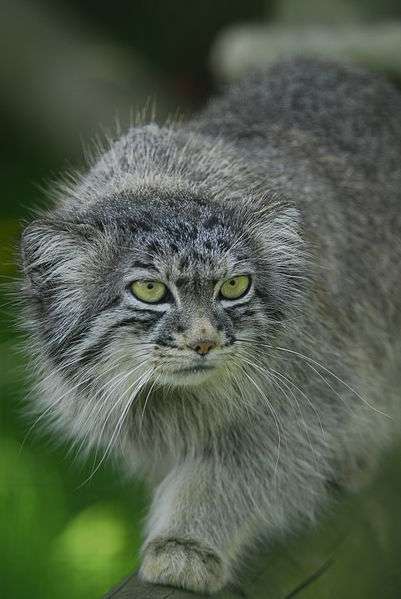 Pallas's cat (Otocolobus manul), also called the manul, is a small wild cat having a broad but patchy distribution in the grasslands and montane steppe of Central Asia. The species is negatively impacted by habitat degradation, prey base decline, and hunting, and has therefore been classified as Near Threatened by IUCN since 2002 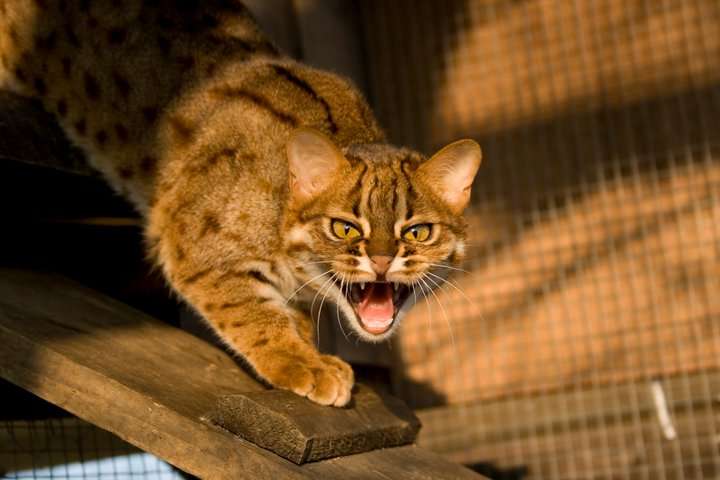 The rusty-spotted cat (Prionailurus rubiginosus) is the cat family's smallest member and found only in India and Sri Lanka. It has been listed as Vulnerable by IUCN in 2002 as the total effective population size is below 10,000 mature individuals, with a declining trend due to habitat loss, and no subpopulation containing more than 1,000 mature breeding individuals. 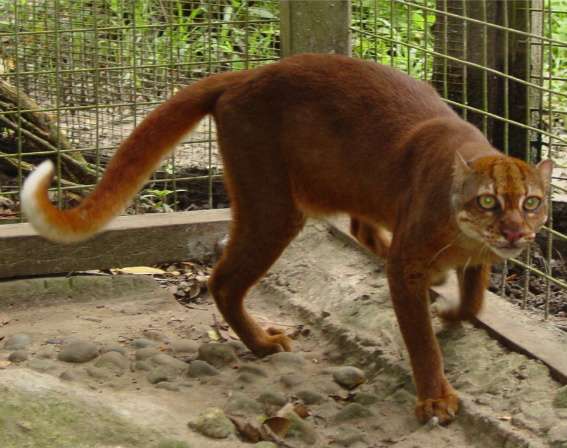 The bay cat (Pardofelis badia), also known as the Bornean cat, Bornean bay cat, or Bornean marbled cat, is a wild cat endemic to the island of Borneo that appears relatively rare compared to sympatric felids, based on the paucity of historical as well as recent records. In 2002, the IUCN classified the forest-dependent species as endangered because of a projected population decline by more than 20% by 2020 due to habitat loss. As of 2007, the effective population size was suspected to be below 2,500 mature individuals.

Bay cats have historically been recorded as rare and today seem to occur at relatively low density, even in pristine habitat 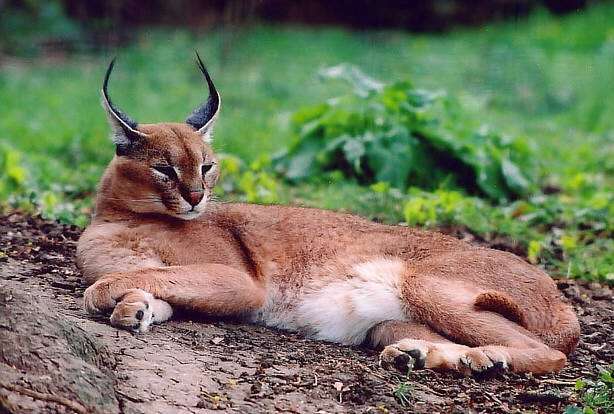 The caracal is a fiercely territorial medium-sized cat ranging over Western Asia, South Asia and Africa.

Although it has traditionally had the alternative names Persian Lynx, Egyptian Lynx and African Lynx, it is no longer considered to be an actual lynx. Instead, it is now believed to be closely related to the African golden cat and the serval. The caracal is classified as a small cat, yet is amongst the heaviest of all small cats, as well as the quickest, being nearly as fast as the serval. 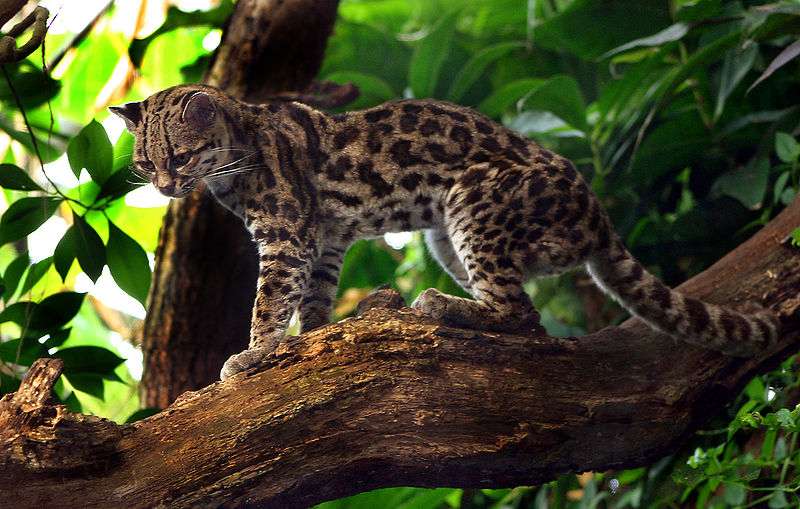 The Margay (Leopardus wiedii) is a spotted cat native to Middle and South America. Named for Prince Maximilian of Wied-Neuwied, it is a solitary and nocturnal animal that prefers remote sections of the rainforest. Although it was once believed to be vulnerable to extinction, the IUCN now lists it as "Near Threatened". It roams the rainforests from Mexico to Argentina. 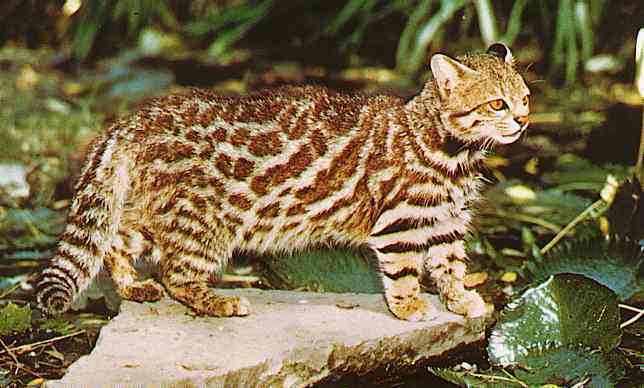 The Colocolo (Leopardus colocolo) is a small spotted and striped cat native to the west Andean slope in central and northern Chile. Until recently it included the more widespread Pampas Cat (L. pajeros) and Pantanal Cat (L. braccatus),[1] and some maintain these as subspecies of the Colocolo. Confusingly, when these are treated as subspecies of the Colocolo, the "combined" species is sometimes referred to as the Pampas Cat

The jaguarundi (Puma yagouaroundi) is a small-sized wild cat native to Central and South America. In 2002, the IUCN classified the jaguarundi as Least Concern as it is likely that no conservation units, with the probable exception of the mega-reserves of the Amazon basin could sustain long-term viable populations. It is probably extinct in Texas. Its presence in Uruguay is uncertain. 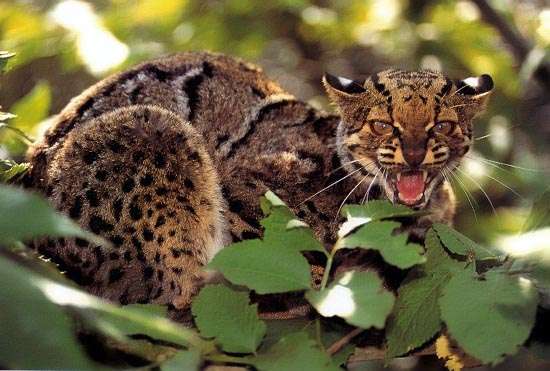 The marbled cat (Pardofelis marmorata) is a small wild cat of South and Southeast Asia. Since 2002 it has been listed as vulnerable by IUCN as it occurs at low densities, and its total effective population size is suspected to be fewer than 10,000 mature individuals, with no single population numbering more than 1,000.

The species was once considered to belong to the pantherine lineage of "big cats". Genetic analysis has shown that it is closely related with the Asian golden cat and the bay cat, all of which diverged from the other felids about 9.4 million years ago

Just to name a few.

posted on May, 5 2012 @ 11:42 AM
link
Wow, frankly I have never seen these anywhere and I watch a lot of discovery and animal planet. The bay cat looks like a monkey, nearly.


You know what mama says about bringing home strays.......


I'm not really a cat person (pet-wise), but, I really want that Oncille.
The Caracal is awesome too, I just wish it was big enough to ride.

Why does the bay cat look like a Lemur? It's fugly


Nice list; the Caracal is one of coolest looking cats I've ever seen.

But do you know of an African cat that has larger ears than the Caracal? I can't remember the name of it.


Now chickens are a pet I can get into....Not only are they awesome but there eggs are great to. Imagine if my chocolate lab could have me an omelet ready every morning....That would rock!!!!!

posted on May, 5 2012 @ 12:08 PM
link
The OP states that the Oncilla is a close relative of the Ocelot. My question is, does the Ocelot belong in this group?

Seems to look more like a Marbled Cat
edit on 5-5-2012 by Manhater because: (no reason given)

Originally posted by intrepid
The OP states that the Oncilla is a close relative of the Ocelot. My question is, does the Ocelot belong in this group?

To answer your question, yes, they both belong to the same Genus Leopardus group, but are different species.

But do you know of an African cat that has larger ears than the Caracal? I can't remember the name of it.


Aweome thread! I am a cat lover anyway and had never seen any of these breeds before. Thanks!

S&F for sharing such a wonderful gallery!

Cats are (in my opinion) the most complete, evolved land mammal. Fast and agile, about the only thing they can't do is fly.

They are quite some work.

Originally posted by redoubt
reply to post by elevenaugust

S&F for sharing such a wonderful gallery!

Cats are (in my opinion) the most complete, evolved land mammal. Fast and agile, about the only thing they can't do is fly.

They are quite some work.

Mine would always fly from the closet to the bed.

posted on May, 5 2012 @ 03:39 PM
link
I thought I knew about every wild cat there was until seeing this thread. Wow!!!!! I can't thank you enough for bringing these cats to our attention!

Captive Caracals (& Cheetahs too IIRC) returned to the wild in order to protect the SAAF from birdstrikes!
edit on 5-5-2012 by squarehead666 because: Relevance & Content