(CBS News) When the Obama campaign unveiled its fictional character Julia, officials hoped she might become a household name to show how the president's vision for the United States would benefit millions of Americans, especially women.

Instead, she is getting attention from Republicans who hope to use her to symbolize what they see as Mr. Obama's failures: An overreaching government.

This latest tidbit coming from CBS sheds some light on how this election is going to go. The Obama camp seemed to have come up with a good idea to portray his plans for the entire nation by depicting his fictional woman "Julia." However, soon the GOP got there hands on it and ripped it apart for everyone to see! Julia could be as fictional as the man in power himself. This is why Obama will LOSE the election! He has got nothing to run on, so he has to create made up scenarios. If only those pesky Republicans would go away!
edit on 4-5-2012 by jjf3rd77 because: (no reason given)
edit on Fri May 4 2012 by DontTreadOnMe because: IMPORTANT: Using Content From Other Websites on ATS


I think this quote is quite descriptive


"Obama is setting forward a vision contrary to the American tradition of self-sufficiency--a welfare state that runs from cradle to grave."

But I actually looked through the life of julia and it's mostly pitching the free health care. There is a little on education and small business stuff, but the kicker is when she is 67 and she collects social security... yeah f-in right.

Edit: on the actual life of juila flash thing, the FB "likes" says 26k. I wonder if those are real people or bots... or a lie all together.
Edit: interestingly enough that's 0.003% of the facebook population. A rousing success.... Maybe they should talk to those invisible children peps and get some dubstep in the campaign

posted on May, 4 2012 @ 08:26 PM
link
You know my thing is if the man cant tell the truth about one person in his book and has to make up a fake characters and lie to his audience about his life and experience how am I suppose to trust this man to represent me and mine? I mean seriously he could have highlighted one relationship and and skipped the rest. I think a little subliminal control is being ignored by the media. Tie in your political ideology with emotional experiences that everyone (well most people that is) has had and try to woo them into siding with his beliefs. despicable...

His legacy of secrecy and lies will overshadow him being the first "black" president in the US, which is itself a lie, since hes a halfbreed.

And he was going to be the president for a transparent Government...

Like maybe the whole slideshow is on a kindergarten thru maybe 3rd grade plateau ?

Obama's problem is Not with kids (they don't vote !), it's with the younger Voters and the middle class (ex)workers who are unemployed.

Those voters can't get government assistance or a part time job that will pay their bills anymore !!!
The middle class does not want to become "generational" or "chronic" assistance recipients !

How can Those Voters possibly want another 4 years ? 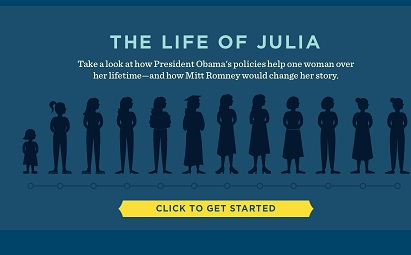 posted on May, 4 2012 @ 10:26 PM
link
Notice how Julia is too strong and independent to have a husband. Doesn't show where Julia turns 40 and has no child and hates herself for falling for the divide and conquer tactic that is the feminist movement. Also notice how Julia doesn't get to go to college under Romney because all that money goes to the millionaires (which are really nothing more than the upper middle class) and never the billionaires that run around doing whatever the hell they want. Notice how Julia loves big Government and big Government loves her until everything suddenly ends at 60 more than likely due to some death panel that decided to end Julia and hire 10 teachers.
edit on 4-5-2012 by Jagermeister because: (no reason given)