posted on May, 4 2012 @ 12:02 AM
link
Here is a great audio documentary that was released on vinyl in 1978 featuring Dr. J. Allen Hynek, scientific adviser to Project Blue Book for more than 20 years. Hearing Hynek talk at length about this subject is a treat, as is the witness testimony throughout.


The mystery visitor in this 1977 episode is an astronomer and an esteemed ufologist. He was the technical adviser on the movie Close Encounters of the Third Kind and is the world's leading expert on UFOs.

posted on May, 6 2012 @ 12:24 PM
link
This is fascinating stuff this. Here we have first-hand accounts by the actual witnesses of some very classic and very unexplainable encounters. Travis Walton's testimony was pretty chilling. And 6 other witnesses to that case all testing truthful on polygraphs. We are dealing with something real here folks. S & F o.j.

Had no idea that the film was inspired by a true incident, additionally 1976 was a big year for UFO sightings, check this article:

If you click link and it takes you to full newspaper, type page 34 in

EDIT: Strange or what, 7 mins into Pt.6, the guy who says he grabbed a bit of UFO debris from a crash site, described it as being honeycombed. Guy in this doc www.abovetopsecret.com... towards the end, shows his recovered debris and it's honeycombed as well, interesting.
edit on 6-5-2012 by Zcustosmorum because: (no reason given)

Originally posted by Orkojoker
Here is a great audio documentary that was released on vinyl in 1978 featuring Dr. J. Allen Hynek, scientific adviser to Project Blue Book for more than 20 years. Hearing Hynek talk at length about this subject is a treat, as is the witness testimony throughout.

You're right Orkojoker, it is a great audio documentary and I certainly enjoyed listening to it, the part at 2:40 in the second video where Bill Pecha describes the UFO he and his family ran away from is pretty compelling stuff - below is a witness sketch of the object. 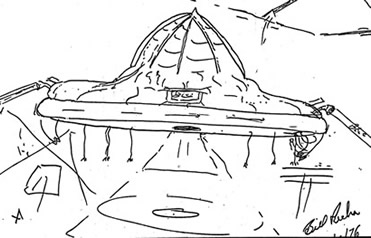 
Thanks a lot for sharing these videos.


No problem, karl. Thanks for pointing out that case - one of my favorites. Somewhere I saw an artist's rendition of that craft that was much "better" than the witnesses sketch, but I can't recall where. I'll have to skim through some books to see if I can locate it.

posted on Nov, 11 2013 @ 12:23 AM
link
Dang looks like the entire thing's been removed from Youtube and can't find another copy on the internet anywhere -did anyone manage to download a copy?