posted on May, 3 2012 @ 10:46 AM
link
• Red giant pulled in by enormous gravity of supermassive black hole
• First time a known star has been seen being 'shredded'
• Outer layers of star stripped off first, then the helium-rich core

A star that wandered too close to the centre of a galaxy 2.7 billion light years away was pulled in by the enormous gravity of the black hole - and shredded

A red giant star that wandered too close to the centre of a galaxy 2.7 billion light years away was pulled in by the enormous gravity of the black hole - and shredded.

It's the first time an observatory has seen a known star ripped apart in this way.
Using several ground- and space-based telescopes, a team of astronomers led by Suvi Gezari of the Johns Hopkins University, Baltimore, Md., identified the victim as a star rich in helium gas.

Astronomers think the bloated star was looping around the black hole in a highly elliptical orbit, similar to a comet’s elongated orbit around the Sun. On one of its close approaches, the star was stripped of its puffed-up atmosphere by the black hole’s powerful gravity. The stellar remains continued its journey around the center, until it ventured even closer to the black hole to face its ultimate demise.

Supermassive black holes, weighing millions to billions times more than the Sun, lurk in the centers of most galaxies.

These hefty monsters lie quietly until an unsuspecting victim, such as a star, wanders close enough to get ripped apart by their powerful gravitational clutches.

These NASA animations are very beautiful.


WOW that is wild!!! I have never seen anything like that in my life! very cool find, I would like to know more about what exactly is happening over on the left side where the center is. Also want to know what is up with that tail that extends out, maybe that phage guy knows.
edit on 3-5-2012 by Gwampo because: (no reason given)

posted on May, 3 2012 @ 11:13 AM
link
Did you guys read the comments? Some guy going on about Light year being a measure of distance NOT time. Good stuff. Thanks OP


I have never seen anything like that in my life! 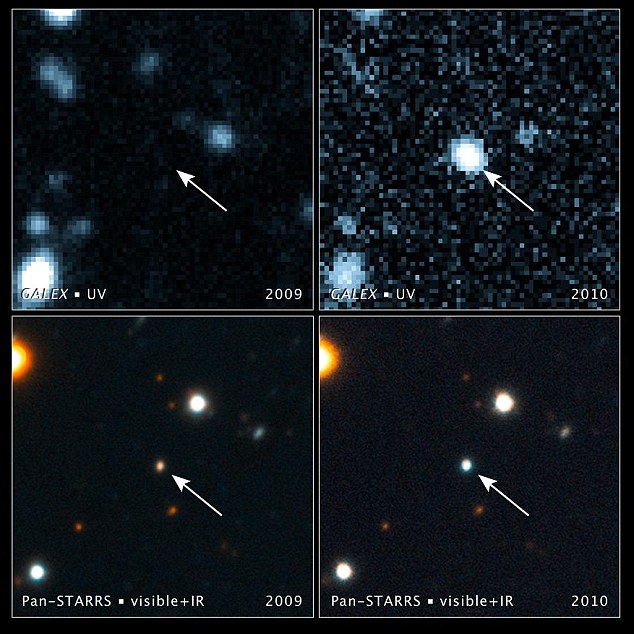 ‘The longer the event lasted, the more excited we got, because we realized this is either a very unusual supernova or an entirely different type of event, such as a star being ripped apart by a black hole,’ said team member Armin Rest of the Space Telescope Science Institute in Baltimore.

Not to take the romance away. It may not have been an event of either of the two suggested. It may have been a great big solar burp. They really just do not know because they really did not see anything happen.