New Member/Zoologist from Kentucky. Name is Jennifer. I like real Monsters. Alive, body parts, and

Basically I believe there are animals we have no discovered yet. In fact I know there are animals being discovered everyday. Though mostly frogs, lizards, and smaller creatures, often larger animals, even primates have been discovered in very remote areas, and the animals themselves prefer to live in solittude, so it makes it that much harder. Often indegenous people can be invaluable in identifying new species.

I am FASCINATED by the trenches and the race to the "bottom" by Sir Richard and James Cameron. Their subs are able maneouver in the pitch black strata of the sea Epipelagic Zone ,Mesopelagic Zone Bathypelagic Abyssopelagic Zone - and Hadalpelagic Zone .

Lately I am interested in the sea of cortez and what appear to be MEGA sized humbolts.

So, I'm all for animals we HAVE seen but only carcasses. I'm all ofr animals spoken about in legend both land and sea,. So I guess you could call me a CYRPTOZOOLOGIST.


I think there is a lot still out there to be discovered and I find it very exciting, It's my passion. Wish I had more money to fund scientific expeditions.

Anyway,nice to meet some of you here!

posted on May, 2 2012 @ 05:09 AM
link
Welcome aboard. You sound very knowledgeable about what you do. Someone I could learn a few things from.

posted on May, 2 2012 @ 06:45 AM
link
Loved the introduction! Your expertise is welcomed as are you! Hope you enjoy being a member of the best site on the web!


Welcome to the site!

There are many of us here and we all welcome you.


Humboldt Squid. There are some HUGE ones out there, but I think she means she hopes to see even larger ones! 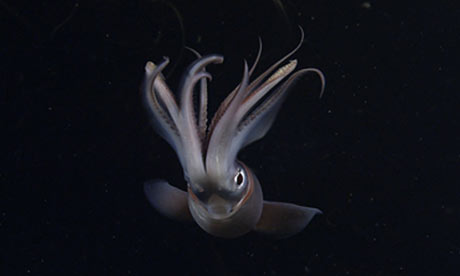 
Welcome to ATS, BlueFoxToo!! Sounds like you'll fit right in and maybe add some real knowledge to the crypto and fragile earth forums!!
edit on 5/2/12 by jennybee35 because: Add wiki link

posted on May, 2 2012 @ 09:21 AM
link
As a fellow animal lover welcome to ATS!
It's great to meet people who are knowledgeable about the animal kingdoms.
Plenty to see and do here at ATS and if you have any questions feel free to contact me or any other staff member by private message.

(speaking of fellow Blue grass staters - where is Evol Eric? Haven't seen him in some time)
edit on 2-5-2012 by Asktheanimals because: (no reason given)

Originally posted by Taupin Desciple
Welcome aboard. You sound very knowledgeable about what you do. Someone I could learn a few things from.


sperm whales dinner
edit on 2/5/2012 by maryhinge because: (no reason given)

I think you'll find the following thread to be a good resource:

Thank you for the kind welcome.
It's good to meet so many people interested in the same subject.

And yep, by humbolt I meant the squid.. They're smart buggars, they hunt in packs and communicate by flashing a myriad of colors. They also can be very mean, and they remember too...they have specifically sought out and gone after researchers who placed cameras on them before. I think they're very smart. Recently a humbolt or giant squid was photographed, it's hard to tell if it was a humbolt, but if it was, it was the largest one ever seen before. We're talking massive scale and I do mean stunningly massive. Even if it were a giant squid, we've not seen them in the sea of cortez of that size and on film. What lurks in the deep waters of the sea of cortez or any body of water, intrigues me to no end!

Recently some fishermen caught a 20 foot great white shark, roughly 2000lbs. Took them an hour to get it to shore. It was dead when they pulled it up so bringing it in was just so they could look at it. We know such large sharks in in those waters, but this was very unusual size wise.

posted on May, 2 2012 @ 02:19 PM
link
You've joined the world's largest and civil alternative topics discussion community! We understand that with rules, policies and just the shear size of the website, it can be quite overwhelming. So we've created a presentation tour with just you in mind.

Once you have achieved the minimum of 20 post replies, you will be able to create your own threads in their appropriate areas & additionally be able to send and receive messages to fellow ATS members. Private Messages can be sent to Staff only, (but after the 20 post minimum, you'll have full access).

Be sure to try out Ask ATS with any "search words" of your choice. You will find numerous threads to choose from and to add your thoughts to.

Here are some handy links to get you oriented into now becoming a valued member of ATS.

*** Please have fun! But be aware if you act in an uncivil-like manner, use profanity, troll, intentionally spread a hoax and/or get verbally abusive, you will be removed off the ride by a Moderator. This is for your safety, & also for those both young and old on the ride with you.

Welcome aboard! Don't worry too much about being 3 sheets to the wind, you'll fit in fine with that on your resume See ya around the boards, and remember, Don't feed the trolls.

Humboldt! See the "D"? Apparently, sometime in the old west a guy named "Humboldt" left his mark. (I have family in Humboldt Arizona.) This is more nitpicky than I normally get but I'm guessing this matters, given your interest in those big aggresive squishies. (May you never meet one without a cattleprod!) Safe hunting and academeic kudos. (And, seriously, they hate you.)