posted on Apr, 29 2012 @ 05:43 PM
link
Most if not all west coast Salmon stocks are severely depleted, most likely due to over-harvesting by industry and environmental pollutants, dams, etc. This puts human needs (and, more specifically, financially needs) ahead of the needs of other animals, apparently, as various agencies seek to cull off other species which compete with fish which people eat and make money selling, as stocks continue to diminish down to next to nothing.

Oregon officials were successful in getting permission to kill sea lions that feed on protected salmon trying to swim upriver to spawn. Now they want federal approval to shoot a sea bird that eats millions of baby salmon trying to reach the ocean.

And why, again, are they doing this?:

Anglin wrote that the birds are threatening restoration of wild fish protected by the Endangered Species Act, as well as hatchery fish important to sport and commercial fishing.


In recent years, the biggest single nesting colony has settled on East Sand Island at the mouth of the Columbia River. Studies show the estimated 10,500 breeding pairs there ate 22.6 million young salmon and steelhead last year, which amounts to 15 percent of the smolts — hatchery and wild — trying to reach the ocean, Roby said.

Oh, and the birds they want to kill to protect these Salmon? They are a protected species as well:


n an April 5 letter to the U.S. Fish and Wildlife Service obtained by The Associated Press, Oregon Wildlife Chief Ron Anglin says harassment has “proved insufficient” in controlling double-crested cormorants, and officials want the option of killing some of the birds. HOUSE: Discover cube Oregon needs federal approval to start shooting double-crested cormorants because the birds are protected under the Migratory Bird Treaty Act.

posted on Apr, 29 2012 @ 05:49 PM
link
I thought man was
a preditor species as well?
or have we forgotten that little fact,
,in our everyday,, goings on?
Dont hold out much hope for the birds
either,,or is that either?

Originally posted by Hillarie
I'd rather let the birds have the salmon. We can eat something else. This is awful.

I'm not sure it's 'awful' as much as it is just stupid, and deceptive. They put in hatcheries, which attract wildlife, which they then kill off, to protect the hatcheries for sport fishing and commercial fishing, but then pretend like they are concerned about the well-being of the ecosystem.

posted on Apr, 29 2012 @ 05:54 PM
link
got to love the unbridled arrogance of the good ol' human race. greed and ignorance combined to make counter-evolutionary logic of nonsense. humanity is a disgrace (yes i know, not all of it, but the ones that can and do influence nature negatively in pursuit of profit).

oh well an eco-catastrophe or 2 should straighten them out

4.6 percent of the world’s population and 33 percent of global consumption. That’s America’s grab at the goodie basket, the cause of all its conflicts, and its ultimate undoing. Remember the old hippie tune – I’d love to change the world, but I don’t know what to do? I know I had some Earth shattering revelations during multiple acid trips in the past – the problem was the next morning all traces of them were long gone. Now that I’m not drug addled the solution is clear - take America out and all’s well.

You can forget about Jevons’ paradox – that somebody will take up the slack from an American exit of the consumer base, we eat so much that the rest of the world would explode trying to force that much crap down their consumption maw. The resources of the world are shrinking rapidly so even if the 300+ million Prime Guzzlers keeled over and wasted away the pie is still a remnant of what it used to be. If it sounds like I’m just ragging on America – you god damn right I am. If the population ever groked the fact that we are gluttonous pigs that need to “about face” and personally march the fck out of WalMart and turn the entire Military Apparatus into a giant Peace Corps it’s almost impossible to fathom how much human suffering (and non-human as well) would immediately cease.
...
In other words you fat lazy stupid mutant creations of civilization at the top of the pyramid, reign it in by 20 or 30 % and give the rest of the world a break. Pull back by half and we’d stop being viewed as galacticly stupid assholes on the world stage. Better yet, throw in the towel and make a headlong rush to a lower tech agrarian based society with decentralized cottage industries making the hard goods showcased in pre war catalogues. America could then once again claim her status as a shining example of decency in a troubled world – assuming the people would be smart enough to not sell or give food to the sick… those who have a need to wield power and control over others.

Uh huh. I can’t help it if the solution is impossible. We dig our aircraft carriers too much.

posted on Apr, 29 2012 @ 06:04 PM
link
It's interesting how they claim they want to restore fish hatcheries, but they arent willing to put a stop to sport fishing or commercial harvesters, not to mention environmental pollutants which kill of the VAST majority of these fish, but instead focus their blame on other predators.

posted on Apr, 29 2012 @ 06:25 PM
link
Anyone else appreciate the laugh out loud situation they create here?? I'm awfully glad the Spotted Owl doesn't like Salmon..whatever would they do? Just kill everything?

Maybe Man can stop playing God ALL TOGETHER and let Nature do what nature does.... If the birds are eating the Salmon and man didn't put the birds there in the first place, well.... leave it ALONE!

Tough if some greenies or Animal lovers find the ugly side of nature to be...well..ugly. How do people think all those animals live and grow larger? They kill, pull apart and EAT each other. Horrible..but there ya go!

In this case.. I'd actually enjoy the show. No ..I don't mean to be a jerk. I've been fascinated by vids I've seen from Childhood of large Birds of Prey pulling equally impressive size fish right out of the water..... It's one of Nature's finer dinner shows, in my view.

(When we actually, honestly reach the point where we are stymied by the requirement to kill ONE protected species to save ANOTHER protected species...it's the PROTECTION that has gone crazy, not the way nature has ALWAYS worked..with or without us) 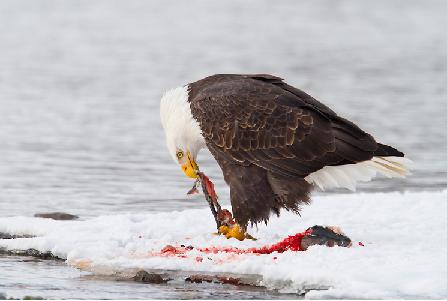 Originally posted by newcovenant
Very disturbing. So, it will presumably be open season on Bald Eagles?

Not likely, especially since the Bald Eagle population on the Oregon coast is likely not very high. They seem specifically concerned with Cormorants. But yes, both are protected under the same migratory birds act, so it could be a slippery slope.


Tough if some greenies or Animal lovers find the ugly side of nature to be...well..ugly. How do people think all those animals live and grow larger? They kill, pull apart and EAT each other. Horrible..but there ya go!

Um, what? This has nothing to do with 'greenies and animals lovers'. It has to do with protecting the sport fishing industry and the salmon harvesting industry.

Did you even read the article?

The 'greenies and animals lovers' are the ones up in arms, silly goose!

Indeed. If I hadn't read the article to get the sense and tone of this, it wouldn't have been so humorous.

The spirit and priorities for the protection of a bird of prey under the Migratory act in 1972 has to be put to the side, because a fish protected under the Endangered Species Act is being killed too often by the bird....which they've deemed must be killed...and so the circle of logic that started with good intentions must continue. Oh, it's a mental pretzel of their own creation. The only non-political thing in sight here are the physical birds and fish themselves.

The greenie angle is 100% based in HOW that Bird got into it's status as well as how the Fish got there and the entire atmosphere in the State of Oregon for protecting seemingly everything but humans themselves. The atmosphere part is digressing a tad....but the source and spirit of the protections which are in direct conflict here would seem to be what the whole issue is here.


The greenie angle is 100% based in HOW that Bird got into it's status as well as how the Fish got there and the entire atmosphere in the State of Oregon for protecting seemingly everything but humans themselves.

I hate to get in the way of your entirely unrelated anti 'greenie' rant, but You DO grasp that the issue being discussed here shows that these decisions are being made 100% for the benefit of humans and not animals, right?

Have a good night, stanguilles7. I honestly hadn't realized whose thread, by name, this was. I'm not just joking when I say I debate topics and not people...to the point that, without a flashy avatar to stick in my mind? I rarely even take note of the name of the person with regard to how anything gets approached.

My bad for not avoiding your thread. I believe I'd said once before I wouldn't touch one again...and I'll work harder on that... No hard feelings intended or felt. Just a boo-boo and from my side. Take care.

Originally posted by newcovenant
Very disturbing. So, it will presumably be open season on Bald Eagles?


I love those too.

posted on Apr, 29 2012 @ 09:36 PM
link
This is ridiculous. They act like salmon meat is selling like crazy off the food store shelves. There is nothing out of place for animals feeding on their natural food source and they make it sound like the animals are eating a substantial amount that's crushing their industry. They should invest in manure, because this sounds like a load of BS to me.
edit on 29-4-2012 by sean because: (no reason given)


If I did not live in Oregon near the areas with the sea lions, I would probably agree with most of what you wrote. You need to picture around 1000 sea lions, near a dam located 90 miles from the ocean. The dam serves as a collection point for fish for sea lions to eat and there is nothing natural about that.

It is so bad sometimes, that you can not even get a fish, because a sea lion will come and take it, and while this might sound silly, it is a problem. I would never agree with killing any wild animal doing what a wild animal should be doing, which in this case is eating...but they tried moving the sea lions over and over and they just kept coming back. But I admit it does sound barbaric to just start killing animals that are not behaving the way we want them to, and just like with the sea lions, it will usually be a losing battle.

This issue is about a choice, do we want sea lions and birds, or salmon? I would prefer salmon, since it is already hard enough for them to travel upstream and downstream through dams and fish ladders. I read somewhere that 90% of young salmon die going through dams. Also, dams create a huge food supply that creates a population explosion, making the problem worse. Modern technology does not always blend well with nature.