posted on Apr, 28 2012 @ 06:49 PM
link
A couple of days ago I was watching an episode of Conan, and during this show Conan O'Brien recently went down to San Diego to pay a visit to the students at UCSD's Sixth College which renamed the school Conan O'Brien College for 24 hours in honor of the late night talk show host. He met with some of the teachers and students and made some jokes as he usually does.
Later on he did a Q & A session with many of the students and answered many of their questions. One student asked Conan, "If there was a zombie apocalypse what would you do?" Then Conan says "Go to Denver International Airport!" I was shocked! Why did he say that? Was there an inside joke he had with the students that didn't air? Seemed like he was jabbing at conspiracy theorists, or maybe hinting that the DIA will be a safe haven when the SHTF?
Very weird joke to include in the highlight reel of an hour long speech he made at the school! I tried to find a video to show you guys, but here in Canada I could not find a version that was watchable to me! So just google or youtube search "Conan visits Conan O'Brien College"
We all know of the Denver International Airport and the supposed underground bunkers that it was build on top of. All the weird imagery and haunting murals that are there. Does Conan know something that us "sheeple" don't?
Was it just a joke, or a veiled hint?
edit on (28/4/12) by SLAPurMAMA because: (no reason given)

posted on Apr, 28 2012 @ 06:56 PM
link
I doubt he meant any humor in it at all. I'd wonder if he KNOWS what he's talking about or simply THINKS he knows, but beyond that, I sure know enough about DIA to know I DO NOT know half of what that place is about or what has been built there.

...and if I have one wish to see ONE thing in this world totally and utterly destroyed...it's Bluecipher. Research DIA if the name doesn't ring a bell. Describing that monument to evil intentions doesn't do justice to loading a picture of it for the first view.

I find it rather hard to believe that a talk show host like Conan would be clued into something which would obviously be highly classified...but who knows? Maybe he got his ticket to the Ark and unlike the movie, it's in Denver, not China. ..or more likely, if he knows something, he ran into someone or overheard something in his career and the people it's put him around over the years.


Years ago, when DIA was being built, my husband (an airline pilot) and I took our kids out there for a picnic. We wanted to see the airport before it opened. It was such a beautiful building, and we were the only ones there. We wandered concourse to concourse, looked at all the fossils embedded in the floor, looked at all the crazy paintings on the walls, and rode the trams for hours. Honestly, there wasn't a single person around at all. It was creepy, being all alone in that huge airport.

If I had only known all the theories about that place, I'd have gone down into the "tombs" (baggage areas) to look for the tunnels. I do remember there being a huge, and I mean huge, amount of dirt and rock displaced to build that airport. Everyone was talking about it, and I also remember there being some fuss made about the fact they built these tunnels and then "filled them in", as they went way over budget.

And their runways are shaped like swastikas (weird to say the least)
edit on 28-4-2012 by jdb51 because: (no reason given)

posted on Apr, 28 2012 @ 07:11 PM
link
conan used to write for the simpsons. they have a habit of showing the illuminati reality, but buried in comedy and jokes.

much like nostradamus did with his prophesies, but his were hidden in riddles and quatrains.

posted on Apr, 28 2012 @ 07:16 PM
link
Could the DIA be a massive underground prison or death camp?
Imagine if when the SHTF all the "conspiracy nuts" head to DIA and to their surprise are allowed in?
If the DIA is mentioned in such terms more often i will start to seriously wonder!


The best place to hide something is in plain sight, i cant remember who im quoting but its what your saying and its a common practice for certain groups.

That must have been quite an experience to wander that place as a ghost town. I've been through DIA a few times now in connecting flights to the West Coast and back and it's impressed me for how well it all works compared to places like Haltsfield and Salt Lake City hubs. Denver at least works.

ooooo... I'll just bet you do kick yourself for having the chance so many of us would give anything for now. Unrestricted access to explore and follow whatever path we find in the underground there.

Personally, in my opinion of it all, I don't believe they are hiding some big FEMA camp or anything particularly nefarious. 2005 Media stories show the CIA DID move it's Domestic division to Denver...and funny thing? I can't find publicly listed locations that can account for the size and reasonable numbers for staffing like it was described to be in Virginia. I'm leaving that there...but to say if there wouldn't seem to be addresses for their move, I think to look down, beneath our feet.

Guess what has massive, unaccounted for excavations are right in the proper spot? Hell...I can even see the humor of it all. Can you imagine the occasional laughter in the break rooms of the fact these guys..or whatever is down there...are passing through the MOST public of facilities known to mankind...to reach what is likely one of the MOST classified? The Irony has to have them in stitches when they stop to think about it.

Long term..again..my opinion.. DIA just replaced Site B / Mt Weather for the alternate command and control facilities to Congress and the Supreme Court. MAYBE Obama too. It wouldn't shock me if they dug out a large enough facility for everyone. I'd only doubt that possibility by the fact it'd still put the whole shabang in one physical location.

I agree with you what an odd thing to say I don't think it was meant to be a joke.


If you are able to view a video (I cannot, being in Canada it says that I am not in the right country to view) of the segment he put on his show, you will see how out of place the "joke" seems to be. And with an hour long speech he made at the school, why is that "joke" featured on the 6 minute segment he aired?

posted on Apr, 28 2012 @ 08:43 PM
link
I thought a few photos of something as innocent as the Horse they put out front of their brand new Airport in Denver might help people get a feel for a place that is like nowhere else in so many ways. What could they possible do to the statue of a horse, some may ask? It's paranoid thinking...to see Mr. Ed as an evil monument to someone's warped vision, some may suggest. After all...... Evil horses? one might laugh. Who would imagine such a thing mounted in public, in front of a world class International Airport as it's Mascot. Impossible, eh?

Meet what the locals refer to as Blucifer. As in Blue Lucifer or the Blue Devil. This ain't Mr. Ed. 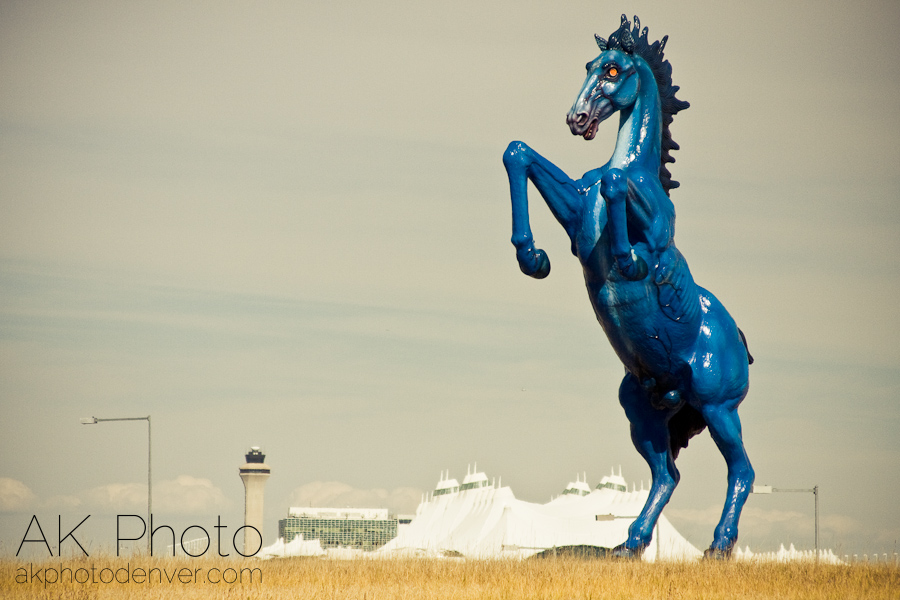 You know, I honestly looked for photos that did NOT put this thing in a bad light. The fact is, this is just an evil friggen statue and there isn't a 'good' way of photographing it by what I saw. The better they look, the further they seem to be and showing less and less detail. The devil..ahem..IS in the details for this. 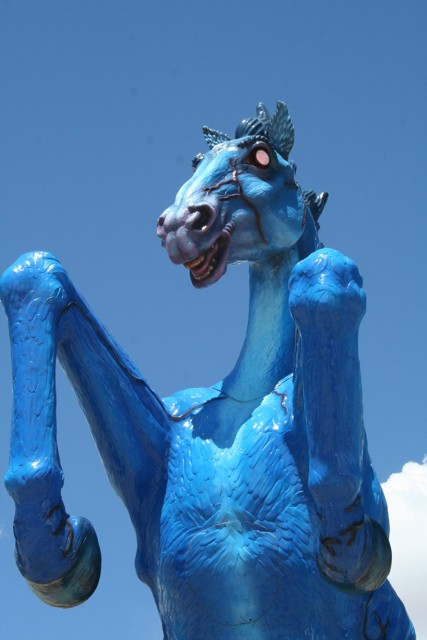 The eyes aren't being faked in all these photos for how they stand out. They are lit, intentionally and glow red at night. You can't make this up. It's made this way and the details aren't accidental. 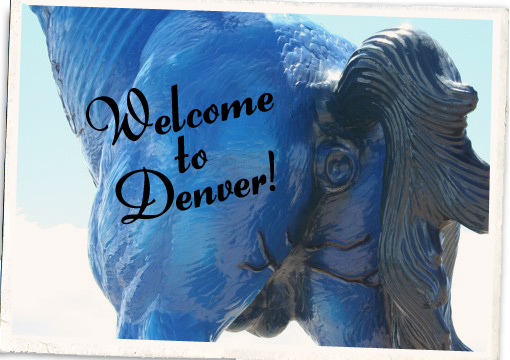 We're all adults here....so lets not get silly on this one. This is interesting for details as I'm sure many of us have been in museums or other settings where the massive battle horses of past eras are depicted. bulging veins and such aren't prominent as I recall, even when those fighting breeds are being shown. Not like this.

so finally, I'll leave one final image of our little Mascot to the Denver International Airport and watcher over the plains out around it.... Say goodbye to Blucifer....may a meteor land right on his evil, glowing little head one of these days and leave nothing but a crater where once this ...'art'..stood. 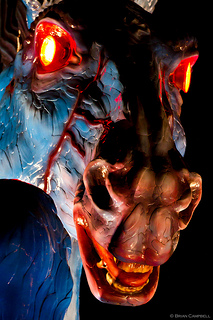 Not to continue derailing the thread, but......

Bluecifer killed his own sculptor. How is that for a final irony? The man who sculpted Bluecifer never finished, as it fell on him days before he completed it. Look it up


I've always been suspicious of DIA, but of course, there's no concrete proof that anything nefarious is going on there. I wonder if it would be possible to privately contract a ground penetrating radar plane to take a radar image of that area? Of course, there must be a no-fly zone to keep aircraft safe around that airport.

posted on Apr, 29 2012 @ 10:35 AM
link
There are soooo many weird things about Denver Airport!!! That horse has sure got to be the creepiest alongside the apocolyptic and masonix pictures all inside...was there ever any statement about why they choose that statue? I'm gunna research blue horses and their significance...plus all that unnacounted space we know they've got underneath....I'm defo heading for denver at the first sign of SHTF!! You all better be there with me if we have to fight to our spot! LOL


I am really thinking about the 4 horse men of the apocalypse for this statue! I don't know for sure, but it goes along with all the themes of the murals inside!


Well, obviously Conan just outed himself as a Grand Illuminati Wizard, so now I'm sure he will end up being poisoned by next week. OR, maybe he is a comedian and was telling a joke. I'm not sure which one to believe.


I don't know if he is a grand wizard, but he is somehow involved!

Pulled this up from a quick google search.