P40 Found in the Sahara Desert

posted on Apr, 28 2012 @ 10:57 AM
link
Anyone know the back story on this? I got this through a e-mail from my dad who is retired military but don't know anything about it really. Any thoughts? I did a quick search here and don't find any topics and a quick browse around google didn't turn up anything definitive either. Pretty cool find either way though.

Never the less, it's a pretty cool find.


Wow,that is awesome-Its in really good condition if its been there since WW2.
Maybe it crashed later,or the sand would have covered it by now surely?
I am guessing the photographer was the first to find it,otherwise all the cool bits would have been taken away maybe..

It looks in good enough condition to get serial numbers off parts of it,which could help identify who was piloting it,and when it crashed.


Edit:This image has a serial number on it-I think its the ammo box?
I bet someone could dig around and find out what happened to it from the number on this pic:


Ok final Edit!!
The paint on the wings looks almost untouched-so either it was once buried,protecting the paintwork,or maybe its a film prop?
Although I doubt a film prop would have so much detail,with serial numbers and such.
edit on 28/4/2012 by Silcone Synapse because: more words added Sorry for derailing thread, i totally didnt know you were referring to a plane, what an idiot lol.

Cool find and thanks for sharing

Crashed in WW2 then?
Anyone find any damage to suggest it was shot down?
Hmmm...great puzzle!

looking at the engine,I bet you could get that going again with a good clean up and new hoses fitted.Notice all the hoses have perished and gone years back-You can see where they should be connected in this image:

What a find by those guys-How chuffed would you be to find something like this,untouched for decades.
Totally cool.

posted on Apr, 28 2012 @ 11:25 AM
link
Here's a more complete story from Vintage Wings of Canada. There's a video of the initial find, and a video of Egyptian soldiers removing (still-live) ammunition.

ETA: Well, I see Silicone Synapse beat me to the video. There's still some interesting commentary at the link. They seem to be determined to get to the bottom of who the pilot was and whether he survived--as well as other details.
edit on 4/28/2012 by Ex_CT2 because: (no reason given)


Nice link.
Yeah,I just read on the finders youtube comments that the Egyptian army came to take away any live ammo to make it safe.
I think he said its on "army land"so no one can go and pinch it.
Man,they should have phoned the Smithsonian or something to sell it to them...must be worth a packet,hope they don't just dismantle it for scrap!

Its a proper piece of history,and should be looked after I think.

(From the link--referring to one of the photos)


Here we see the power of the sun as it beats relentlessly down on the P-40 in the Egyptian desert. Most of the front of the fuselage and wings has been scoured of paint by the sand perhaps indicating that the aircraft was pointed into the prevailing winds - logical as the pilot would have landing up wind.


Some of the paint looks worn away,but parts look to me as though they are undamaged-maybe they were partially buried though?


Edit:Having looked again-I first thought the wing paint was grey-but now I am thinking that is the bare metal.So yes,it has been there for a long while.
edit on 28/4/2012 by Silcone Synapse because: more words added

posted on Apr, 28 2012 @ 01:01 PM
link
Great find, it makes one wonder how many more are still undiscovered . There is certainly an eerie quality to the wreck and its locale.

For anyone wondering, the control surfaces (rudder, elevator and ailerons) were fabric covered and have been worn away by the elements over time hence the tail damage and exposed ribbing shown in the photos.

Anyone familiar with the story of the Lady Be Good? 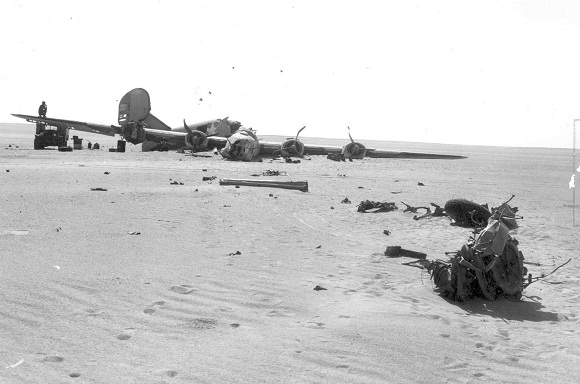 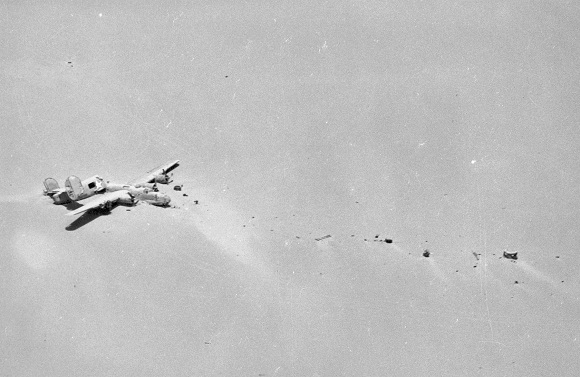 Story of the 1959-60 search for and recovery of crew members of the B-24 Bomber Lady Be Good. This aircraft was discovered in the Libyan Desert 16 years after it lost its way back from a World War II mission to bomb Naples, Italy on 4 April 1943.

The plane was found in 1959 by an oil exploration team, miraculously preserved by the desert environment.

The next year the bodies of eight of the nine crew members were recovered by Quartermaster Graves Registration personnel.

Lady Be Good was an American B-24D Liberator, AAF serial number 41-24301, which flew for the United States Army Air Forces during World War II. Based at Soluch Field in Soluch (today Suluq and Benina International Airport, Libya) as part of the 514th Bomb Squadron, 376th Bomb Group, it failed to return from an April 4, 1943 bombing raid on Naples, Italy. At the time, the plane was assumed to have crashed into the Mediterranean Sea and its nine crew members were classified as Missing in Action.

In 1958 the nearly intact Lady Be Good was discovered 710 km (440 miles) inland. Subsequent searches uncovered the remains of all but one of the crew.

The story was also the inspiration for one of the better original Twilight Zone episodes...

as well as a long forgotten made for t.v. movie starring William Shatner...

Lastly, any self respecting ATS member with an interest in military aircraft wrecks should see the B-17 sequence in the 1981 animated film Heavy Metal (sorry, I could only find this one on myspace and couldn't embed the video so you'll have to click the link. Its only a few minutes long and well worth it )


My guess is that it was under sand for a long time. The sand moves in waves much like water and can bury things and then move off and leave whatever was once buried exposed. It could have easily been set down in the sand in WWII and then covered up by dunes before anyone could return for it making it almost impossible to find. And remember. No GPS back then.. You just had to know where it was and once the pilot walked away, if he walked away it would have been impossible to locate again if a dune covered. That could explain the lack of major damage to it from the elements. I Will keep reading the thread now. I need to sit down and do some more research on this but its been a busy day for me. Just wanted to share though.

posted on Apr, 30 2012 @ 07:44 PM
link
Very cool!!! The P40 is one of my favorite fighters from WWII. I also like the Corsairs, but that's because I watched The Black Sheep Squadron when I was a kid with my grandfather.

It's so cool that it's been so well preserved. It's amazing what sand can do.


Thanks for the thread!

posted on Apr, 30 2012 @ 09:27 PM
link
Reading the entries in the two journals is sad and chilling. I can't imagine the struggle that these men must have endured.