Serious Question: Why does the Pope look so freaking EVIL?

I just think the pope looks EVIL. I mean, look at him. JUST LOOK AT HIM. Would you trust your soul to a man who looks like THAT?

I don't care what your religion, at some point common freaking sense has to kick in, right?

Doesn't the Vatican have a zillion trillion bazillion dollars? Can't they at least afford a better makeup artist or something, if not a plastic surgeon? 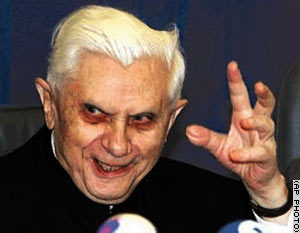 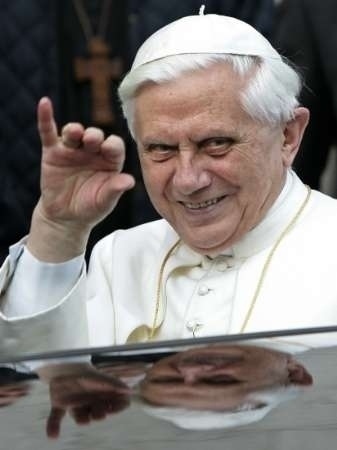 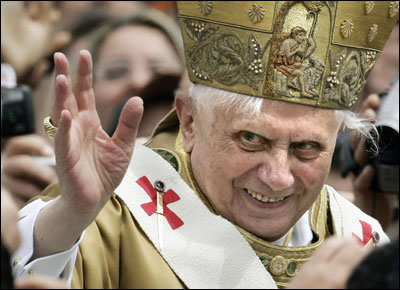 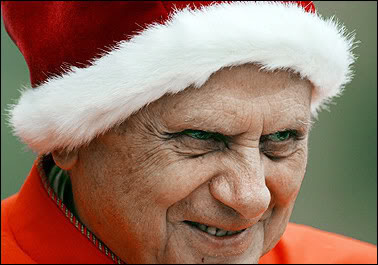 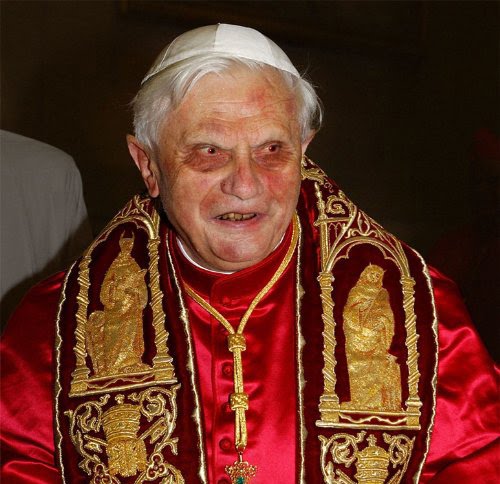 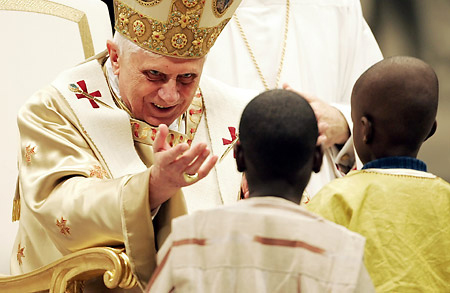 ...and here's a pic of the baby wombat, as a kind of antidote, to clean your mental palate after all that: 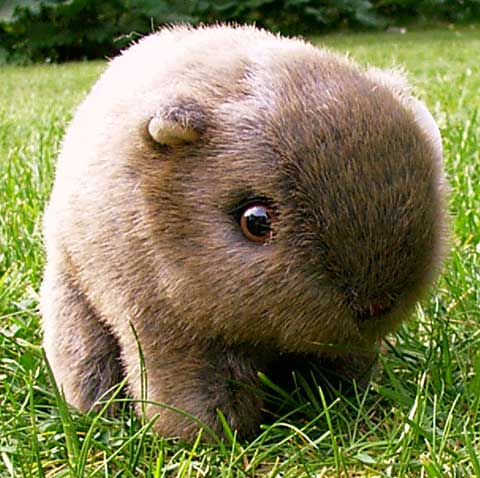 Originally posted by FailedProphet
...and here's a pic of the baby wombat, as a kind of antidote, to clean your mental palate after all that:

Heres another one that I found


He's so perfect. He's SO evil looking... it's just so.. Oh.. Please forgive me, the Catholics on ATS, but the first thing I thought of the very first time I saw this Pope was that there must be some family resemblance. They could be brothers... 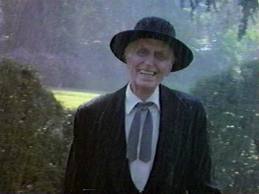 Okay, for those who never had the pleasure of one of the better scary movie series.... Here is a better view...


The Pope could also be mistaken for the Emperor of Dark Side fame with a black hoodie and a throne room to sit in. You just can't make this stuff up.

posted on Apr, 28 2012 @ 03:06 AM
link
Well, isn't whole catholic church evil? Because its way more towards controlling people that other christian faiths. Pope is like president of every catholic on earth.

posted on Apr, 28 2012 @ 03:06 AM
link
I'll have to admit,some of those gargoyles that protrude from the vatican would get a date before him...what a beastly,evil looking pedophile...

LOL - great pics! I don't mean to offend anyone, but those are too funny, thanks for the laugh!!

err... I wouldn't agree on the Church being evil part, but I do seem to recall the Bible saying the last Pope would be a doozy and a real man apart from all who came before him. So far, this one isn't giving a lot of reason to point and say this can't be him.


agreed everytime i see him i think about star wars and how its kind of funny he so accurately fits the description of a sith lord.... physical effects of channeling the dark side
"The dark side was seen as having been used for selfish purposes, although many darksiders who were accused of such selfishness claimed that their dark side was simply a means to achieve an end."
"Many found the dark side to be addictive, being unable to resist its pull the more they subjected themselves to it. Dark side users became more powerful as their physical bodies slowly decayed."

but then fiction has always been inspired by elements of reality


The previous Pope didn't look that evil. Neither does the kindly old lady in the apartment downstairs who is about the same age.

I'm not saying he has to look like Justin Beiber...just can't they do better than a Dark Lord of the Sith?

posted on Apr, 28 2012 @ 04:04 AM
link
I honestly just think he's OLD man. Like REALLY old.
His skin is loose and makes his eyes appear smaller, because his lids have dropped and become heavy. And he's got teeth to rival the late Queen Mother.

ah jokes about sheltering pedophiles really are very amusing....
i agree with your comparison of the pope to the queen and not because i think either one is inherently good
more because theyre both immensely wealthy and feel entitled to many things including the adoration of the masses
theyre both completely incapable of being able to relate to the average man
they will both do unsavory things in the name of political leverage
and neither is above using their position to try to influence people into backing their personal cause under the guise of god or country
edit on 28-4-2012 by sirhumperdink because: (no reason given)


These pictures are so cute. Im sorry but I could right now not care less about the pictures of humans. I am in a cuteness overload mode. It is like the duck I saw this week with about 7-8 kids following her. So increadably cute walking around the parking lot and grassparts at work.
edit on 28-4-2012 by apushforenlightment because: spellchecking

The current Pope was a ranking Nazi brown shirt!
To get to his position you had to take a few tests, one was generally to use a pistol to shoot a child, Jew, Gypsies, didn't matter. After the war he joined a religious order as a brother then became a priest.

He was assigned to the Vatican and because of his gifts spent decades being the man in charge of covering up and controlling fall out from all the child rapes committed by the church worldwide.

He collected so much dirt on so many church people that when the last Pope died they had no choice but to give him the throne. (Yes, he has his own throne)

The reason he looks evil is because he is. One very evil person without any conscience whatsoever.

That look, that expression he has on his face is simply one similar to the Sith lords ..... Stuff you all.

He is evil incarnate!

Originally posted by Lulzaroonie
I honestly just think he's OLD man. Like REALLY old.
His skin is loose and makes his eyes appear smaller, because his lids have dropped and become heavy. And he's got teeth to rival the late Queen Mother.

he's wearing one of these...

and he's the devil with a crucifix!

personally I believe he drinks the blood of virgins to attempt to be reborn...

the pope's adherents may not realize that Hell Awaits!!!

Tom Araya sings to the Pope, ask him...

Originally posted by Frankenchrist
Is that cross upside down?

Of course.
That's the Cross of St. Peter who apparently wished to be crucified upside down. All the popes use that Cross as they are seen as the successor of St. Peter.
Despite popular believe, it has nothing to do with Satanism.

Catholics flaunt upside down crosses alot because Simon Peter asked to be crucified upside down. He felt that he didn't deserve to be crucified in like manner as Yeshua because he rejected him 3 times before the rooster crowed the night the Sanhedrin's enforcerers took him in chains from the garden of Gathsemane. They claim Simon Peter was the first Pope even though archeaologists proved that him being buried in Rome is a lie.

They place too much value on waving the sign of the cross in the air. The cross in itself is just a symbol, what you do with it is what makes it evil.

The Sign of the Cross
There is yet one more symbol of the Romish worship to be noticed, and that is the sign of the cross. In the Papal system as is well known, the sign of the cross and the image of the cross are all in all. No prayer can be said, no worship engaged in, no step almost can be taken, without the frequent use of the sign of the cross. The cross is looked upon as the grand charm, as the great refuge in every season of danger, in every hour of temptation as the infallible preservative from all the powers of darkness. The cross is adored with all the homage due only to the Most High; and for any one to call it, in the hearing of a genuine Romanist, by the Scriptural term, "the accursed tree," is a mortal offence. To say that such superstitious feeling for the sign of the cross, such worship as Rome pays to a wooden or a metal cross, ever grew out of the saying of Paul, "God forbid that I should glory, save in the cross of our Lord Jesus Christ"--that is, in the doctrine of Christ crucified--is a mere absurdity, a shallow subterfuge and pretence. The magic virtues attributed to the so-called sign of the cross, the worship bestowed on it, never came from such a source. The same sign of the cross that Rome now worships was used in the Babylonian Mysteries, was applied by Paganism to the same magic purposes, was honoured with the same honours. That which is now called the Christian cross was originally no Christian emblem at all, but was the mystic Tau of the Chaldeans and Egyptians--the true original form of the letter T--the initial of the name of Tammuz--which, in Hebrew, radically the same as ancient Chaldee, as found on coins, was formed as in No. 1 of the accompanying woodcut (Fig. 43); and in Etrurian and Coptic, as in Nos. 2 and 3. That mystic Tau was marked in baptism on the foreheads of those initiated in the Mysteries, * and was used in every variety of way as a most sacred symbol.

I recommend reading "The Two Babylons" for anyone who wishes to see what is really lying under the surface of Romanism (Roman Catholicism).


Oh, I don't know about that. Maybe pretending to be god has it's health benefits. 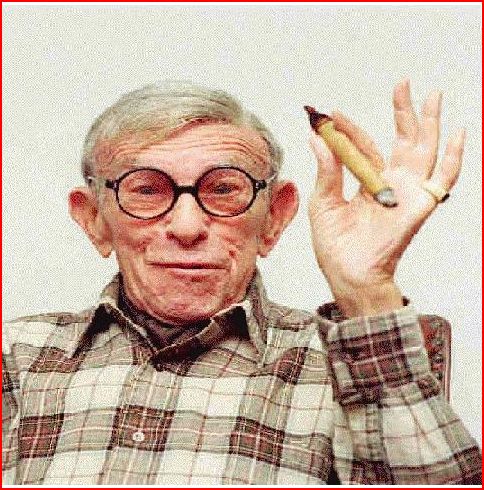 While pretending to be god's very representaive doesn't.