posted on Apr, 4 2010 @ 07:04 PM
link
I gotta say leaving JFK off the list was just a little to conspiratorial and makes me question why? Not to mention the Port of Chicago incident perhaps you didn't want to stir the pot too much or their just isn't enough good info to support a conspiracy one way or another. The book Others Unknown by Stephen Jones raises many questions concerning the Oklahoma City Bombing and of course 9/11 has many unanswered questions as well.

How about an All American top ten list covering the last 100 years or so or what I'd like to hear more about but hardly anyone ever talks about is all the giant skeletons unearthed in the early 1800's in the midwest and California and conveniently 'lost' by the Smithsonian.

Or better yet get the ATS subscribers to rate their favorite top ten lists and compile a list based on that.


Sorry as I haven't had time to read anything other than the OP.

Bravo to you OP. You are a credit to ATS, your peers and the community in general for your exemplory approach to conspiracy theory(ies).

That should mean something coming from a "disinformation agent".
It's refreshing to see intelligence and conspiracy go hand in hand for once, as I'm tired of being labeled "debunker" for providing evidence contrary to mainstream conspiracy theorists' wild speculation.

I'm sure that if evidence ever surfaced that was proven reliable and accurate contradicting anything you have said here that you would be first in line to not only check it out, but truly try to synthesize and understand it.

posted on Apr, 21 2010 @ 01:17 PM
link
I agree that the JFK assassination should definitely be up in that list along with Operation Northwoods, but other than that great list

posted on Apr, 23 2010 @ 12:33 AM
link
I agree with one of the comments. The best conspiracy is the one we dont know. This has to do with mind control and who knows, in one of icke's books he says that our brain sends a signal for us to move or do anything before we even consciously decide to do so. Who is pulling the strings?

posted on Apr, 23 2010 @ 11:42 PM
link
I think the assassination of JFK was a major turning point in U.S. history. And I think the formation of the Federal Reserve was the beginning of the end.

posted on May, 6 2010 @ 07:41 PM
link
Hey - new to this site. Does anyone know the best way to authenticate something? Like old papers, photos, footage, etc? Are there experts for conspiracy related verifications? Would appreciate the help!

posted on May, 14 2010 @ 01:22 AM
link
Hello. I am what is called a "new member." Frankly, I do not intend to post too much. I might not post after this. Rather, I prefer to use this site for research on power elites and the nature of secrecy. So many conspiracy sites get bogged down in to racial theories or strange occult concepts, and if this one does I will simply leave.

Conspiracy is not theory. It is a fact of life. All we have to do is to look how war criminals like Von Braun became lionized as heroes to know that something is not right. In any case, my one probable comment (I may make more, but probably not) will be about the Kennedy assassination. We do not even have to dig too far in order to know that the Warren Commission was an unconstitutional body. The Executive Branch cannot act as a Judicial Body. Even the presence of Earl Warren was unconstitutional because he was, in effect, working under the President and that violated the separation of powers. We do not even have to go to the Grassy Knoll to know that an actual legal conspiracy existed---the Warren Commission itself.

The House Select Committee on Assassinations, however, was the real deal. And, it concluded that a conspiracy happened, even if I do not believe that it plumbed the full dimension of that conspiracy. The House Committee was much more of a judicial body than anything out of the Executive Branch. Yet, the media continues as though the Warren Commission could render judgement when it could not, and had no Constitutional authority. Meanwhile, the House Select Committee gets no coverage. The same type of cover-ups exist around the King, Bobby and Malcolm X assassinations. Oh, and yes, Paul Wellstone, Gary Webb, Iris Chang...etc.

The same could be said for "case closed" positions on UFO's, or any number of subjects. That does not mean that I go for the stranger theories, that can only act as disinformation. My focus is on the sociology of elites, and the philosophical questions around liberty and power. I hope that this forum will be useful.


great post.I agree that more could be added.

1: ATS is a government front 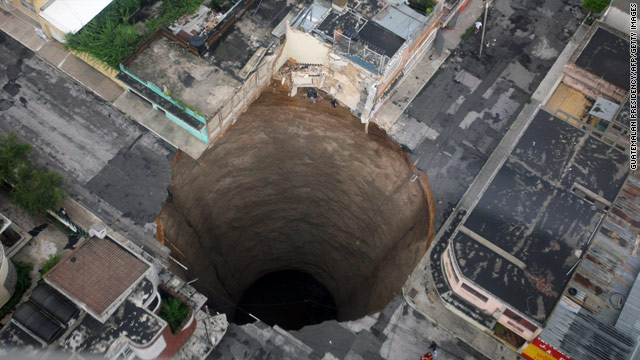 Can a mod please point this on a new thread? This is my first contribution to ATS. Thank you.

The office of Guatemala's president handed out this aerial view of a crater that opened up after Agatha hit.

(CNN) -- At least 115 people have died after a tropical storm battered Guatemala, Honduras and El Salvador over the weekend, officials in those countries reported. Guatemala was hit hardest, with at least 92 deaths, 54 people missing and 59 injured, emergency officials said. Nearly 112,000 people have been evacuated and more than 29,000 are living in temporary shelters, Guatemalan President Alvaro Colom said in an address to the nation late Sunday. The devastation has been widespread throughout Guatemala with mudslides destroying homes and buildings and burying some victims. At least nine rivers have dramatically higher levels and 13 bridges have collapsed, the nation's emergency services said.