What Would You Do If You Had Defintive Proof?

posted on Apr, 16 2012 @ 06:42 PM
link
Here is a fun question! What if you had filmed a UFO in HD quality that was so conclusive that even the hardened skeptic would fall out of their chairs in shock with. Good quality footage of a UFO even with a door, ramp and ailens giving a high five! Well you know what I mean! Would you send it to all the major news outlets pronto? Show it to your friends and have a UFO party or just save it and share with your immediate family for fear of it bringing you life long publicity?

What would I do? Well i guess I will never have the privelledge but if I did, I would make copies and store in several secret deposit boxes and hiding places and then I would mail more copies to news outlets with the proviso that I wish to remain annoymous, a nominal payment for postage and packaging etc but thats it. Then once it rolls on the news and it is accepted as the real deal I'd crack open a bottle of champagne and sigh a breath of relief that the Human Race is forced to grow up at long last and face FACTS and not a dammed cover up again. I would also have the added satisfaction of being able to say to those around me I was not mad after all! Very carthtic!


Not post it on ATS for it would be "debunked" within 8 posts.

I have family and a life I dearly love, I've read too many list of dead bell ringers and scientists, I couldn't risk the MIB comming for me, probably mail tapes to a different countries, be carefully of finger prints and mail from 5 states away under a false name...

Originally posted by amongus
reply to post by Wirral Bagpuss


Not post it on ATS for it would be "debunked" within 8 posts.

This stuff gets debunked so easily because it's ridiculous...

Spaceships that can carry life across the universe is impossible.

Technology brings laziness, not enlightenment. If there are beings in the universe smarter than us, they don't use such meaningless crap.

Technology has made us weak. That is some real truth for you.

posted on Apr, 16 2012 @ 06:54 PM
link
honestly, I wouldnt tell anyone, noone would believe it anyhow, unless a ship landed in a sports stadium full of people or a huge mother ship was seen hovering over a major city
edit on 4/16/2012 by HomerinNC because: (no reason given)

posted on Apr, 16 2012 @ 06:57 PM
link
In this day and age, you would likely need at least 3 sources of video of the captured event from various angles. Each individual source would hopefully not know the other personally.

The camera data would have to be analyzed (EXIF data, etc.) and checked to make sure no CGI video files were stored there previously prior to capturing the event. (organized hoax).

Still, many are not convinced by photographic evidence (no matter how compelling).

A combination of audio/visual _and_ physical evidence would likely be required to sway the scientific community and/or public opinion.

Theres no point trying to convince the world with just video..as long as i knew for myself and i was rich id die happy

The problem with that is, my hard drives crapped the bed on me soon after. They were less than 2 years old and in good working condition before they died on me. Now all I have is 1 crappy pic left of what I know exists.

Next time I should put it on a flash drive.

posted on Apr, 16 2012 @ 07:11 PM
link
Yep, I'd keep some copies and just show it to my close friends and the important people in my life. There's a couple of places on the internet I'd think about presenting it at, but yeah as someone else said probably not ATS, the reactions around here are generally too dumb for my liking.

I had proof, but it messed up before I could show it to anyone.

I had proof, but it messed up before I could show it to anyone.


Here's my 1 crappy pic that survived... 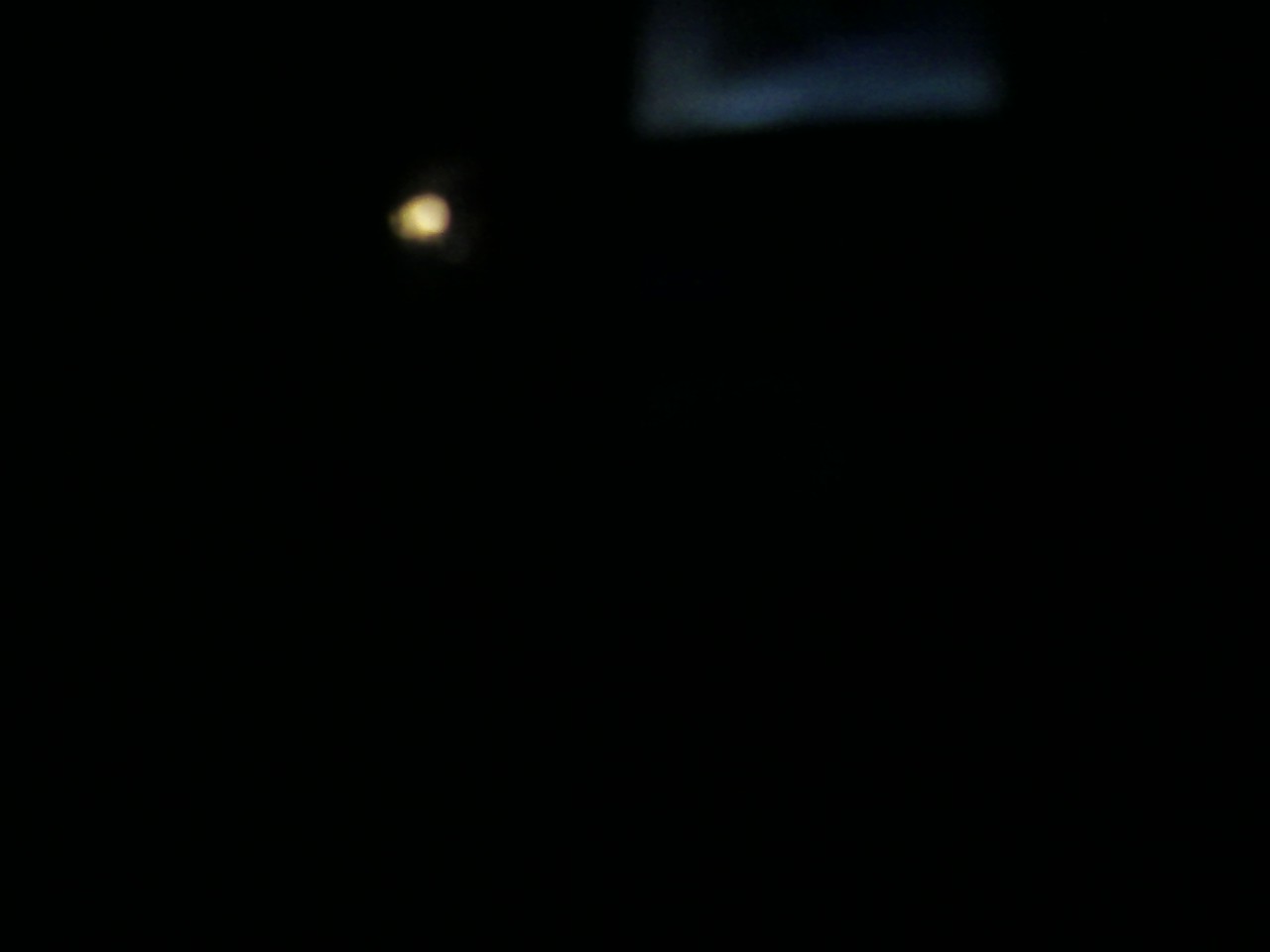 It's a triangle craft, that light is a corner light. It was so big that's all I could get in the frame as it passed over my car. The blueish light is the LCD screen reflecting off my windshield as it passed over.

By all means, dissect and debunk it. No one has yet.

ETA- point of reference, this is the closest match to what I saw. Start at 4:22 - mute volume, it's not needed.

posted on Apr, 16 2012 @ 07:27 PM
link
I would just keep quite about it. It would be pointless to even try and tell any about it.
A real live alien from space could take pictures of itself and of its ship and post them on the net and they would still be "debunked". Did you not know that ALL pictures of UFOs and aliens are fake even if they were take by an alien.

In other words, whatever you film would have to schedule another performance, as well as possibly going on tour, meeting people, shaking hands, autographing t-shirts and boobies, etc.

If there's ETs and they continue to act like scared little b!@ches, then, there's always going to be speculation.

posted on Apr, 16 2012 @ 09:44 PM
link
If an alien spaceship landed in Times Square tomorrow, you'd still have people screaming "hoax!" and others just shaking their heads wondering what Hollywood will come up with next.


I personally have never seen anything weird in the sky, but if I did, and managed to get good footage of it - I'd do nearly what you said you would. I'd make numerous copies. I'd mail a bunch of them to the media, also to family, and some I'd mail to random civilians just in case I got brainwashed by the MIB

And of course I'd post it on ATS as well (since its the only site I frequent on a regular basis).


After that, I don't care what people think. Haters will be haters. Nothing short of a personal interview, or a trip around the universe, or possibly a full planet wide integration (if they plan to stick around) will convince some people.

Originally posted by JibbyJedi
Yet another thread I posted that picture on that goes silent about it.


firstly does your last bit mean its not real? and your just playing with us?....im not too sure. ill assume was a typo and you are still claiming it as proof, people are silent because its a light in a dark background, it seriously could be a very large amount of things, in no way at all is it proof of anything at all, not saying you are lying maybe u did see what u claim but that photo is in no way at all proof, but thanks for taking the time to share it with us.


sorry Jibby, but there's really not much to comment on in regards to validity... it just looks like a blur... I could probably recreate it in photoshop in no time

Originally posted by JibbyJedi
Yet another thread I posted that picture on that goes silent about it.

It's definitive proof of a light in a still frame, you're right about that. There is not enough to see there in order to 'debunk' it, the answer can range from a reflection of a light on glass to a UFO.

TIP: How about burning it on a DVD?!? You can keep it safe in a closet or any other storage space you have, it would last longer then any harddrive.

Sorry but that still you have is not proof of an UFO regardless of it's origin, it's a light against a black background nothing more. Your video would probably be the same light but moving since this is a still of it you say.

Depends, if it turns out to be a military craft, there isn't really much to bring out it's not the smoking gun.

If it where Alien in origin, i would probably try anything to conact the beings instead of publishing 'yet another' video on youtube. Because of the so many fakes out there people can't even conclude it's real or not.

about 10 years ago almost EVERY video out there was concidered real untill debunked, now it's the other way arround because of cheap CG and that people seem to love it to hoax people who really are searching for the real deal.
edit on 17-4-2012 by Required01 because: (no reason given)