Did a Drone Shoot Down North Korea's Missile?

posted on Apr, 16 2012 @ 08:32 AM
link
There is speculation that North Korea's missile was not just garbage and fell to the sky but might have been shot down by a UAV. In a recent piece, there is technology out there from drones that could be used to shoot down a NK missile in the boost phase when it just launches, killing it quickly before it moves at a very fast speed. Is this possible? You be the judge:

posted on Apr, 16 2012 @ 08:51 AM
link
IMO, if NK's missile was shot down, their new 'dear leader' would not be quiet on the subject. All kind of threats and rhetoric would be coming out of NK. When Japan initially announced that they would shoot it down should it enter their air space, NK said if accomplished, it would be considered an act of war.

Not one missile that NK has launched in the last fifteen years or so has managed to do anything BUT break apart shortly after launch. There is no reason to think this one was any different.

The next threat to watch is whether or not NK conducts another nuke test. They usually do this after a failed launch in order to save face.

It was ALIENS. Yes, I'm serious.

It is well documented that UFOs have been seen and have played a part in disarming nukes/nuke facilities for decades.

I would not be surprised if this was the case with the NK failure too.
edit on 16/4/12 by galactictuan because: (no reason given)

Originally posted by galactictuan
It was ALIENS. Yes, I'm serious.

It is well documented that UFOs have been seen and have played a part in disarming nukes/nuke facilities for decades.

And yet they sat by and did nothing while the USSR built thousands of nukes? I'm not buying it. Personally I think the North Koreans are just incompetent, simple as that. By the time they figure out how to reliably launch and fly a missile the rest of the world will have moved on to some new and improved technology for destroying ourselves.

posted on Apr, 16 2012 @ 09:42 AM
link
I suspect the NK rocket was helped to deintgrate by one of the plane or ship based lazer systems that the US has been working on for a long time now.

The Dear leader and his crew, probably would not shout about it, becuase it shows weakness on thier part, and they would have to back up any threats they make(at least to a limited extent) , And I doubt they really want to do that.

Plus. if it was infact a lazer based system took it down, there ain't much they can do about it, and it effectively grounds their future launch plans. It best they blame it on a technical failure. Its the lesser of 2 evils.

"The Boeing YAL-1 Airborne Laser Testbed, (formerly Airborne Laser) weapons system is a megawatt-class chemical oxygen iodine laser (COIL) mounted inside a modified Boeing 747-400F. It is primarily designed as a missile defense system to destroy tactical ballistic missiles (TBMs), while in boost phase. The aircraft was designated YAL-1A in 2004 by the U.S. Department of Defense.[1]"

posted on Apr, 16 2012 @ 10:56 AM
link
The rocket soared for at least 81 seconds before it failed, so I'm guessing that it was at an altitude too high to be impacted by a drone or anything a drone could fling at it.

The 90-ton rocket launched at 6:39 p.m. EDT, but 81 seconds into the launch, the U.S. detected a substantially larger than expected flare and by ten minutes after launch, the rocket was no longer on several radar screens, U.S. officials said.

Very doubtful that anyone helped with the rocket failure. I think folks were standing by to take it out only if it were heading toward land, and it didn't seem to be on any track for that.

At no time were the missile or the resultant debris a threat.


I can't be positive, but I think this is a rare photo of Kim jong-un reenacting the last seconds of the doomed rocket... 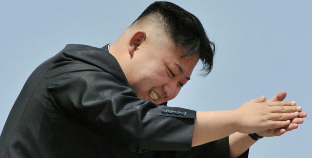 posted on Apr, 16 2012 @ 11:00 AM
link
It must be very frustration for the North Korean dictator and his sycophants to watch - something they have actively promoted as the cutting edge of his nations endeavours - crash into the sea. Just think how many more North Koreans have starved to feed this folly.

It was not a drone that caused it, nor a UFO. It was North Korean craftsmanship which has been fostered and nurtured on a diet of perpetual famine, abuse and indoctrination.

Sad day for Kim Jong-un, but good day to humiliate the tyrant.