What's wrong with this moonlanding picture?

posted on Apr, 15 2012 @ 05:43 PM
link
Found this image while using the phone-app StumbleUpon. First I just thought, "Ahh, what a nice picture. But then I noticed that the right side of the image looks weird. Like if a filter of some sort have been used but doesn't cover the whole image. Why would there be an effect filter applied to the image in the first place?

Anyone have a good explanation why this is?
edit on 15-4-2012 by Akezzon because: spellcorrected

posted on Apr, 15 2012 @ 05:53 PM
link
"Does look interesting, though the droplet like shape of the miss coloration makes me think of sun glare."

Never mind, i see the solid black divide. I have no explanation, though i know NASA did use filters on most their pictures to clear them up, that is no secret.
edit on 15/4/12 by WiseThinker because: (no reason given)


Edit: No, that wouldn't make sense....If it were that, you would be seeing the left side of the picture on the next frame...Not a continuation....


Lens flare/glare is entirely consistent with lighting and shadow positions.
The is a very common 'effect' produced where a bright light source refracts and/or reflects at certain angles off the camera lens and internal lenses.

posted on Apr, 15 2012 @ 06:19 PM
link
maybe it was just used to enhance the image since on the other side of the line it's somewhat grainy and darker


Are your talking about the lens flare? There is a circular lens flare, near the right-hand side of the image.....part of the circle is seen only because the background is the shadow being cast by the LM. The rest of the lens flare circle is "washed out", and not noticeable.

Also, without having to search through the archived images, it would be nice to know the Apollo magazine, and image number. In addition, based on the aspect ratio.....this "harvard" image is either cropped (top, bottom, or both) or (more likely) has been "stitched" together from more than one original image....to give it that "panorama" aspect ratio.


there is a dark unfiltered stripe on the right hand side of the photo top to bottom..

and as always the space in the background has been effected..
some would say to remove stars showing constellations & thereby avoiding any possible location identification.

and as always the space in the background has been effected..
some would say to remove stars showing constellations & thereby avoiding any possible location identification.

NO, "not always" as you assert, are stars "removed" This shows a continued ignorance of photographic techniques, and exposure settings, and light levels.

Also it is extremely laughable to claim that it is to "hide" the constellations!!! If you think that the mere distance of ~356,000 to ~406,000 kilometers from Earth would have ANY appreciable effect on the way the constellations appear in a photograph, then I suggest you go back to understand the term "parallax". If that hasn't sunk in yet, then consider the Earth's orbit.......and the distance that WE move, during the course of one year.....and then come back and see if you can tell if the constellations change, as a result.

Now, your negative processing of the image (photoshop??): Useless, again, because this is NOT an original image!!

It has been altered, in some way....but, for the purposes of whomever used the original in order to produce this one.

Originally posted by purplemer
Why is the flag moving. I never new there was wind on the moon...

The "dark unfiltered stripe on the right hand side of the photo top to bottom" from reeferman's post is the seam between AS11-40-5886 & AS11-40-5887. From an artistic standpoint, the quality of AS11-40-5887 is so poor I'm surprised the guy who made this composite included it (and didn't cover the seam better). perhaps he wanted more of the LM to show.

In answer to purplemer's question, "Why is the flag moving?" It's not. If you look at AS11-40-5885 & AS11-40-5886, which were taken a few seconds apart, the wrinkles on the flag have not moved at all. It's just the way the crumpled nylon is hanging from the horizontal cross-bar.

Hope this helps.
edit on 15-4-2012 by Saint Exupery because: improved clarity & context


yes always, .. the "sky" from the lunar surface is wiped clean always..

some black spot, a smudge here & there..

this is already admitted for "National Security"..

so what are you scoffing at?

you should be pondering the Why..

and its never the original film now.. is it?

you can even see where the suns rays have been scrubbed in the shadow on the surface...
on all the photos.. not to mention the "sky"

but you know best.. don't you? 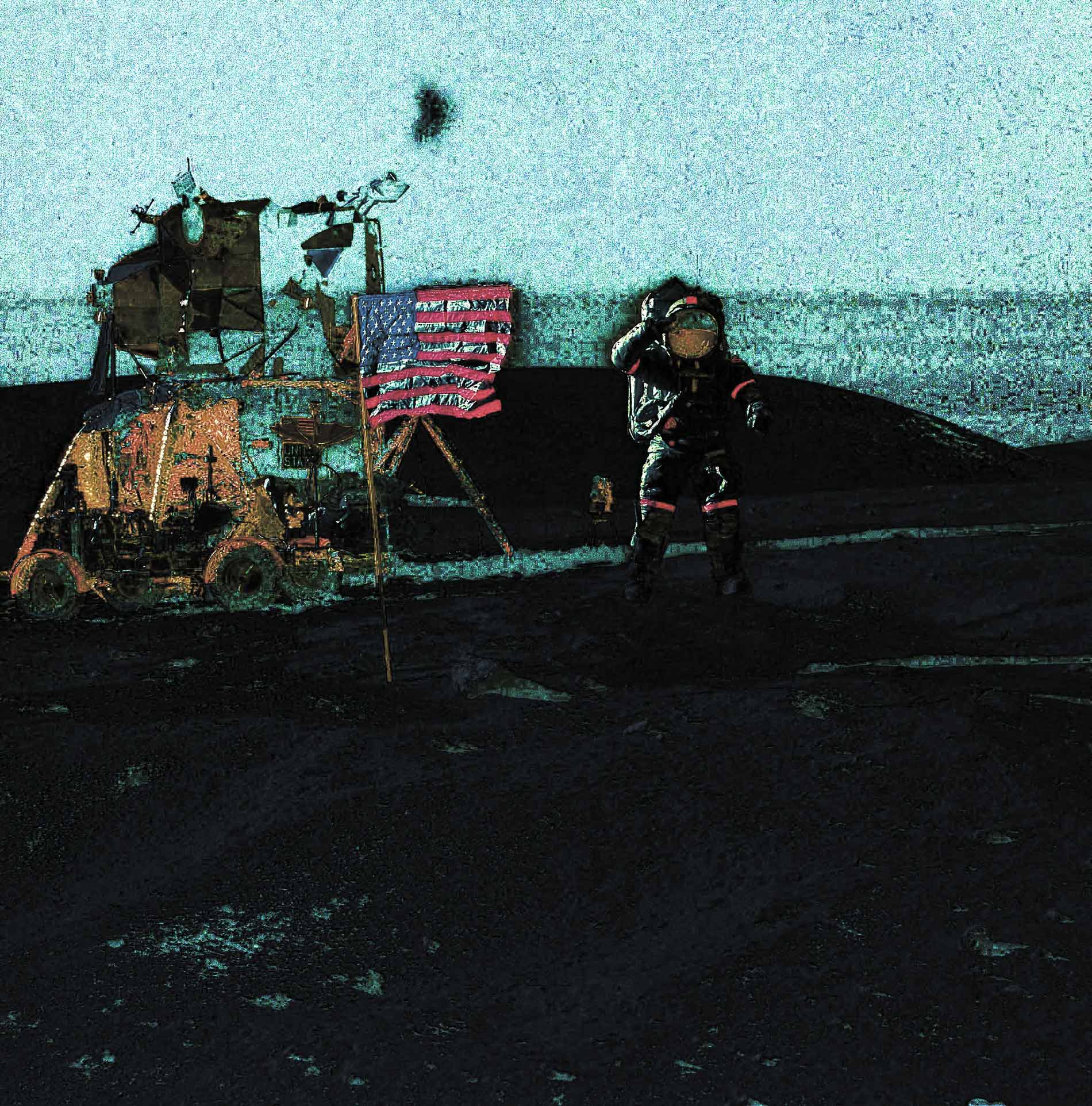 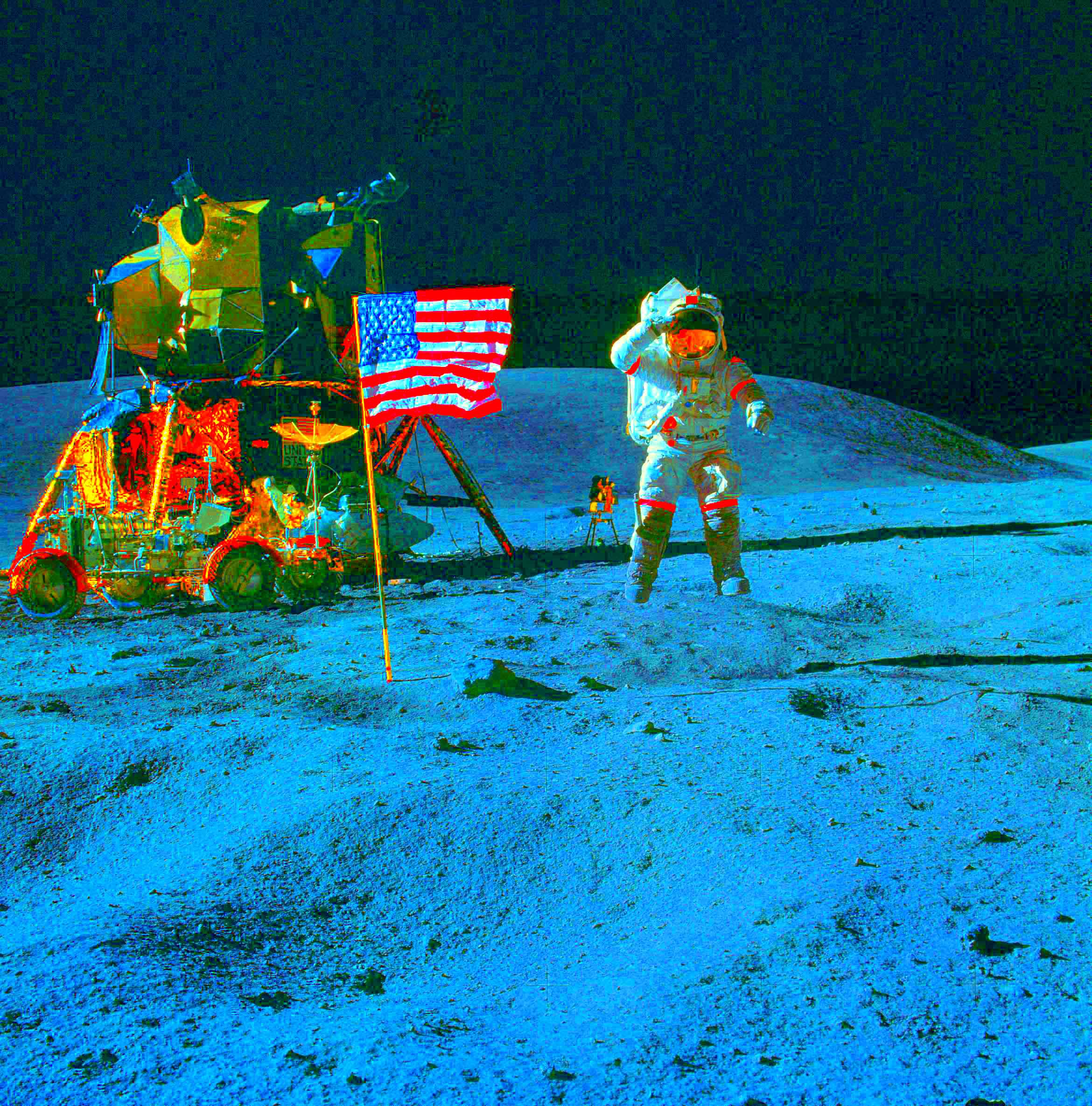 they sure did great work back in the day..

posted on Apr, 15 2012 @ 11:46 PM
link
Reason I reacted to it was because the image seemed to have better quality in that small area on the right. And, no wasn't talking about the flares, just the right hand side. It's almost as if they have added a lot of dust and grain to this image and turned up brightness and lowered contrast. I was just curious why one would render an image like this.


Sorry, but you are just making things up, now?:

the "sky" from the lunar surface is wiped clean always..

some black spot, a smudge here & there..

this is already admitted for "National Security"..


Care to cite an actual source to back up this assertion?

The images you used in this post.....what is their provenance? Image numbers, so people can go to the originals, and see for themselves. Because.......depending on where you obtained them, then can have been altered by third parties for many, many reasons. This has long been discussed here on ATS.


and its never the original film now.. is it?

No, all of the images from the Hasselblad cameras can be found here:

(NOTE: The above resource includes way, way, way more than just still photos from the Hassies, too).

and as to your smart ass parallax idiotic comment..

Huh? (again)...you brought up the constellations. Did you not mean to infer that the Lunar EVA photos were taken on Earth (as is the claim of many a "Moon hoax" believer)?? It sure seemed so....by inferring that they had to "ide" the constellations, and this infers that somehow the arrangement and relationships of the stars to each other, as we see them in the sky, would be "different" by moving only a few hundred thousand kilometers to "one side". This is what is known as 'parallax'.....and it is a function of math, geometry and trigonometry. The nearest stars (Alpha Centauri A and B) are on the order of 4.3 LY away. You can work out the math, if you want.....then draw an isosceles triangle with one point at Alpha Centauri, and the base two points (Earth and Moon), using the distances involved....say, 400,000 kilometers for the base (Earth/Moon), and the distance to Centauri being the two sides. Then figure out that, at that distance, moving between Earth/Moon would affect your visual perception of relative movement of Centauri basically ZERO....that is one way to understand parallax.


AS TO your YTube video of Donna Hare?? She has been debunked long ago.....she travels on the *UFO* circuits, repeating her nonsense.....and in essence, her claims are moot, since she joined NASA after Apollo lunar missions had long ended. Even she admits she worked at NASA between the Apollo and and Space Shuttle programs!!

But, twisting the facts is par for the course, in the 'world' of "hoaxism".......and those 'beliefs'. In other words.....YOU have been lied to, but not by NASA (Not on this topic....the Lunar Apollo missions).


OK....I searched for you, and found the source to the original photo. Fortunately, being somewhat familiar with the missions' EVAs, I presumed that was Apollo 11, and Aldrin, because I recognized the Solar Wind experiment, and the positioning of the flag. (I see now that it is not "stitched" together of separate images.....it is one image, cropped top and bottom).

Here is the LINK Just scroll down the page about two-thirds, until you see the Magazine #40 series of photos.

The image you posted in the OP, located from the Harvard source, appears to be (from reading the link) designed as a computer desktop background, or perhaps a screensaver, or something of that nature.

Which means, it has been modified by others, and is not the original from NASA's sources.
edit on Mon 16 April 2012 by ProudBird because: (no reason given)

Well, thanks for the time spent to check it up.

Once I went to check it, I see that it only takes you to the "main" page....perhaps I didn't copy the correct URL....in any case, follow the same link and (if you haven't figured it out already), just click on 'Apollo 11' in the upper left part of the main screen....this will bring you to the archives of the A11 photos.....as described above.....

EDIT: More just for Apollo 11....from the ALSJ, the specific *sub-menu* listing for Apollo 11 (there are other missions details, at the ALSJ site Home
Page).

ALSO, navigating the ALSJ sometimes seems to present obstacles....use the 'LINK' to the 'Apollo 11' sub-menu', and at the top there will be links to the other five landing missions. If there is difficulty, use an Internet search engine to find them......