Neil Young Song That Applies To Most of Us

page: 1
22
<<   2 >>
log in
join
share:
Corruption Exposed
+1 more
posted on Apr, 14 2012 @ 06:40 PM
link
I was lucky enough to have a few hours to meet with my father today who is a great person and is an inspiration to me and had helped me through hell. Most of my opinions are based on the logic he sent my way as I grew up and one of his favorite artists is Neil Young, and one of mine as well. We got to see Neil Young live in 1997, and this song is a lot more recent but hanging out with him tonight made me want to post this video. I have a step brother who was wounded by an IED in Afghanistan and a blood brother who is enlisted who will most likely serve one of these bloody campaigns sooner than later so I hope this all stops,

This video is old, but applied to now days as well, and we all need to think a little. So don't just think it;s about Bush,k it's about any other idiot that runs which ever country you live in.

All nations are serving wars that mean nothing to the regular citizens, but benefits the fools who make our laws and tell us what is right and wrong.

We should be sick of our family fighting these corporate battles that help no one but the rich.


I'm glad you agree and it's nice to see similar opinionated people.

IDK if you are Canadian, but let's impeach Harper for lying!

Originally posted by Corruption Exposed
reply to post by artistpoet


I'm glad you agree and it's nice to see similar opinionated people.

IDK if you are Canadian, but let's impeach Harper for lying!

No not Canadian - have Canadian friends though.
I am UK we have our own liars running things for the same puppet masters here


Thanks for the response, I agree with the message too. And trust me, it's not my style as I'm into the chemical induced music which T and C won't allow me to discuss

The thing is though, this old bat Neil Young, has had it down for years and people should pay attention to what he says. Even though he has had aneurysms he still makes sense.

We all make sense if we sit down and listen to each other, and share our opinions, I'm sure the most of us aren't that bad at the end of the day.
edit on 14-4-2012 by Corruption Exposed because: (no reason given)

Originally posted by crazydaisy
Neil Young fan here and had the pleasure to meet
him in the late 70's.

Nice that you met Niel - I saw him on his UK tour in a place called Newcastle many moons ago
The Eagles were the warm up act - back then they were the new kids on the block.
I went to the venue with my girlfriend - we did not have tickets and begged to buy 2 - A guy came up to us and said - You seem so keen to see Niel Young here are 2 tickets for free -
edit on 14-4-2012 by artistpoet because: (no reason given)

Neil takes you for a ride on his guitar when he plays.

He set the standard for honest music!

Eff these puppets who run our countries!

"protects and aids terrorists, including members of Al Qaeda"

These bastards need to die.


LUcky you for meeting him, I got to see him play live and that dude put on a crazy show for an old man and put all these younger rockers to shame.

I consider myself lucky to be able to I got to see this man play in person, never met him personally though so you are very lucky. I hear is a pretty cool person in real life too.

His music seems to be just as applicable today as it was yesteryear. Some songs more than others.

Thanks for bringing some Neil into my Sunday morning.

posted on Apr, 15 2012 @ 08:47 AM
link
Hi again, Corruption. Popping on a moment just to say thanks for the song...Of course I should have mentioned that in reading your post, ''Old Man'' came to mind. Again, great post.

This one is for you

So happy for you guys...Glad some you got to meet and see him in concert - Sounds awesome! Wish I could have been fortunate enough but thankfully we have his recordings ..and they are classic!

Like CExposed says, they have meaning for today. We all should do like the Beatles and "Come Together'' ,so the OP song could happen!

posted on Apr, 15 2012 @ 09:52 AM
link
Thanks for posting and yes perfect for a Sunday morning.
Neil is one of the reasons I luv Pearl Jam. Its artists like those who get the real picture, and aren't afraid to display it.
In Canada, our admiration of Neil runs deep. In '11, he beat out Bieber as artist of the year at the (Canadian national music awards) Junos,
- also won the Adult Alternative category in '11, here he is at the media scrum. I was looking for his acceptance speech where he slammed the music industry, but this is a decent clip of Neil, for those who don't know
Where would we be without artists like these?


Just wanted to comment on this thread since I had the amazing honor of PERFORMING WITH HIM a few years back!

Neil released Greendale, an album he recorded with Crazy Horse members Billy Talbot and Ralph Molina (So yeah, got to jam with those guys too!!!)

Neil imagined the album as a storyline, and it loosely revolved around the murder of a police officer in a small town in California, and the subsequent effects on the townspeople.
Under the pseudonym "Bernard Shakey",
Neil directed an accompanying film of the same name, featuring actors lip-synching to the music from the album.

He toured extensively with the Greendale material throughout 2003 and 2004, first with a solo, acoustic version in Europe, then with a full-cast stage show in North America, Japan, and Australia.

I was part of that "full-cast show".

I danced/sung back-up for a series of his concerts during his Greendale Tour of 2003-2004.

And it is BY FAR one of the best times of my life!

How I got that opportunity is a really long story- but basically a friend of mine introduced me to a friend of a friend of the producer of that concert,
who is a legend in his own right-
Russ Tamblyn-
most notable for his role as the original Riff of the Jets gang in West Side Story.
His daughter is Amber Tamblyn, who starred as the lead in the hit series Joan of Arcadia, one of the leads in Sisterhood of the Traveling Pants, etc.
Amber, as well as Neil's daughter, also named Amber (Amber Jean Young is her full name) performed in the shows.
They were both so cool and down-to-earth....and Amber Tamblyn had JUST found out she got the lead in Joan of Arcadia THREE DAYS before I first met her for the concert rehearsals.
I was one of the first people she told, and she and I had this long, teary, heart to heart discussion about life and pursuing dreams and all that- it was a wonderful conversation to say the least!

I'll never forget the night before the first show at dress rehearsal, everyone was pressed for time because of weather issues (the venue was at an amphitheater) so we all got about 20 minutes to break for dinner.

I sat next to him shoveling a (surprisingly yummy!) burger down, and he and I just cracked smart ass political jokes and he told me that I reminded him so much of his daughter- not looks, but my personality.
It was BEYOND surreal!!!!
And my parents were beyond jealous lol.

Neil Young is such a chill fantastic human being!!!
And a true patriot
CHEERS MR. YOUNG!
Here's us at one of the rehearsals with Russ Tamblyn (the tour producer)
I'm sitting to HIS left (YOUR/VIEWERS right)- and my friend who introduced me to the "friend of a friend of the producer" is standing behind/above me with the white tank on 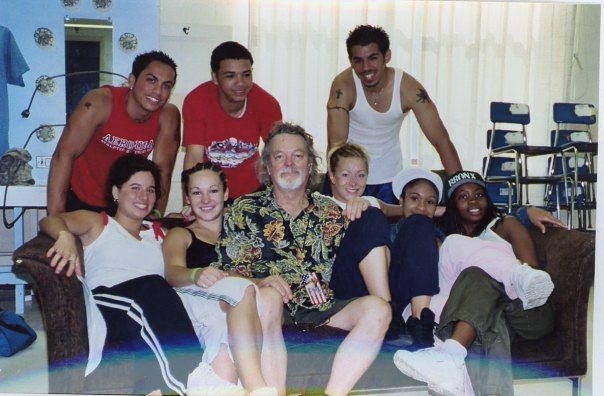 
What you have posted is so true..when will it ever end. But I feel sure it is never in my life time.
Also a Neil Young fan. I love his Heart of Gold.


Thanks - great story
Keep on dancing