Did The U.S. use an Airborne Laser to Shoot Down the North Korean ICBM?

Certainly, a successful launch of this so-called peaceful test of a 'satellite delivery system', would have ratcheted up nuclear tensions dramatically, as it would have given North Korea's 'dictator in diapers' the means to deliver nukes anywhere in the world. Japan and South Korea both threatened to shoot the rocket down, should it stray over their airspace...with North Korea retorting that such action would constitute an "Act Of War".

So when I saw on the news that this multi-stage test rocket had exploded in flight, falling harmlessly in the ocean, I not only breathed a sigh of relief, but immediately wondered if perhaps...just perhaps, the U.S. Boeing YAL-1 had secretly played a roll in taking it out.

All is supposition on my part, but if true, with the wreckage being unrecoverable for inspection and the YAL-1 being able to use 'off-radar' laser and platform to shoot it down, then it would be virtually impossible for North Korea to trace this back to the U.S.

I assume that the YAL-1 may even be an unveiled early prototype of some even more advanced airborne anti-missle laser system in the U.S. covertly-deployed inventory but, let's face it, we all know that America has this hyper-advanced technology currently available...and should it ever truely need to be used under extreme circumstances, through covert means and with guaranteed impunity and deniability of complicity,...it most certainly would be used.

Perhaps, this ICBM test actually DID fail naturally due to North Korean technological incompetence...but with the stakes so high on this launch, did the U.S. and it's allies in the region dare rely simply on that?

posted on Apr, 14 2012 @ 12:41 PM
link
I do believe that this is possible.
However, It being their first launch could have been the reason as well.

posted on Apr, 14 2012 @ 12:42 PM
link
You could also do this with HPM. We've got test beds that can shoot down even very fast moving missiles by boinking their electronics. With an ICBM you'd have to catch it in the launch or boost phase. Yay, Raytheon.

posted on Apr, 14 2012 @ 12:42 PM
link
This would make sense, but the fact that every other launch failed prior, leads me to believe it was doomed without intervention. I really don't think they US would shoot down their rocket/missile, and withhold the food aid. Then again, the states are pretty evil.


Actually, the report that I first heard via Brian Williams and NBC Nightly news was that after the initial separation the secondary booster failed to ignite, caught on fire and then fell apart as it fell into the ocean. Not sure if totally accurate, or if the laser technology in question would be capable of causing such a scenario.

I myself come from this school of thought. 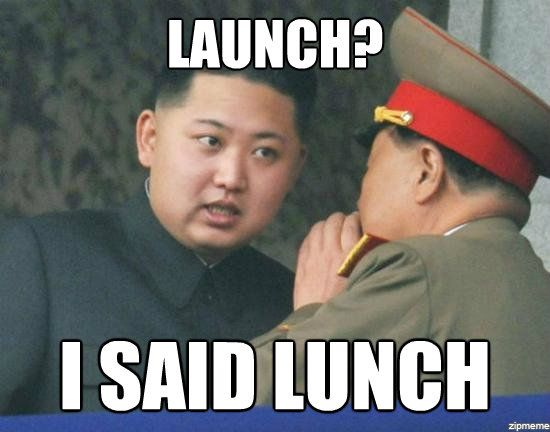 
Good point about the previous failures...but with the stakes so high on this particular launch, I just wondered if the US could afford to count on a natural failure...perhaps we had the lasers standing by as a failsafe contingency if the missle didn't fail on it's own merits.


Actually, the report that I first heard via Brian Williams and NBC Nightly news was that after the initial separation the secondary booster failed to ignite, caught on fire and then fell apart as it fell into the ocean. Not sure if totally accurate, or if the laser technology in question would be capable of causing such a scenario.


You bet it could. That's actually what you'd expect to see - deflagration of the second stage would be a good place to do it, or a rupture of the first stage after it's clear of the ground. You generally get deflagration failures when it's a big IR laser. A reason to wait for the second stage is that you do it when there's a lot of stress on the system, somewhere around max-q, so that if you DO start a tear or buckle it'll come apart. A reason not to is distance - the farther away, the longer you have to hit it.


What are you talking about didnt you read there paper it was a major success.

Democratic People's Republic of Korea would like to announce we successfully launched our Taepo Dong-2.This is a glorious moment for the people of Korea in our on going effort to use satellites to map the ocean floor.

See its all perspective

Now for a serious note Its not easy launching a rocket there was several mistakes made by the US and Russia. And North Korea doesn't have the ability to successfully complete a rocket program. And about the threat they pose its a joke it takes them 3 days to prep a rocket in a war that is just not practical. They have no guidance systems to speak of this is all propaganda to say hey look at us. Theres no need to shoot them down they just dont have the capability to make a rocket even if they get a success its a fluke and next time go right back to square one. It doesnt take a rocket scientist to realize they are absolutely 0 threat and incapable of creating a successful launch and there nuclear program is a joke.So theres really no need to make them fail they do quite well on there own.

So, essentially, the way in which the missle supposedly ignited, exploded...AND crashed into the sea, outside territorial boundaries...is exactly the way it should have...were it to have been taken out from a distance by an airborne laser platform.


The news never said it exploded. They said when it went to the 2nd stage (where the rocket splits up) it failed and just fell to the sea. Now if it did explode yeah I would say a laser could be the cause.

Wouldn't it just fry the circuits and fall into the ocean then ?

isn't that the theory behind what the lazer is supposed to do ?

glad US didnt cause any casualties this time around, though


Wouldn't it just fry the circuits and fall into the ocean then ?

isn't that the theory behind what the lazer is supposed to do ?

Not usually. Depending on your design, you're either trying to knock dents in it using plasma bloom/reverse Bremstrahlung, or you're trying to heat it to cause softening/collapse or deflagration of the explody bits. If you want circuit frying, you generally use HPM, although the EM radiation from a plasma bloom can also be made to cause damage, but that's new and tricky and fraught with problems yet.

posted on Apr, 14 2012 @ 04:58 PM
link
It seems to me that aside from delivering a monumental blow to North Korea's military bluster and technological prestige on the anniversary of it's beloved founding dictator, this failure gives the US a blame-free way to pull food shipments which would only have continued to prop the decaying NK regime.

Subliminally and tactically speaking, it is in the US and the world's best interests to keep the North Koreans guessing as to whether the US shot down their ICBM, or not.

They (North Korea) will finally understand the futility of continuing to pursue their costly and destabilizing program of developing an ICBM system for their nukes, knowing full well that the US will only continue to consistantly destroy them with impunity.

This also sends a message to Iran, as well.

The truth is that the world will never know for certain if the US shot the North Korean ICBM using advanced laser technology...because, for geopolitical and national security reasons, it will never be admitted to publically.

Behind the scenes, however, the possibility that the US has and will not hesitate to employ these advanced defense assets when necessary, will definitely continue to be hinted at.