posted on Apr, 14 2012 @ 02:41 AM
link
Being the good (obedient)tax payer that I am, I recently had the pleasure of seeing the assessment on my home increase. Anticipating a significant increase in my village taxes, I plan on appealing as much of the increase in my taxes that I can. So I'm doing my home work and retrieve my previous appraisal from when I originally purchased my home. So I'm reading the appraisal and I reach the section on the condition of the site and what do I see? FEMA! Right there in my appraisal! FEMA has turned into such a dirty four-letter word that I almost fell over.

Well people, there you have it...an insidious example of FEMA in our everyday life! Hmmm...parcel map #'s, firearm/weapon registration #'s...sounds like a recipe for "Let's see, who do we need to visit first in case something happens kinda list?" 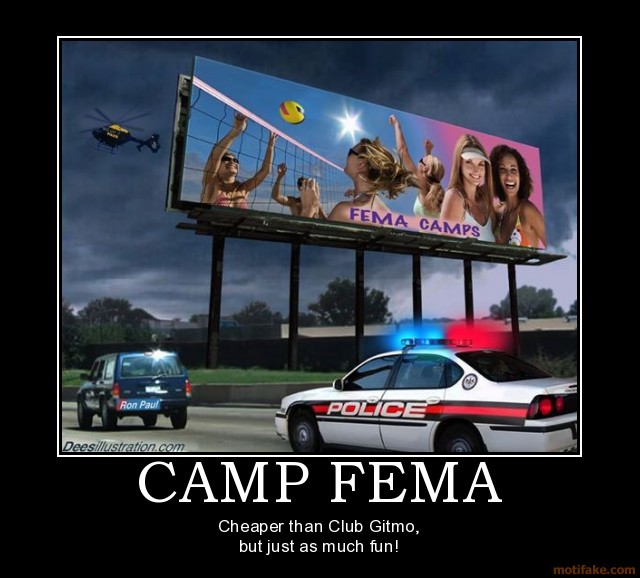 posted on Apr, 14 2012 @ 07:21 AM
link
What you are looking at is the National flood insurance program and due to development and changes in the landscape they upgrade the flood maps a few years ago. Those who live in flood prone areas must purchase flood insurance through the program. It sounds like your home doesn't qualify as being in a flood-zone (lucky you).
It's actually the 1 thing FEMA does that helps people. Our home was flooded back in 04 and we could have gotten money to fix the damages but I decided to do it myself, Our neighbor got a new heat pump and underfloor insulation put in for free. I just hosed out our heat pump and replaced the insulation myself as I hate asking the government for anything.
No conspiracy here unless you include all the beach homes of the rich (like John Stossels) who get their homes replaced when a hurricane hits even if they can afford to rebuild them themselves.


No conspiracy here unless you include all the beach homes of the rich (like John Stossels) who get their homes replaced when a hurricane hits even if they can afford to rebuild them themselves.

Why should rich people not claim insurance?


Well my friend there was a FEMA debacle in Buffalo back a couple of years ago when they updated their flood map. There is a creek in South Buffalo that comes from outside the city and winds through the city to empty in Lake Erie.

This creek used to be prone to flooding during the spring thaw, However the corps of engineers did flood control work on it and the flooding was pretty much eliminated. Then in comes FEMA and their assessment said that people in one of the poorer parts of town along the creek, where the flood work had been done, were now required to purchase flood insurance. Although people along a part of the creek where no flood work had been done, were not required to purchase the same insurance. Oddly this is in a more affluent part of the area. In this area the creek still floods occasionally due to Ice dams. The part they were requiring the residents to buy insurance in hasn't flooded since the work was done to it.

To me this sounds a bit suspect. Since they knew about the flood work.

The folks involved fought them in court and I think they got the ruling reversed. However the areas where the flooding still occurs , still don't have to pay.

Knowing how crooked politics are here in Western New York, I have to wonder just what this was all about. I'm not sure if this has happened in other areas or not, but it does make me wonder.
edit on 4/14/2012 by lonegurkha because: (no reason given)

posted on Apr, 14 2012 @ 12:17 PM
link
FEMA should practice working on disasters rather than making it hard on home owners. Insurance companies have already refused Tornado victims the right to renew the insurance and left many states all together and this doesn’t help any!


FEMA was begun under Jimmy Carter and originally they only covered homes destroyed by hurricanes. The thing about that was nobody paid any premiums. It was started to help rich beachfront property owners replace their vacation homes even though many could afford to rebuild without help.
The flood insurance programte came about because private insurance companies wouldn't cover many homeowners in flood-prone areas.


Gotcha. So my FEMA flood zone was a C. I looked it up and its a minimal flood zone. Located about 30 to 50 yards south of my house is a canal. It has a slightly higher elevation than my house because of the bank. It never floods and is filled more with garbage I think than water! lol My basement floods more during a good rainfall because its an old foundation and I need to place a sump pump down there this summer.


Our house never flooded until they started to build a shoping center in an area that drained in to a tiny creek in our backyard. They had just completed leveling off about 22 acres of lot, just bare dirt sitting there when hurricane Gaston came through and dropped over 12" of water in less than 3 hours.
Suddenly, a chocolate river of muddy water encircled our house and we had to grab the cats and leave when a railroad berm collapsed.
We were in a 500 year floodplain supposedly at the time.
They updated the maps soon after and put us in the 100 year floodzone after that.
I hope to never go through that again.
We've since moved to another town and higher ground.
edit on 16-4-2012 by Asktheanimals because: (no reason given)