posted on Apr, 13 2012 @ 11:46 PM
link
On July 15, 2003, a huge fireball was witnessed over Elma, Washington (State). It exploded and part of it landed in a high school athletic field. 2 Boys who were walking down the street near the school were closest to the event and they went over to where they had seen the fireball fall. Below is their initial account:

"We were just driving down the road, and I just saw this big, bright flash," the 18 - year - old said. "At first, I thought it was a shooting star or a falling star or something. "It looked like fireworks, but it had a tail about six or seven - feet long." Reed said the falling rock appeared to break apart as it approached the earth, exploding before impact. The young men decided to investigate, and headed from the freeway toward Elma High School, where they believed the fragments struck. "We went out there and started looking around, and we saw a bunch of divot holes in the sand of the track out there," Reed said. "We looked for a while, then we went and got a couple of cops." Raney, 17, said he tried to pick up a piece of the still - hot rock and burned his hand. Soon police joined the young men's investigation, examining the pock - marked asphalt and dinged ground.

After all these years, there has never been a complete and satisfactory explaination as to what that object was. We have many samples. I purchased 100 of them or so a week after the event, as I am an avid collector. There was so much scientific analysis done on these objects, and still - The exact origin of these objects remain a mystery.


Some Scientists have called them "Earthite", which would be terrestrial material somehow put in space that fell back to earth. Others say they are "Geometeorites", which are produced when ball lightning charges soil and deposits it miles away from the electrical event. The scientific chemical analysis says they are not meteorites, but more like tektite glass produced from the melting of terrestrial material in a large meteoritic impact..... but where was the impact?

This is truly a cool mystery. i will present the evidence and let ATS chime in on what they think it is. There are alot of links, and also alot of lost links in some of the embedded data I will present, since the event is nearly 12 years old.

Here is the location of the event:

Here is a report from KOMO news in Seattle Wa, after the event took place
KOMO News article.

Some expert meteorite investigators and collectors, the Hupe Brothers, University of Arizona wrote up a number of initial reports for the "Meteorite List" Also noted NASA scientist Ron Baalke, also contributed to some of the following threads:

Report from Daily World on elma, with comments by Ron Balke, NASA

A Detailed view of recovered objects: 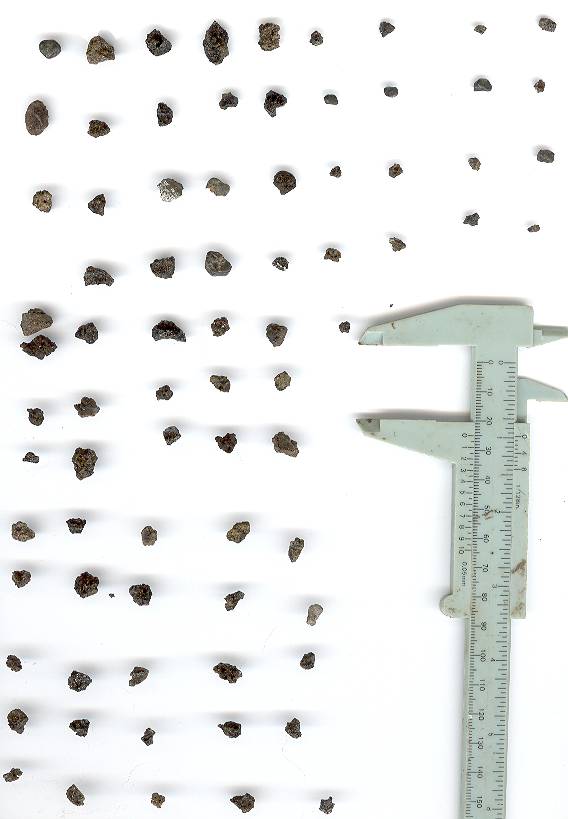 From My collection, detailed micrographs of samples. Note the fresh melted glass crust with embedded sand granules inside the material. Looks like a tektite outside, but inside, it is pristine sand grains... incredible. 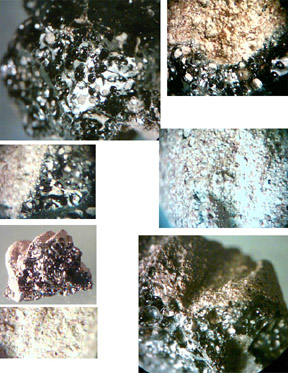 For comparison, these are typical tektites. They are austrailites.

Here is a chemical analysis done by a meteorite lab on the Elma objects: (sorry for the size) 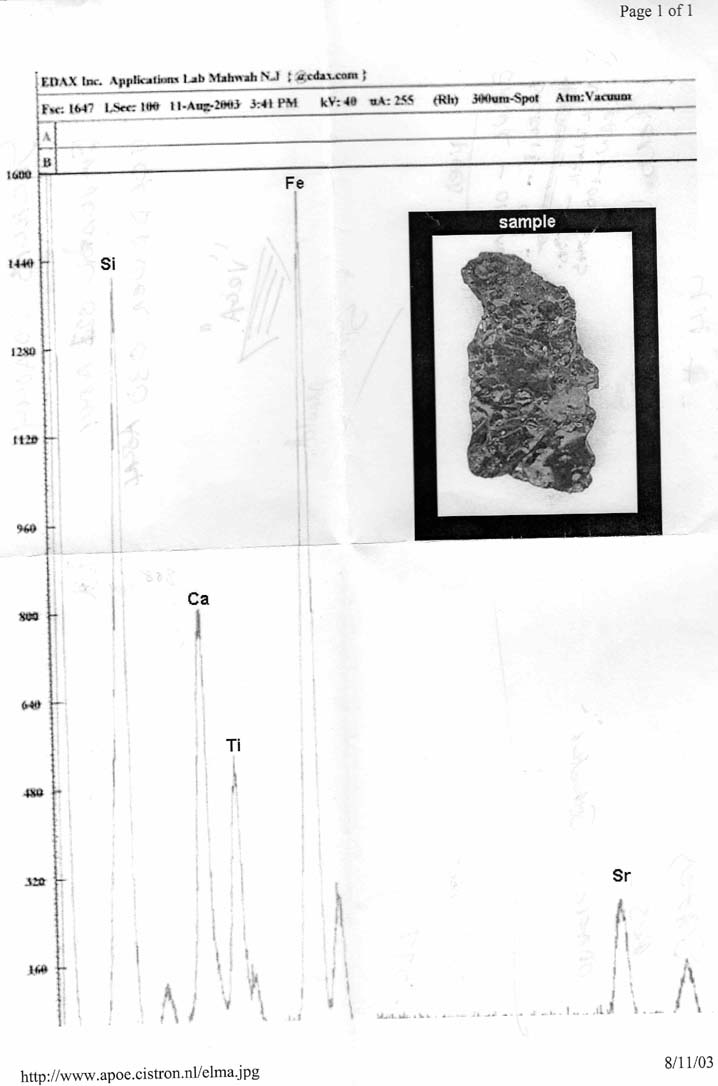 An original collection and synopsys by the person I obtained my samples from:

Analysis by another collector

There were so many different theories that cropped up in the year after this event. The Hupe brothers published a final finding, but the jury was still out as to what these objects really were.

Finally, for your extended reading, here is a huge report on the suspected existence of "Geo-meteorites". This is very controversial work, however it is a treasure trove of links and case studies in strange aerial phenomena. The work was done by Dr. A. Ol'khovatov, and is truly an impressive piece of research - You could spend days researching his write-ups and links. He also has an extended section devoted to the Elma event, it is about in the middle of the report. - Enjoy!

In depth case studies of possible Geometeorites, Dr A. Ol'khavotov

So, ATS, I hope you can have some fun with this. It makes for a great night of research and a very mysterious subject may get some new light with your added insight. Thanks for reading.

I am an avid meteorite collector and just love it when heavenly objects stump science. I have a few more strange object threads in the works, and will be bringing them out to ATS very soon.

Originally posted by charlyv
The scientific chemical analysis says they are not meteorites...

After a quick search though your links, I cant find any reference to anyone testing them for lunar origin (since these rare rocks are different than meteorites and more similar to earth rocks).
Has this been done?

posted on Apr, 14 2012 @ 12:05 AM
link
It's from a piece of experimental military airplane that they were testing, part of a weather manipulation tests....

In all seriousness, I was joking when I made the first comment, but now I'm seriously considering it! LOL

possibly chunks of whatever it is they were spraying(that solidified) up there...
edit on 14-4-2012 by MESSAGEFROMTHESTARS because: additional statement


Originally posted by charlyv
The scientific chemical analysis says they are not meteorites...

After a quick search though your links, I cant find any reference to anyone testing them for lunar origin (since these rare rocks are different than meteorites and more similar to earth rocks).
Has this been done?

Good question.
Yes, the chemical analysis kind or ruled it out, as far as what science knows today. Still, there are those that think this is indeed meteoritic, just something we have never seen before.

posted on Apr, 14 2012 @ 12:29 AM
link
gosh darn isnt it crazy the various different crystalline chemical compounds they are reflecto-irradiating our atmosphere, and what compounds and precipitates happen upon thermal reactions and such.

intriguining mystery, i would be shocked to hear this is every solved considering experts hav already ruled out metoerite - so what's left?

posted on Apr, 14 2012 @ 12:32 AM
link
It's pretty obvious that the material these guys gathered and "sold" was just the local sand that had been affected by the actual impact object. It's possible that what hit the ground was in molten form and left behind extremely small trace material / material not readily visible.

What you have there are globs of the melted sand / asphalt. Little wonder it tests as "terrestrial".

posted on Apr, 14 2012 @ 12:35 AM
link
I have absolutely no knowledge of any of this but THANKS!! You just gave me a weeks worth of new stuff to learn. Has there been any new information regarding the structure of these pieces?

Originally posted by BiggerPicture
gosh darn isnt it crazy the various different crystalline chemical compounds they are reflecto-irradiating our atmosphere, and what compounds and precipitates happen upon thermal reactions and such.

intriguining mystery, i would be shocked to hear this is every solved considering experts hav already ruled out metoerite - so what's left?

Please view my previous post, and watch the clip I embedded. LOL!

Originally posted by redbarron626
I have absolutely no knowledge of any of this but THANKS!! You just gave me a weeks worth of new stuff to learn. Has there been any new information regarding the structure of these pieces?

Oddly enough, nothing more has been significantly added in over 10 years. The report by Dr. Ol'khovatov is really the latest, and perhaps he added to it over the years, but i could not tell. I think his report is an absolute treasure trove of the subject of "unidentified objects falling to earth" The thousands of reports, pictures and links he has in there can keep us all busy for months.

posted on Mar, 1 2013 @ 09:59 PM
link
Excuse me for bumping one of my older posts. When I did it, there was so much other interesting stuff going around on ATS, that It got buried and not many people read it.

With the renewed interest in fireballs and meteorites as of late (good old Mother Russia), I think it is much more relevant now, and would be interested to see if there are any other ATS'rs out there that may have found out more information that they would like to share about mysterious falls, or new info about Elma itself. Thanks.