13 Freaky Facts About Friday the 13th aka paraskavedekatriaphobia 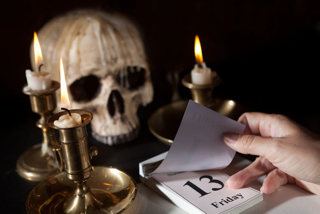 I did not even realize today was a Friday the 13th, but ran across this article of interest, and I guess superstitions are still alive and well in the 21st century.

2. If that scares you, you may have paraskavedekatriaphobia (also known as friggatriskaidekaphobia). Those are the scientific terms for fear of Friday the 13th. Triskaidekaphobia is fear of the number 13.

3. It's not clear when or why Friday the 13th became associated with bad luck. The association may be biblical, given that the 13th guest at the Last Supper betrayed Jesus. His crucifixion was the next day, apparently a Friday. Or maybe 13 suffers from coming after the more-pleasing number 12, which gets to number the months, the days of Christmas and even the eggs in a dozen. (There are also 12 signs of the zodiac, 12 gods of Olympus, 12 labors of Hercules, 12 tribes of Israel and 12 apostles of Jesus.)

4. Whatever the reason, fear of 13 has spread far and wide: Hotels and hospitals often skip the 13th floor, and even airports quietly omit gate 13 sometimes.

5. The next year in which we'll have three Friday the 13ths is 2015. They'll fall in February, March and November.

6. If you think your Friday the 13th is likely to be bad, be glad you aren't a 14th-century Knight Templar. On Oct. 13, 1307, officers of King Philip IV of France raided the homes of thousands of these Crusades warriors, imprisoning them on charges of illegal activities. Though the charges weren't proven, more than a hundred died of terrible torture, according to "Tales of the Knights Templar" (Warner Books, 1995).

7. Fittingly, director of psychological thrillers Alfred Hitchcock was born on the 13th — Friday, Aug. 13, 1999, would have been his 100th birthday. Perhaps aptly titled "Number 13," a film that was supposed to be Hitchcock's directorial debut never made it past the first few scenes and was shut down due to financial problems. He allegedly said the film wasn't very interesting. (Meanwhile, Fidel Castro was born on Friday the 13th, in August 1926.)

8. Why does the Friday the 13th superstition stick so firmly in our minds? According to Thomas Gilovich, who chairs the department of psychology at Cornell University, our brains are almost too good at making associations.

"If anything bad happens to you on Friday the 13th, the two will be forever associated in your mind, and all those uneventful days in which the 13th fell on a Friday will be ignored," Gilovich said in a statement. [13 Superstitions & Traditions Explained]

9. For pagans, 13 is actually a lucky number. It corresponds with the number of full moons in a year.

10. President Franklin D. Roosevelt is said to have avoided travel on the 13th day of any month, and would never host 13 guests at a meal. Napoleon and President Herbert Hoover were also triskaidekaphobic, with an abnormal fear of the number 13.

11. Mark Twain once was the 13th guest at a dinner party. A friend warned him not to go. "It was bad luck," Twain later told the friend. "They only had food for 12." Superstitious diners in Paris can hire a quatorzieme, or professional 14th guest. [13 Odd Occurrences on Friday the 13th]

12. Stock broker and author Thomas W. Lawson, in his 1907 novel "Friday the Thirteenth," wrote of a stockbroker's attempts to take down Wall Street on the unluckiest day of the month. Reportedly, stock brokers after this were as unlikely to buy or sell stocks on this unlucky day as they were to walk under a ladder, according to accounts of a 1925 New York Times article.

13. This fear of Friday the 13th can be serious business, according to the Stress Management Center and Phobia Institute in Asheville, N.C., which, among other things, offers therapy to help people overcome their fear of the freaky friday. Their estimates suggest hundreds of millions of dollars, up to $900 million are lost due to people's fear of flying or doing the business as usual that day, though that number isn't backed up with other estimates.


www.livescience.com...
Well hey, learned a new word today, paraskavedekatriaphobia , man is that a mouthful! There is much lore about the number 13 and why it is considered unlucky. I recall an architect doc from the 80's that examined an intentional effort to not have 13th floors in high rise buildings. Here is some more info:


Based on records of buildings with Otis brand elevators, as many as 85 percent of the high rises in the world don't have a 13th floor, says Dilip Rangnekar, spokesman for the Farmington, CT-based elevator maker.

Commercial realty brokers admit it's difficult to lease the 13th floor because, even if every corporate employee is not superstitious, clients may be. Who wants the hassle of directing a superstitious client to Suite 1300 -- or to the lobby if the client refuses to ride the creaky elevator up 13 floors?


realtytimes.com...
This stuff used to be taken pretty serious it seems, and I am curious about modern design and if this is still an issue? I hope you found this of interest and hey, just in case, be careful out there today!


I was wondering why buildings usually don't have a 13th floor. I guess now that makes sense to me sinse you probably would suffer concerning your bottom line because of superstitios people...

9. For pagans, 13 is actually a lucky number. It corresponds with the number of full moons in a year.

I like this day, always have. It seems to be the day that contains the most slapstick comedy, as you watch people fall on their butts, walk into poles, drop their phones in puddles, spill their coffee, and just have weird, wacky little misfortunes all day long.

I think they expect their day to go wrong, so it does.
I expect my day to go good, and it does.

My husband bought extra lottery tickets today, he knows this is one of my best days.

Yea I had not considered the idea was for customer/clients too. I am curious what today's architects attitude towards it are?

That's the spirit! I have a friend that swears it is his lucky number too. Yes, expectations surely play a part in all this. Good luck with the lottery ticket snowspirit.


Yes, that's it!
That's where it started.

posted on Apr, 13 2012 @ 02:25 PM
link
Great thread, I for one have had the good fortune to be born on a Friday the 13th, anyone else here also born on the infamous day? I don't consider myself to be unlucky at all but then again, I'm not really a superstitious person.


Yeah, I had never thought of that either. I would imagine architects today just live with it. I can't see them as a superstitios bunch myself. Kind of like us engineers...

It is an interesting topic, and I too found this info entertaining. I bet there are many folks that are very serious about this idea. My stepfather, who is a conservative and Christian, and generally scoffs at superstitions, once adamantly refused to take an apartment that was room number 13. I was 7 and I recall his seriousness about it.


Oh contraire Shadowalker, while that may be a main source, to say "nothing more" excludes many sources of this multi-faceted premise.


I note, for example, that the Gnostics of the early Christian era totted up 13 Conformations of the Holy Beard. The significance of the Holy Beard is not entirely clear to me, but I gather it's something you wanted on your side. Thirteen was also once associated with the Epiphany by mainstream Christians, the Christ child having received the Magi on his thirteenth day of life.

But 13's stock dropped like a rock in the middle ages. The proximate cause of this apparently was the observation that Judas, the betrayer of Jesus, made 13 at the table. Other great medieval minds, I read here, pointed out that "the Jews murmured 13 times against God in the exodus from Egypt, that the thirteenth psalm concerns wickedness and corruption, that the circumcision of Israel occurred in the thirteenth year," and so on.

Originally posted by Shadowalker
It was the murder of the Templars.


Specifically Jacques de Molay, who, with other Templar Knights, were arrested on Friday the 13th in about 1295 by agents of King Phillip the Fair. These events lead to the quick, movement of archbishop of Sens Philippe de Marigny whom sentenced 54 Templar Knights to be burnt at the stake in 1310. it is said that Jacques de Molay uttered a terrible curse on the Church and all of he offshoots and followers forever more. Jacques de Molay’s execution, while a matter of historical record, has been greatly embellished over the years to include the notion that the last Grand Master cursed the king and pope, who died soon after. They did die, but was it the curse? We will never know, will we?

To me, the number 13 is a lucky number. Good things always happen to me on a Friday the 13th. This morning, first thing, I got a call for a computer job that is already fixed, and made me good amount of money. My back feels good today, and I am going for a walk later this afternoon.


My friend's BDay is on the 13th too, and he also considers it his lucky number. Yea, perception plays a part for sure. Happy Friday the 13th...for the better

Thanks for the details autowrench, and I am glad to hear your back is well today! Hope you have a good weekend brother.

I did not know, thanks for the info

In Chinese languages, such as Cantonese and Mandarin, the number 13 can be translated as definately vibrant.

But don't tell anybody that. They're having too good of a time being superstitious.

Good and bad it seems and naturally it can be a matter of perspective. Funny how the more whimsical side of things can reverberate throughout cultures and stick.
I broke 3 mirrors a couple of years ago, so I am doomed for decades now, wish me luck.