Seems like the spirals are showing up once again , dont think its the North-korean rocket that fell after 1min.

What can it be? Fake ufo, Rocket test, Black hole theory again?.

2012 will be a interesting year 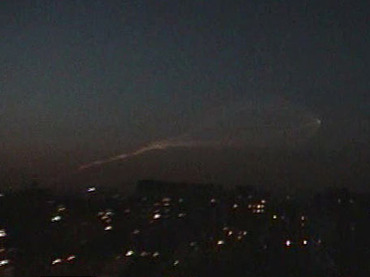 That picture is one of a second stage firing of a rocket (and no, NOT the North Korean one), the type of which has been discussed many time here on ATS. At the altitude it has, it wouldnt crash anywhere near the photographer even if the engine stopped moments after that photo was taken.

posted on Apr, 13 2012 @ 10:24 AM
link
Looks like a test of some unknown vehicle if not a missile exhaust.
One good way to disguise a takeoff could be to mimic a well known missile.
Would there an application for such a mode of operation.
Who cares cause the project heads say what goes and we follow.
ED: It does look like the ship went into some kind of warp speed to spread
out the trail so much. And if it rotated might make a Norway spiral.
ED+ A big bang:
www.rumormillnews.com...