Christians, they love to talk about how loving, dutiful and compassionate they are, yet I have yet to meet ONE who does not practice hypocrisy to the highest degree. Their willful ignorance of the Bible combined with their two faced idealism to preach it, has made us sick, hasn’t it? For nearly two thousand years Biblicists have been lecturing people on the importance of adhering to the Bible’s teachings on ethics, manners, and morality. They quote Jesus and Paul profusely, with a liberal sprinkling of Old Testament moralism. The problem with their approach lies not only in an oft- noted failure to practice what they preach, but an equally pronounced tendency to ignore what the Bible itself, preaches. Christians practice what can only be described as “selective morality”.

So don't attack my morals with your mythical, fairytale BS. Thank you.
edit on 12-4-2012 by Samuelis because: (no reason given)

What about other religions? Why just Christians? You know that if they did quit there would be another group to pick up the slack?
edit on 12-4-2012 by satron because: (no reason given)

Should probably let him finish his post before jumping to conclusions.

What about other religions? Why just Christians? You know that if they did quit there would be another group to pick up the slack?
edit on 12-4-2012 by satron because: (no reason given)

This thread is probably in direct retaliation to another ridiculous thread, www.abovetopsecret.com...

posted on Apr, 12 2012 @ 06:02 PM
link
I saw this ad ran by a group of local ministers in North Carolina regarding a state constitutional amendment to ban gay marriage and was thoroughly impressed. This is what Jesus was talking about: 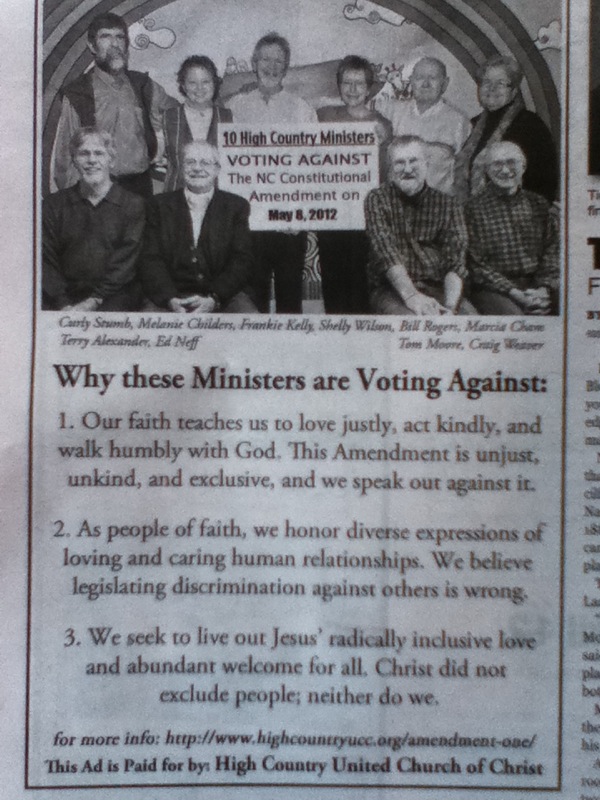 Should probably let him finish his post before jumping to conclusions.

I think I was spot on.


Some people will still hate this simply because it was made by religious people, regardless of the message at hand.

It's a good feeling,

we are all sexually immoral, homosexuality is not the only sexual sin.

I haven't seen a single hateful comment made by a Christian on here,


Well in my experiences the other religions don't seem to be as guilty of promoting hate and trying to tell us all how we need to live nearly as much as Christians. Many other religions seem to be much more willing to accept and allow a live and let live approach to exist than do a great majority of the people hiding behind the title "Christian."


It may seem that way, because you're sheltered.


So that makes it okay?
uh huh.


If you havent come to the conclusion that Hypocrisy is human nature. Then you have a good bit of living to do my good sir.

If you want to know about God, you might want to talk to an atheist. Heresy? Perhaps. But a survey that measured Americans' knowledge of religion found that atheists and agnostics knew more, on average, than followers of most major faiths. In fact, the gaps in knowledge among some of the faithful may give new meaning to the term "blind faith." A majority of Protestants, for instance, couldn't identify Martin Luther as the driving force behind the Protestant Reformation, according to the survey, released Tuesday by the Pew Forum on Religion & Public Life. Four in 10 Catholics misunderstood the meaning of their church's central ritual, incorrectly saying that the bread and wine used in Holy Communion are intended to merely symbolize the body and blood of Christ, not actually become them. Atheists and agnostics — those who believe there is no God or who aren't sure — were more likely to answer the survey's questions correctly.

This just about sums up the reasons why you (and I) get annoyed when being proselytized.

We know more about THEIR religion, yet they try to act 'above' us, and come across as very arrogant, and pompous.

I'm not talking about all religious people, just the preachy ones.

Honestly, if I know more about the Bible than you, do you really think you are going to "enlighten" me by quoting scripture?


You have already made your decision and have denied Christ. There is no further point in your discussing the issue unless you do it for 'entertainment' then there should be very little complaining going on. Since you are on the religious section of the forums, I take it, you are either here because you are agnostic or enjoy trolling.

After all, rarely are you able to be enlightened by scripture.


It may seem that way, because you're sheltered.


What do you mean by "sheltered" if I may ask?
My parents are Christians. I've always lived below the poverty line. My father was the "beat god into your children kind of guy." How exactly am I sheltered?

Originally posted by milkyway12
reply to post by ideasarebulletproof


You have already made your decision and have denied Christ. There is no further point in your discussing the issue unless you do it for 'entertainment' then there should be very little complaining going on. Since you are on the religious section of the forums, I take it, you are either here because you are agnostic or enjoy trolling.

After all, rarely are you able to be enlightened by scripture.


Actually I was not "In" the "religious section". There is a little thing called New Posts, and this one popped up, so I decided to add my opinion to the topic posted.

posted on Apr, 12 2012 @ 08:41 PM
link
A true Christian does not hate. Hate is against the teachings of Jesus Christ. The definition of a Christian is one that believes Christ is the son of God and died to pay the price for the sins of mankind. A Christian is to teach and spread the teachings of Christ and try to live a life that Christ would approve, though we fall short.
Modern evangelism often encourages judgement of others, along with other false teachings (as prophesied in the Bible) and this leads to ignorance of the true Christian religion and can evolve into hate of those against these false teachings.
My two cents worth. Incidentally I consider myself a Christian, I haven't been to church in years because of the reasons stated above. Very sad to me.
Peace All.!

posted on Apr, 14 2012 @ 05:59 AM
link
Christians in America, their behavior is aberrated because social division, distrust, disharmony, individualism, materialism, self interest and hatred is the American culture now in the post 911 atmosphere of false flag terrorism and racism. They are products of their environment, hypocrisy is guaranteed. I doubt there are many individuals in this country capable of legitimately following the teachings of christ without any major elitist distortion.