This is a clip from RT news which for anyone that doesnt know, is the first Russian 24/7 English-language news channel. This is main-stream news in Russia!

The video is a segment from a NASA live stream which appears to show 3 UFOs in a triangular formation (sound familiar?) filmed from the ISS. Of course, the sighting is followed by a poor explanation from the narrator who claims the objects are reflections from a piece of metallic cloth...

Dont get too excited! This sighting is nothing too special. I'm just posting because i feel it is important to try and catch NASA out whenever possible. Maybe one day they will relise they cant keep feeding us this B.S.

On a seperate note, does anyone else find it strange that all of these balloons, chinese lanterns, skydivers and now pieces of metallic cloth always manage to arrange themselves into a triangular formation? I mean, ever since the retired NORAD officer Stanley Fulham predicted that the worldwide UFO displays would begin in 2010, these formations have vastly increased and are still increasing in my opinion.

Fair enough some will be hoaxs but all of them? No. Something is happening. Things are heating up. And not just in the UFO department if you know what i'm saying.

posted on Apr, 12 2012 @ 12:34 PM
link
There will always always always be an an alternative excuse for UFO sightings, and it doesn't matter how low they have to stoop to come up with ridiculous explanations! Just as long as they can make you feel stupid for believing in little green men!

posted on Apr, 12 2012 @ 12:35 PM
link
I find it rather strange that these 'unmanned objects' can manage to make such precise formations as well.

I'm wondering if that was RT or NASA that did that.

posted on Apr, 12 2012 @ 12:36 PM
link
Nice catch! A reflective cloth now that is a winner! That is one of the more convincing piece of footage I've seen from the ISS.

posted on Apr, 12 2012 @ 12:41 PM
link
Its obviously some reflected space cloth because as i understand it space cloth is usually found in space.
/sarcasm/

Good video though, nasa and co has been explaining away astronauts stories since the first man up there

I really want to see the ones for astronaut eyes only, random catches on live feeds are cool but if there was a giant spaceship from another planet up there messing with the ISS why does nasa even have a public live feed? 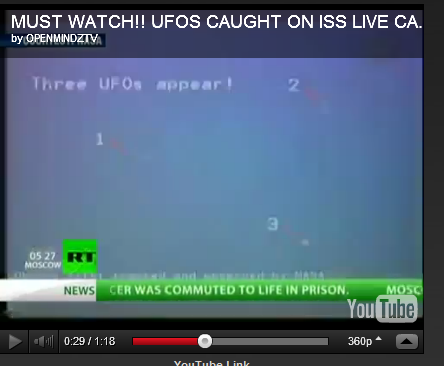 seems like things are really at full blast on the UFO front, whether real or manipulated, looks like disclosure is getting close...are they getting ready to play "the last card"?


It's been discussed and already ridiculed because there's a flash in the video of a blue-background, where the original uploader, made reference to where these objects were. It happens roughly around.29 seconds into the video. It's no big deal but it was big enough to debunk.

NASA will simply stop broadcasting. Similar to what they did with the SS missions after UFOs kept appearing back then too.

If we're seeing incredible flying vehicles here on Earth, there should be no shadow of DOUBT that astronauts are seeing them too. In fact, a few astronauts concurred. Story Musgrave and Edgar Mitchell to name two.


think its either RT or the middle party involed thatwould of told RT as it doesnt show the NASA logo at the top right corner like the rest of the vid unless its a still thats been taken......
WHO YOU GONNA CALL??
PHAGE!

This is what I was referring to. Thanks but what people fail to include is, the woman from NASA already collaborated this find by making mention of it. What?.....is her voice morphed into the transmission too?

What I understood was: the person who originally found this feed, made mention and his own outline as to where these dots/objects were.

But like I said, if it wasn't for NASA themselves TALKING about it then I'd say that blue-background shot is suspicious. But, it's not.

It does show the logo. Or, am i misunderstanding what you are saying?


think its either RT or the middle party involed thatwould of told RT as it doesnt show the NASA logo at the top right corner like the rest of the vid unless its a still thats been taken......
WHO YOU GONNA CALL??
PHAGE!


Don't get me wrong, Phage is my favorite enemy on here but what Phage does is take educated guesses then presents them as facts. He's also a great Googler too. But after all, a day without Phage is like a day without...turmoil. But he is a great guy though.


lol the weather balloon answer was not working up there for this display.. nice find

posted on Apr, 13 2012 @ 11:39 AM
link
reply to post by Human_Alien
Thanks for the reply Human_Alien. Any chance of a link to the thread where this was debunked? Would like to see what other ATS'rs thoughts were on this and hopefully get some more details.

reply to post by dedpope
Haha you got that right!

posted on Apr, 13 2012 @ 02:56 PM
link
I'm not sure, the triangle formation is different. I keep a footage from Europe (not mine) that is 1:1 triangle formation compared to the one at Illinois over Tinley Park, this one here has a little different formation. The ones identical had shape of scalene, while here they are at the same distance towards each other.

this is from 2009.
it was on﻿ Fox News as well.
i uploaded it a year ago:
"UFO Follows NASA Space Shuttle Atlantis - Fox News"
ObjectiveObserver4