posted on Apr, 10 2012 @ 11:20 AM
link
Okay, I realize this isn't any type of top secret news or anything but I think this issue is going to have a huge impact on society in the long run. We are constantly having crap like this crammed down our throats and are expected to be okay with it under the guise of Political Correctness. I say bollocks to all that jazz.

This is ridiculous. The title of the pageant is MISS universe. Not Mr. Woman who Used to be a Man Pageant. I'm all for personal choice and the right to choose for your own person, but what I don't agree with is softening this issue and making this more accepted among the general society.

Why is it okay to tell our little boys it's okay to be little girls? Where does this end?

Transgender women have notched a key victory in a bid for equality, as the Miss Universe Organization announced today that they will be allowed to compete in its pageants.

The move follows a bitter controversy that erupted after transgender Miss Universe Canada hopeful Jenna Talackova was disqualified from competing in her country's pageant for not being a natural-born female.

I realize this topic will garner some controversy, but I'm curious to know what you all think. I for one am COMPLETELY AGAINST this. Get your own damn beauty pageant.

The part that REALLY irks me:
(emphasis mine)


"We want to give credit where credit is due," Paula Shugart, president of the Miss Universe Organization, said in the statement. "And the decision to include transgender women in our beauty competitions is a result of our ongoing discussions with GLAAD and not Jenna's legal representation, which if anything delayed the process. We have a long history of supporting equality for all women, and this was something we took very seriously."

All WOMEN - not all men who want to become a woman because they don't feel comfortable with themselves living as a man.

Ugh - Flame me if you want, but this really takes the cake for what this world is becoming...

posted on Apr, 10 2012 @ 11:27 AM
link
a pre requisite to entering the competition should be "you have to be a woman from birth" the last thing I want to see is guys who turned into girls, and wondering who is who on stage. I think it is gross, and they have gone too far. Next thing you know they're going to allow flamboyant homosexual men into the competition. For cryin out loud, its called the Miss Universe Pageant, not "I Used To Be A Guy, But, Now I Am A Miss, (Universe Pageant)." some things shouldnt change PERIOD..

Originally posted by becomingaware
If I think its hot, does that make me gay? Haha.

So come back and let us know if you think he is hot or not!

I think letting him compete is just odd....I mean it's supposed to be Miss Universe...not maybe Miss or Mr. Universe!

ETA: Actually here is the dude/gal...whatever you call it: 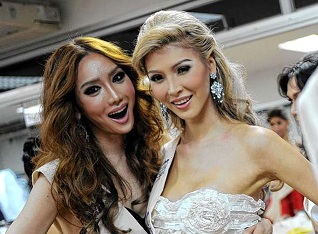 Originally posted by becomingaware
If I think its hot, does that make me gay? Haha.

if you're asking my opinion honestly, I would have to say yes......

posted on Apr, 10 2012 @ 11:31 AM
link
Well, to be honest, if you're good feminine enough and passable enough as a transgender to actually make it to Miss Universe, then my frank opinion is that you deserve to be there.


The subject has already been beat to hell in another 32 page thread... Transgender contestant in Miss Universe pageant

I support her right to be recognized as a woman. I think that as a doctor Ron Paul would as well.

posted on Apr, 10 2012 @ 11:31 AM
link
Yup, most were against it but the Pageant holder Donald Trump, changed his rule, probably to get support from Transgender side of the populations. You don't always get a transgender to hit up media this big, so you gotta use it while you can. Hehe

I against letting this MAN compete in a woman's competition, whats next? a Transgender Women in all all Female Martial Arts? Hey! i know who to bet on.
edit on 4/10/2012 by luciddream because: (no reason given)