posted on Apr, 10 2012 @ 06:25 AM
link
Was going to post something about consensus reality, but found this instead after about 5 mins and thought it was way more interesting :

I've only read VALIS by him but that alone was one amazing book with a lot of issues about reality in it. Also saw A Scanner Darkly and thought that was brilliant.

So maybe he was onto something back then, as I suspect a lot of others were. Some will always say he was just mentally ill, delusional, on drugs, or a mixture of the three, but I think he was definitely working something out.

Originally posted by Samuelis
Ooooo I wanna watch but can't from phone.
What's it about?


Originally posted by Samuelis
Ooooo I wanna watch but can't from phone.
What's it about?


Yeah he's talking about how the realities that he'd written about over 27 years of his work could in fact be related to our actual reality, and that there's something wrong. He also speaks about batches of memories that he recovered at certain stages, and right at the end that he believed a variable in the past had been changed and an alternate world branched off from ours.(!)

Originally posted by bjarneorn
If nothing else, it tells you that MATRIX was not an original work.

It wasn't, it was inspired mainly by the book Neuromancer I think, then also other things like the anime Ghost In The Shell and the comic book series The Invisibles. The Wachowksi brothers were pretty open about influences from all types of other works from the off though as far as I remember.
edit on 10-4-2012 by robhines because: added


Originally posted by bjarneorn
If nothing else, it tells you that MATRIX was not an original work.


It wasn't, it was inspired mainly by the book Neuromancer I think, then also other things like the anime Ghost In The Shell and the comic book series The Invisibles. The Wachowksi brothers were pretty open about influences from all types of other works from the off though as far as I remember.


There's also a heaping helping attributable to Nozick and his 'Experience Machine". Wiki provides a quick look at this philosophical model. en.wikipedia.org....

As to Phillip K. Dick, another one of his creations was made into "Blade Runner". I keep promising myself to read his stuff...thanks for the reminder.

He seems very sincere in his belief. I'm taking him at face value.


There is no off button on genius.

That video had been posted over a year ago, and since I posted this thread the whole youtube account just happens to have been deleted.

What a co-incidence, eh? That is unreal. Screenie : 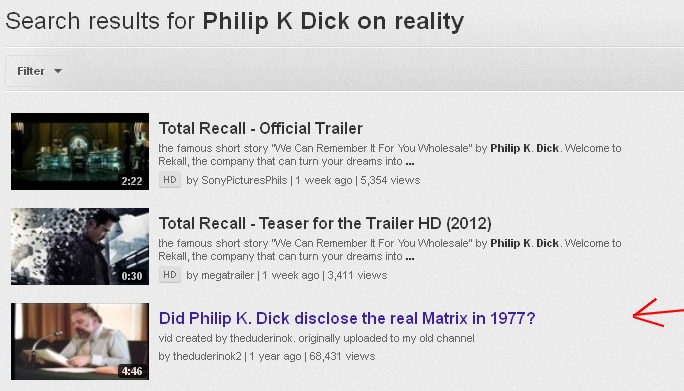 Will post again if I find another copy.
edit on 10-4-2012 by robhines because: added


Will this one just happen to go down too? The other channel will probably come back now to make me look stupid.
edit on 10-4-2012 by robhines because: added

posted on Apr, 10 2012 @ 05:40 PM
link
Just to note : the video in the first post doesn't work because even though the account had been around for over a year, it went down a few hours after I posted the video. It's been reposted in the post above this one though.


Originally posted by bjarneorn
If nothing else, it tells you that MATRIX was not an original work.


It wasn't, it was inspired mainly by the book Neuromancer I think, then also other things like the anime Ghost In The Shell and the comic book series The Invisibles. The Wachowksi brothers were pretty open about influences from all types of other works from the off though as far as I remember.


There's also a heaping helping attributable to Nozick and his 'Experience Machine". Wiki provides a quick look at this philosophical model. en.wikipedia.org....

As to Phillip K. Dick, another one of his creations was made into "Blade Runner". I keep promising myself to read his stuff...thanks for the reminder.


I Love P K Dick read all his books novellas short storys ect. This was the one he wrote that became blade runner en.wikipedia.org...


Theduderinok is always posting cool videos on reality. Looks like he got another copyright infringement :/ He was posting stuff the past few weeks. Anyways this reminds me I've gotta look into PKD's stuff, haven't read or watched his books and movies yet. Thx for sharing!

posted on Jul, 4 2012 @ 09:39 PM
link
I have seen this video before. Interesting that it was taken down. I have read probably the majority of PKD's novels, and am currently reading 'The Exegesis of Philip K Dick' which he wrote over a long period of time from when he had his mystical experience, some of which is covered in Valis.

I have always been fascinated by Dick. For one, i identify with and enjoy his stories. For another, his philosophy in many ways is unique, yet a lot of it makes sense to me like few other thinkers, authors or people do. Reading his Exegesis is quite the experience, i can almost feel his madness rubbing off on me, it is waaaaay out there. Don't get me wrong, a lot of it really hits home for me and makes sense, which is really why if find reading it unnerving.

I hear him spoken of as a gnostic quite a bit, and he himself agrees in part with that label in his Exegesis.

Among the highlights of the Dick drama to me are; 'Flow My Tears, the Police Man Said', a book he wrote and then later found out was almost identical in character/plot/storyline to a scene from the 'Book of Acts' in the bible. He also claimed later to meet people who had both the same names as character from this book, and seemed to him to have very similar qualities to said characters, and living out the final scene of this book in an identical real life situation. Talk about synchronicity lol

He was 'beamed' with information about his son's health which lead to a hospital visit that likely saved his son's life.

Sure, a lot of what he says is pretty out there, but the combination of madness and mystic which Dick seemed to be rings true to me because i just feel his vibe is sincere, honest real. And his writing has rung the proverbial bell too often for me to doubt his authenticity. Don't get me wrong, i think he is confused and delusional some of the time, which makes him so confusing and interesting at the same time. A genius, yet still a bumbling crazy all too human person.

From the fair amount i have studied him through biographies, interviews, etc. and of course most of all his writing itself, i have come to the conclusion that he is, in my opinion, the real deal, for better or worse, and unique in that he was a science fiction author that lived a life seemingly as interesting and strange as the stories that he wrote, which are all pretty strange and amazing to begin with. Blade Runner, Total Recall, Minority Report, Next, Paycheque, Screamers & The Adjustment Bureau were all movies based on either short stories or novels by Dick. And of course A Scanner Darkly.

He plays around with time often in his stories, as well as reality He writes of something he called 'orthogonal' time in his Exegesis, which he differentiates from linear time. I don't know what to make of what he writes half the time, or even how to properly explain it. But just when i think he's lost me, he starts quoting scenes from Wagner's 'Parsifal' and hooks me on again with some insight that clicks and makes my head spin.

He is one of my favorite authors, and persons of interest. Another two things i personally find in his favor are his love of Carl Jung and Plato (as well as other historical thinkers/writers/philosophers), and the fact that he rebuffed his mother's attempts to get him into Scientology, and makes some critical commentary against it.

Anyways, good to see some Phildickian love on these forums. Good thread. I like the part where his girlfriend looks embarrassed when the camera pans to her, yet Dick goes ahead and drops conceptual bombs on the audience from the stage without shame or restraint. Will watch the vid again actually.

Other random fact about Dick, he loved France. One of his favorite novels apparently was 'Madame Bovary' (which i bought at a second hand book store because of this fact, though admittedly i haven't gotten too far into it.)

posted on Jul, 4 2012 @ 09:58 PM
link
That he used I CHING to plot the story The Man in the High Castle really astounded me. The guy was a creative genius.

posted on Jul, 4 2012 @ 10:26 PM
link
He is right. Sorta. Time does not go in straight lines. It is not always past -> present -> future. Sometimes it loops back or stops or speeds up or slows down. Humans can only perceive time moving forward. So when it goes any other way we cannot tell other than a weird sense of deja vu or something similar.

posted on Jul, 4 2012 @ 10:28 PM
link
Not a SF BUFF but I love to read an philip K Dick is brilliant he has written many short storys an novellas so you can ease into his style an imagination....Ian Banks also a great writter whom writes non SF Wasp Factory an SF although even his non SF stuff is off the wall weird but compelling....O P Thamkyou for posting this vt interesting

posted on Jul, 5 2012 @ 01:11 AM
link
I'm not sure how to place links, or if i am even allowed to yet due to my low post count and overall noob-iness, but here is the address of an interesting PKD interview from 1979 that i had not heard yet. About half an hour in, and its pretty interesting so far, at least i find it interesting.

I started reading Dicks work not long ago and became fascinated with his mind. I hadn't heard of the Exegesis and will look it up- thanks for the reference!

I also didn't know anything about him and really appreciated the other info you included in your post!
I am a fan of Jung and live in France, so enjoyed these particular facts....
edit on 5-7-2012 by Bluesma because: (no reason given)


Your welcome. I bought it online as a ebook, i'm about half way through.

Speaking of 'Philip K Dick on reality', one of my favorite quotes from him is;

"Reality is that which, when you cease to believe it, doesn't go away."

That always made sense to me.

-edit- i should add, he tends to repeat himself quite a bit, it may not be your style its nothing like his books, and gets a little tedious in parts. If you can maybe read a bit of it first.